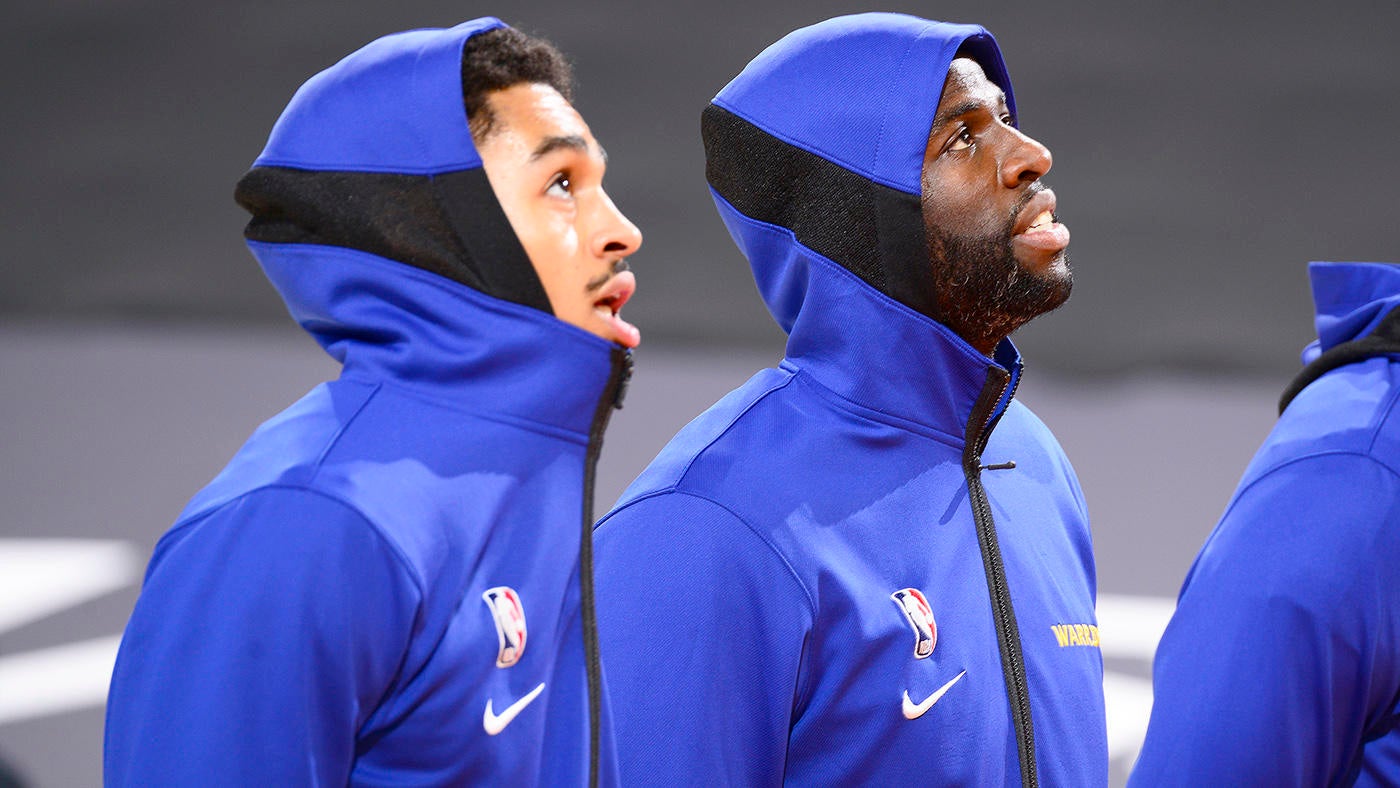 SAN FRANCISCO — Whether verbal or physical, altercations between teammates come with the territory of sports at any level, from pee-wee to professional. However, there’s a level of respect that needs to be maintained, and the line is different for every team. It’s clear that Golden State Warriors forward Draymond Green crossed that line when he punched teammate Jordan Poole during practice last Wednesday — an act that sent ripples through the Warriors organization.

Known for his fiery, passionate disposition, the 32-year-old Green has gotten into several midgame verbal spats with teammates that have been caught on camera during his tenure with the Warriors, not to mention his reputation at practices. But he crossed the line when he punched Poole, and he’s facing the consequences.

Green, Stephen Curry, coach Steve Kerr, and general manager Bob Myers have all spoken publicly about the incident. Here is a rundown of everything they’ve said about the altercation.

Green has been fined, will not be suspended

After Tuesday night’s preseason victory over the Portland Trail Blazers, Kerr explained that Green has been fined an undisclosed amount for punching Poole at practice, but there will be no suspension. Green, who has been away from the team since the incident, is expected to rejoin practice on Thursday and could play in the team’s preseason finale on Friday against the Denver Nuggets.

“We feel like this is the best way, after assessing everything, for us to move forward,” Kerr said on Tuesday. “It’s never easy. No matter what decision you make in a situation like this, it’s not gonna be perfect. This is the biggest crisis that we’ve ever had, since I’ve been coach here — really serious stuff.

” … We take great pride in what we’ve built here — the continuity, the culture — and there’s no way around it, that culture has been damaged by this incident. And so you have to work to repair that. You have to find that vibe again, every day.

” … Draymond and I have been together for eight years. We’ve had plenty of run-ins. We’ve won championships together, we’ve lost championships together. We’ve been through an awful lot together. I trust him. He broke our trust with this incident, but I’m giving him the benefit of the doubt because I think he’s earned that — and I think our team feels the same way. So he knows he needs to regain that.”

Green and Poole had ‘great discussion’

While details of their conversation were not provided, Kerr said that Green and Poole had a discussion, and that Poole’s input was instrumental in Green’s ultimate punishment.

“Jordan, obviously had to be involved in this,” Kerr said on Tuesday. “Jordan and Draymond got together and had a great discussion that, I think, will help us move forward. So after this entire week of everything and just assessing everything, this feels right.”

While the Warriors contemplated the specific punishment, Green remained away from the team. He explained the absence on Saturday.

“I’m going to continue to stay away, as I’ve been away. And, you know, continue to do work on myself, as I always like to do. But also just to give guys space. It’s a big deal. It’s not like you just kind of keep on pushing. The reality is there is no right or wrong time. … But in saying that, I do want to give my team their space, I want to give Jordan some space. But also just take a few days, or whatever that is, and just continue to work on myself and think about the things I need to think about, and really just take some time to let everything breathe.”

An initial report of the altercation said that Green “forcefully struck” Poole during a heated argument. On Friday morning, video of the incident was leaked by TMZ, showing that Green threw a full-fledged punch, which appeared to strike Poole in the face and knock him to the floor. Green approached Poole from the sideline of the practice court, bumping him with his chest, and Poole responded by shoving Green, just prior to Green throwing the punch.

The Warriors are exploring “every legal course of action” to figure out how the video was leaked, according to ESPN.

“I don’t know who released the video. I am very thankful to the Warriors organization for taking it as serious as they have and launching the investigation that they have, because, quite frankly, they don’t have to. They’re not obligated to launch an investigation for something that I did wrong.”

Poole did not suffer major injury

Since the incident, Poole has not missed any practice time or preseason games. It appears he was not seriously injured by the punch.

Myers said that Green apologized to the team last Thursday for his behavior.

Green also apologized publicly on Saturday during his press conference.

“I was wrong for my actions that took place on Wednesday. And for that I have apologized to my team. I have apologized to Jordan. … His family saw that video. His mother, his father saw that video. … And so for that I apologize to his mother and his father, and his family and his friends that care for him, because that is a sense or level of embarrassment that they have to deal with too.

“I apologize to this organization. We just won a championship — in nine days, 10 days there will be a ring ceremony. My family will be here, [Poole’s] family will be here. I’m sure they’ll be here. Quite frankly, that’s an elephant in the room. … On a night where it should be celebration and love, and it still will be, but there is, like, this dark cloud in the room, and I caused that. So I apologize to his family, and just what they’ve had to deal with over the course of the last 24 to 48 hours, and I will do what I have to do to make that right.

“I apologized to my family as well, for what they had to go through.”

Green was in bad space mentally

During his press conference on Saturday, Green said that he was in a “very, very bad space mentally” when the incident with Poole took place.

After news of the altercation between Green and Poole broke on Wednesday, a tweet from Chris Haynes of Yahoo Sports suggested that the incident could have stemmed from a change in Poole’s attitude as he negotiates a potential extension with the Warriors. Kerr, Myers and Curry categorically denied the report, saying that Poole has been great during camp so far. Green followed up by saying that the incident with Poole had nothing to do with their respective financial situations.

“The specific tweet put out yesterday about insinuating that JP’s attitude or something has changed since he’s been in this training camp or even whatever time they’re talking about. It’s absolute B.S.,” Curry said. “Andre [Iguodala] addressed it yesterday with his tweet, and we can kind of leave it at that. JP’s been great.”

“Jordan has been fantastic throughout camp,” Kerr said. “There was a report that I was made aware of last night that someone put out there that Jordan had an attitude at camp — nothing could be further from the truth. He’s been fantastic. So, disappointing to see misinformation out there, but I wanted to make sure I set the record straight on that.”

“Some of it, I would say from my vantage point, I don’t feel — and more importantly you should ask the players that you talk to —  I don’t think this was related to who’s getting paid and who isn’t,” Myers said. “I don’t sense that. Make your own conclusions. It’s probably more important what players think on that than what I think, but I don’t see it.”

“As far as, I’ve heard reports that, oh it’s over a contract, or him getting an extension or me getting an extension,” Green said. “I can assure you, I don’t count other people’s pockets, number one. And so that’s not something I would ever start doing. And the way I was raised, that is simply hating on another man’s situation, and that’s something that you just don’t do. The one thing that I can assure you is that that had absolutely nothing to do with anything.”

Following the incident, Myers said that he spoke with Green and expressed his disappointment, but he was optimistic that Green and the team will be able to get past it.

Curry and Myers both said they feel the team will be able to move past the incident with relative ease. They’ve dealt with other situations in the past, most notably the on-court blow-up between Green and Kevin Durant in 2018 that resulted in Green’s suspension, and Myers feels that makes them more equipped to deal with the current situation.

“It’s one of the best vibes that we’ve had in my 12 years here, as far as camp and health and mental health and camaraderie,” Myers said. “But, it’s unfortunate, and I’m not gonna deny it. It will take some time to move through it, but we’ll move through it and move forward. And I’m confident that we will. We’ve got a good team, we’ve got good leadership. We’ve got some guys that have been here a long time. And this isn’t our first thing that’s happened, our first sense of adversity. We’ve been through some of this before. Don’t like going through it, but it’s part of the NBA and it’s part of sports and it’s kind of what it is.”

“The vibe today at practice was great,” Curry said on Thursday. “Trying to take advantage of this week and make it about basketball, our preparation for the season. It’s obviously an unfortunate situation that — you know, getting asked about it — a situation that could have been avoided, but there’s a lot of trust in the fabric of our team, who we are, who we know those two guys to be, and how we’ll get through it and try to continue to make it about playing great basketball. The personal dynamics and stuff will work themselves out, and that’s part, again, of the culture that we’ve built here. I like how we responded today. Had a great practice, good energy. Try to keep that as the focus as we move forward.”

“Most importantly, my brothers on this team, who I’ve apologized to already, but, for me, that is the task at hand — to rebuild trust in our locker room, to pull everything back together as it needs to be pulled together in order to compete and defend a championship,” Green said on Saturday. “And although that is the least of my worries right now, it has to stay at the forefront, most importantly. Because everybody put the work in to compete for a common goal, and I can’t allow myself to be the reason that that doesn’t happen.”

Give the Warriors credit for addressing the issue head-on. They could have easily refused to discuss the situation, but they provided some clarity and insight into the team’s headspace following the incident. For now, it seems everyone is ready to move on, but we will have to monitor the situation as the Warriors prepare to begin their title defense, starting with NBA opening night on Oct. 18 against the Los Angeles Lakers.