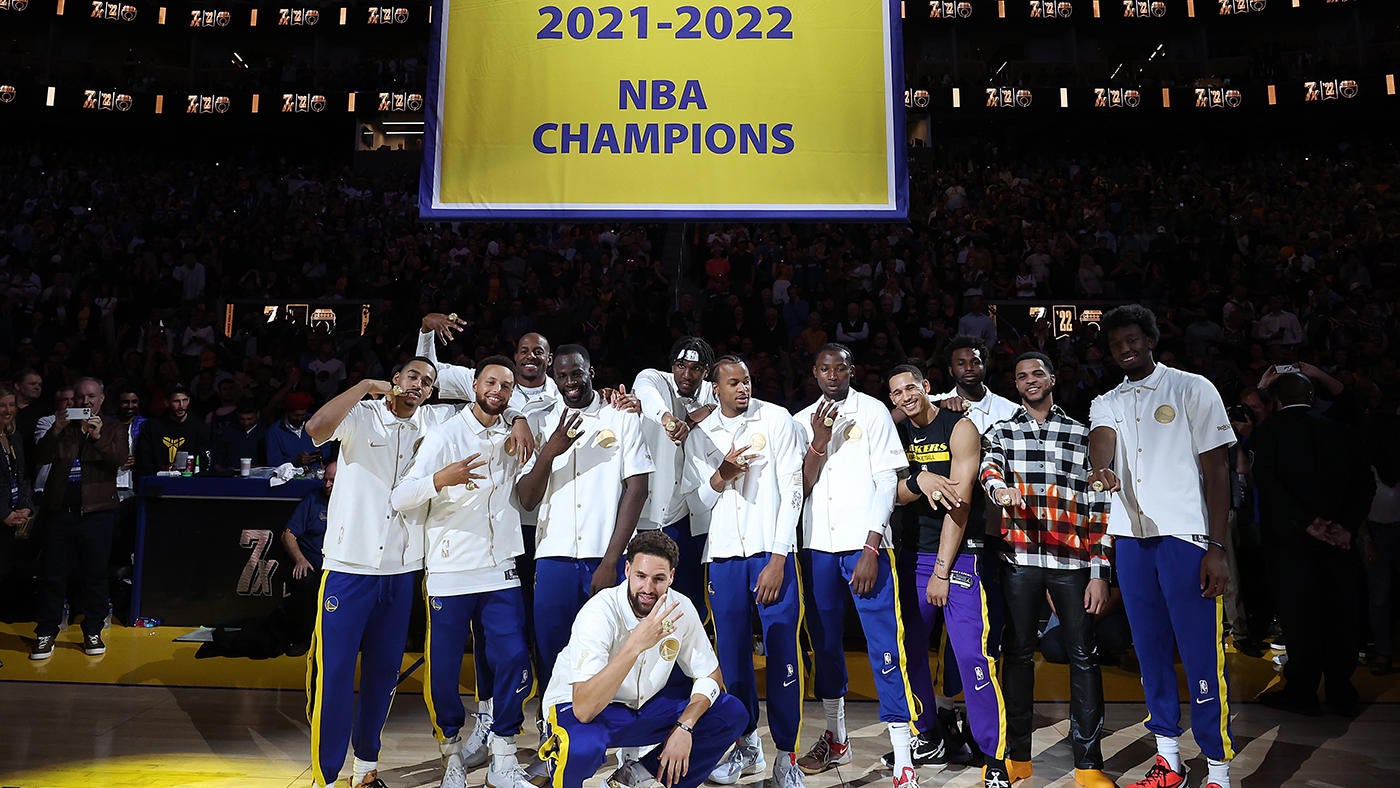 SAN FRANCISCO — The whole thing had kind of a high school graduation feel. But instead of a 16-cent paper diploma from Kinko’s, the Golden State Warriors received championship rings — well, “medallions,” as head coach Steve Kerr dubbed them because of their gargantuan girth — complete with 16 carats of yellow and white diamonds.

One by one, the instruments of what some members of the organization called the most meaningful of the team’s four championships over the last eight seasons were called forward to receive their bejeweled symbols of their accomplishment. As each player was announced, from Quinndary Weatherspoon to Juan Toscano-Anderson to Stephen Curry, memories of their contributions, no matter how big or small, flooded the arena. The Warriors’ motto, “Strength in Numbers,” is never more evident than on ring night.

The roll call didn’t stop there, however. As the Warriors marched to a 123-109 victory over LeBron James, Anthony Davis and the Los Angeles Lakers on Tuesday, the first night of the 2022-23 NBA season, each significant member of the roster that hopes to hoist yet another Larry O’Brien Trophy next June got a chance to audition their skills.

First there were the vets — those whose value to the team is unquestionable.

Curry started off slowly (by his standards), but finished with a flurry, scoring 17 points in the second half on 4-of-8 3-point shooting. His shining moment came late in the fourth quarter, first with an up-and-under move to fake out Davis for a layup, followed by an and-one 3-pointer on the very next play, after which he lay on the floor like a he was making a snow angel on the hardwood.

As for the other Splash Brother, Thompson treated us to one of his vintage shooting flurries in the third quarter, scoring seven straight points in just over a minute to start the frame.

Andrew Wiggins, who took a discount on his $109 million extension because of his contentment with his fit and the winning culture in Golden State, hit two dagger step-back 3-pointers just when it seemed like the the Lakers might make a late, improbable comeback.

Kevon Looney did what Kevon Looney does, putting up modest counting stats (seven points, six rebounds, two assists), but finishing at a team-high plus-30 in his 21 minutes.

“He’s just really good,” Kerr said after the game. “The first thing I said to the coaches when I looked at the box score was like, perfect Kevon Looney line.”

And then of course there was the connection everyone was waiting to see — the one strained relationship that threatens to derail what appears to be a strong chance at a title defense — Draymond Green and Jordan Poole. Both said that Warriors observers needn’t worry about the on-court chemistry between the two, and they proved it with one of the signature highlights of opening night, Poole’s picture-perfect pocket pass to Green for a layup in the second quarter.

Poole deflected after the game when asked about how their relationship has mended, or not mended, since the punch, instead saying that they focused on winning the first game of the season.

Green-Poole drama aside, we know what to expect from the Warriors mainstays, including Andre Iguodala when he’s finally ready to play. What makes this team’s upside so intriguing is the cast of characters, mostly of the greenhorn variety, that have been enlisted to support the core figures. They, like the veterans, each had a moment in the spotlight Tuesday night.

Playing in his first NBA game since April of 2021, 21-year-old 7-footer James Wiseman used his quickness and strength to throw down a two-handed dunk out of a pick-and-roll, much to the delight of the crowd, which was still buzzing off the championship elixir.

After the game, Wiseman expressed humble gratitude to be back out on the court, but now he’s tasked with earning backup center minutes that appear to be there for the taking.

“That comes with a lot of reps,” Wiseman said when asked how he can become a regular contributor. “I haven’t played in one-and-a-half, two years, so it’s gonna take time, but I’m gonna get there eventually.”

Eight-year veteran JaMychal Green, the lone Warriors sub who’s seen his 30th birthday, showed why the team brought him in this offseason by playing multiple positions and knocking down two of his three 3-point attempts, pulling down seven boards in the process.

Golden State’s other free-agent acquisition, Donte DiVincenzo, showed his versatile skill set in 21 minutes, but he endeared himself to the 3-point-hungry crowd when he knocked down a deep ball late in the fourth quarter on a feed from Curry.

Second-year wing Moses Moody, who nearly every Warrior says plays and behaves beyond his years, looked like he was going to be the odd man out Tuesday night. Kerr said it’s very difficult to play 11 guys, and he was the 11th guy. Still, when he got into the game for a few minutes in the second quarter, he scored five points and hit a corner 3-pointer.

Finally there was Jonathan Kuminga — perhaps the Warriors’ most enticing young player — who visibly struggled in his 13 minutes, which Kerr chalked up to nerves. But even without a field goal, the 20-year-old showed how valuable he can be as a defender with his athleticism and versatility.

All of the puzzle pieces were on display. The picture on the back of the box is a second-straight NBA title, but the question is whether Kerr and the Warriors can perfectly fit them together by the time the playoffs roll around. A team with 11 players deserving of significant minutes is a blessing and a curse, and the Warriors understand that just one game into the season.

“You know there’s gonna be a couple injuries, you’re gonna hit some rough patches that, to be able to have that many guys to throw out there, it matters,” Curry said after the victory. “It’s a great luxury to have, but there’s difficulties that come with it, because people are gonna be pissed off coming off the court knowing they didn’t play that night. So you have to just be patient with it, and we’ve all gone through it at some point in your career.”

Patience is not something you often associate with a defending champion. Generally the rotation is pretty set, corporate knowledge instilled. These Warriors have young players and free agents off the bench that Kerr can twist and manipulate into endless combinations.

So you can expect to see different lineups and units every night, particularly to begin the season, as this version of the Warriors attempts to build the chemistry we all witnessed a few months ago when they snatched the title from the Boston Celtics. It likely won’t be a smooth ride, but that’s what differentiates championship teams from also-rans. Figuring out the secret sauce is going to be the key to the 2022-23 season.

“After tonight, the journey really begins in terms of knowing you’re gonna get everybody’s best shot,” Curry said. “You have some really talented teams that are gonna be gunning for you, so we’ve gotta be ready for it all. We know it’s gonna be a very long journey. But that’s why we play. That’s why we’re competitive. That’s why we work as hard as we do. Nobody’s just sitting there staring at that ring and be like, ‘Oh, it’s over.’ I don’t think anybody’s built like that.”