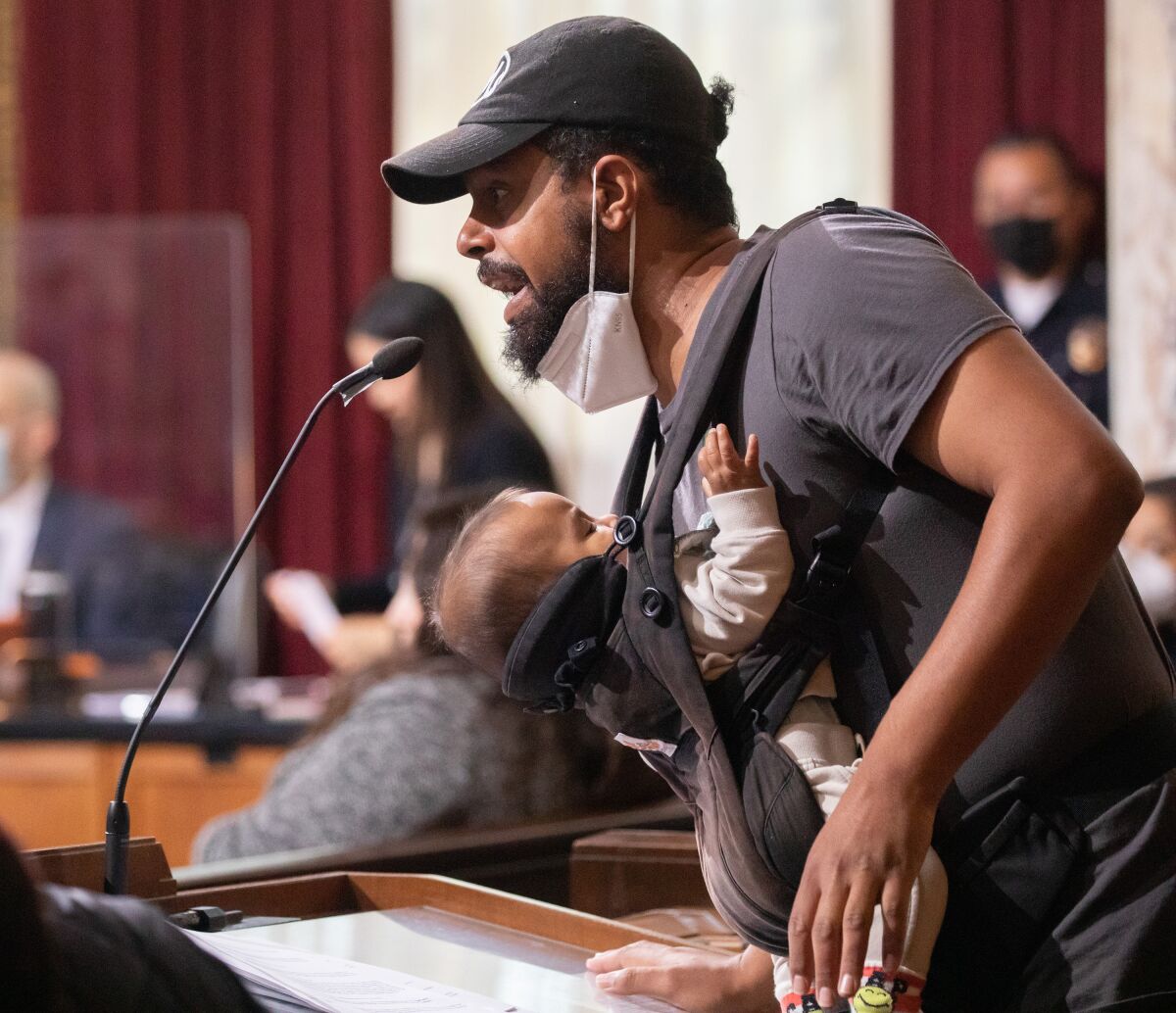 Hours after drawing protesters’ ire with his first in-person appearance in two months at a Los Angeles City Council meeting, Kevin de León was involved in a fight with an activist Friday night that was at least partially caught on video.

The council member said in a statement that he was assaulted. Activists said De León was the aggressor.

De León was at Lincoln Park for a toy giveaway and holiday tree lighting when the incident occurred, his office told The Times.

A video posted on Twitter on Saturday by RootsAction shows activists walking alongside De León inside the event calling on him to resign while Jason Reedy, an organizer with the People’s City Council, stands in front of the councilman holding his phone in his face. When De León reaches a door, someone pushes Reedy out of the way.

The video shows De León going through the door into a back room and trying to close it. But Reedy follows him and the councilman appears to push him back. Reedy, holding his arms up, stands nose-to-nose with De León as others mob the pair. There’s a brief struggle, then De León grabs Reedy, throws him into a table and attempts to push him out of the room.

In a statement, De León said that he, a staff member and a volunteer were “violently and physically assaulted by self-proclaimed activists at a community holiday event to the dismay of a multitude of families and children who were there to celebrate a Christmas tree lighting and to receive toys and food.”

“The escalating rhetoric is hitting a fever pitch, transcending from verbal threats into actual acts of violence and must end before more serious harm or loss of life occurs,” the statement said. “Violence is not free speech and has no place in politics or democracy.”

In a statement to The Times on Friday night, Shakeer Rahman, an attorney representing Reedy, called De León “a disgrace.”

“Video footage clearly shows him and his supporters initiating this assault while Mr. Reedy stands prone,” Rahman said. “Not only has Kevin de León lost all political legitimacy, his claims that he was the one attacked here simply underscores how he’s lost touch with reality.”

But De León’s chief of staff, Jennifer Barraza, said in an interview Saturday that the councilman plans to press charges against Reedy. De León said in an updated statement that Reedy and other activists present were at fault.

“I decided to try to exit the event to draw the disrupters away from the attending families and children and leave without further incident,” De León said. “We discovered Reedy and others had blocked all available exits. Once we were able to push open a door and try to get out, Reedy launched a pelvic thrust, followed by a headbutt to my forehead.

“My response, in defense of myself, was to push him off of me,” De León said. “In the ensuing struggle, Reedy struck me in the face with a closed fist, violently elbowed a female staff member, and injured a volunteer in front of horrified parents and children.”

The 30-second version of the video shared Saturday appears to show Reedy lightly bumping heads with De León before the councilman grabs Reedy and throws him into a table and attempts to push him out of the room.

Asked to respond to the claim of head-butting, Rahman on Friday called it “false.”

“Mr. Reedy was criticizing Kevin de León’s political record and echoing the widespread demands for him to resign,” the attorney said. “De León’s supporters then initiated physical contact by shoving him, and De León grabbed Mr. Reedy. Mr. Reedy had his hands up and made zero contact with anyone until after De León grabbed him.”

Barraza, De León’s chief of staff, said Saturday that after the events were captured on video, Reedy punched the councilman in the face. As Barraza tried to get in between them, she said, Reedy clipped her in the chin with his elbow.

“They absolutely show up to try to antagonize you, to try to get a reaction and this is really the first time that they’ve actually put real hands on someone,” Barraza said. “I think in this one they kind of lost control. They’re usually pretty good at pushing to the limits.”

“Me and my staff, we were at work. We were doing something so innocent, our job,” she said, as she started to cry. “The fact that we don’t feel safe at work, that’s not OK. It should never be OK for anyone.

“At this point, it’s a consistent pattern. I can’t work like this and that’s the bottom line,” Barraza said. “None of us can. It’s impossible for us to deliver the services for our constituents that we need to be delivering and do the work that we need to be doing on a day to day basis, when this is what keeps happening.”

Prior to the start of the video, De León was on a stage at the venue when protesters came in, said Pete Brown, a spokesperson for De León. He tried to move away but was pursued by the activists, who blocked off exits, he said.

A social worker who was representing a nonprofit organization Friday night said the event was wrapping up when the activists entered the venue.

He did not wish to provide his full name for fear of retaliation and identified himself only as Giovanni.

Giovanni told The Times that he saw Reedy try to head-butt De León but that the attempt was not successful.

Eventually, the social worker said, he pulled the council member into another room and away from the protesters.

Activist groups have been protesting De León’s positions on homelessness and videotaping him at public events for months prior to the uproar over the racist conversation leaked in October involving the councilman.

Some of those incidents have turned physical before, including one event in March where Reedy was verbally challenging De León and the councilman reached to cover Reedy’s cell phone camera with his hand, hitting the activist in the face in the process, Reedy said.

As the activists confronted De León again Friday night about why he hasn’t resigned, the councilman’s staff members and supporters began jostling them, according to Zen Sekizawa and Sheryl Quock, members of J-TOWN Action and Solidarity group who were there with Reedy.

Both said De León and his staff escalated the incident and that they did not see Reedy physically provoking the councilman prior to De León grabbing him.

“It was very alarming and not surprising coming from [De León],” said Sekizawa. “We’ve just experienced this side of him that he doesn’t like to show to the public. Now the whole world sees it.”

Quock, who recorded the video of the incident that the group made public, said that in the parking lot in the aftermath, De León’s supporters hurled anti-Asian racial slurs at the group.

She said that the group decided to show up at the holiday event because normal channels of public comment and protest by wide segments of the population haven’t led to De León’s resignation.

“He is clearly avoiding hearing what the people actually have to say about him holding this office and he is avoiding taking accountability for the harm that he has inflicted on our community,” Quock said. “Because he won’t listen to our voices, we have no choice but to bring our voices to him.”

Sekizawa and Quock also were critical of De León’s recent appearances at community-centered events, contending that the councilman is attempting to use non-controversial events as a steppingstone to resume his duties in office.

“He’s trying to hide behind these events,” Sekizawa said. “It’s very dangerous to have someone like him amongst children and amongst vulnerable community members. If he just resigned none of this would happen.”

Sekizawa said the group plans to continue protesting De León until he resigns.

Others had a different view on what happened Friday night.

Alan Ochoa, 36, was DJing the event when he said a group of around five people walked in and started shouting “you’re a racist” at De León.

Ochoa, who grew up in Lincoln Heights, said he doesn’t watch the news and hadn’t been aware of the controversy with the leaked audio.

De León was on the stage to give out toys to children when everything started. Ochoa said that De León got off the stage and tried to walk away but that the group started “getting into his face.”

“These little kids were starting to cry and scream and that’s when reality hit,” Ochoa said. “He was walking away, but these guys did not let him walk away, they were just in his way.”

Ochoa said he and his employee got involved after children started crying and running away.

“Once the kids get involved, that’s a big no no,” he said. Ochoa said he helped push the group from the auditorium.

“If you’re going to be proving your point, do it outside. Don’t go in there and mess up a whole community event,” Ochoa said. “As it is, we live in a low-income community and these guys are coming here who don’t even live there, messing it up for our community.”

In a statement later Friday, City Council President Paul Krekorian characterized the incident as an assault against De León, his staff and a volunteer, and an “intolerable” crime.

Krekorian said the incident would be “vigorously investigated” by the Los Angeles Police Department.

“No matter what disputes we may have with elected officials or our fellow citizens, violence like this is completely unacceptable,” he said. “In a free society political disagreements are unavoidable, and passionate discussion is necessary, but violence discredits the cause that employs it.”

Authorities have confirmed little about the incident and did not identify anyone involved.

Officers were called at 6:30 p.m. to the 3500 block of Valley Boulevard for a report of a large fight involving eight possible suspects, said Officer Drake Madison, an LAPD spokesperson.

The suspects had fled by the time officers arrived, Madison said. Officers took the report of one victim.

Firefighters were called to the location to assess an adult male, but the man was not taken to a hospital, said Nicholas Prange, a Los Angeles Fire Department spokesperson.

It was the first time he’d been in council chambers since mid-October, when fallout from a leaked racist audio tape roiled the city.

The question of when — or if — De León would return had loomed large at City Hall. His name was frequently invoked even as his seat remained conspicuously empty, with protesters regularly interrupting the thrice-weekly meetings to demand his resignation.

De León, who apologized in the wake of the tape, has been adamant that he has no plans to resign. He began to quietly reenter the public sphere about a month ago, attending food giveaways, holiday meals and other community events, but avoided council chamber until Friday morning.

Police told The Times earlier in the day that Reedy and another man were ejected from Friday’s City Council meeting out of concern that the men were about to get into a physical altercation.