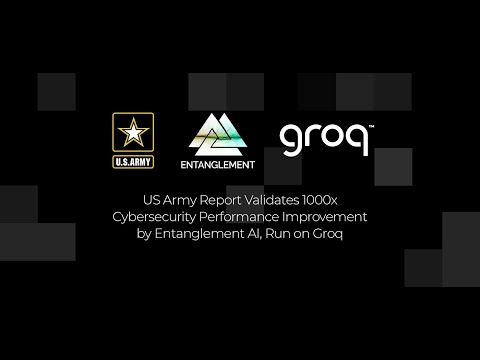 The research was performed under a CRADA, or Commercial Research and Development Agreement, between the Army Analytics Group (AAG) and Entanglement, a Groq customer. Entanglement leveraged Groq hardware to solve cybersecurity anomaly detection three orders of magnitude faster than traditional methods.

Jason Turner, CEO and founder of Entanglement commented, “We’re proud of our breakthrough cybersecurity anomaly detection work, recently validated by the US Army. Our algorithms need to run on GroqChip™ to achieve these results, outperforming quantum computers to realize 600-1000x faster results. Groq is the technology bridging our solution and quantum, helping us deliver on the promises of quantum today.”

Jonathan Ross, CEO and founder of Groq, added, “Entanglement uses quantum-based algorithms, but there isn’t a quantum computer anywhere today that can execute those algorithms as fast as GroqChip™. The result was cybersecurity anomaly detection at 120 million inferences per second, three orders of magnitude faster than with any other technology and something they could only achieve on Groq hardware.”

“In the course of performing a CRADA with the Office of the Secretary of the Army, Entanglement has demonstrated a dramatically faster and more accurate cybersecurity anomaly detection capability – with far fewer false positives – than any known technology… The Entanglement/Groq capability offers greater efficiency than traditional methods and can solve otherwise intractable problems at scale,” the report states.

Read the full report here. Entanglement plans to commercialize this technology, so if you’d like to learn more, join Groq and Entanglement at Supercomputing 22 in Dallas, Texas from November 13-18 at Booth 3047. For the latest company news and updates on Groq, follow us on LinkedIn and Twitter.