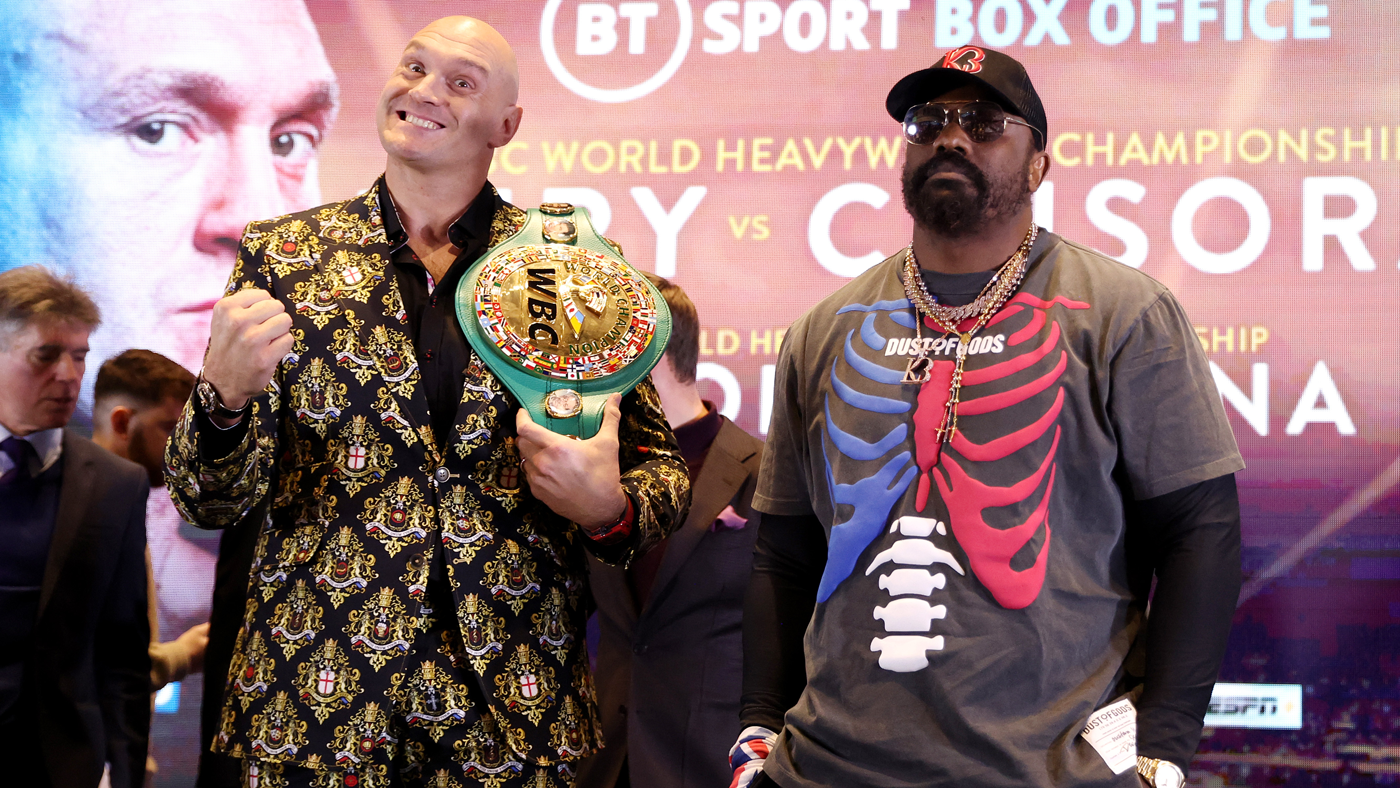 To say Tyson Fury has had a strange year would be an understatement. While it isn’t against the opponent anyone expected, Fury will return to the ring one more time before the year comes to an end. Fury will defend his WBC heavyweight title against Derek Chisora in a trilogy bout on Saturday at Tottenham Hotspur Stadium in London (ESPN+, 1 p.m. ET).

Fury’s year started reasonably enough, facing off with longtime mandatory contender Dillian Whyte in April. As expected, Fury made easy work of Whyte. What was not expected was Fury’s announcement in the ring that he was retiring from boxing.

That announcement kicked off a months-long stretch of Fury alternating between insisting he was actually retired and calling out fighters. It was during this stretch that the idea of a trilogy bout with Chisora was first floated by Fury. Just days after announcing he would be fighting Chisora, Fury again announced his retirement.

With this “retirement,” Fury vacated his Ring Magazine heavyweight championship, though he did not do the same with his WBC title, which made it clear he still planned to return to the ring.

“I’m back for more punishment. An idiot, really, but what can we do?” Fury said this week. “I can’t let it go. Maybe there is a doctor out there who can help me to let go of this thing because I’ve got this bull by the horns and I’m riding it. How much longer I can hold on for, who knows? What I know is at 34, I’ve had operations after operations, I’m in bits. How long can this continue for?

“I’ve lived a terrible lifestyle outside of boxing. I have ballooned up in weight and have had so many problems with the boxing game. I’m fighting fire with fire. They say you can’t burn the candle at both ends but I’m in the middle right now. I don’t know how much longer I can continue this for and that’s the brutal and honest truth.”

After Oleksandr Usyk defended his WBA, IBF and WBO heavyweight titles in his rematch with Anthony Joshua, Fury again ended his retirement, making it clear he was on the hunt for a bout to crown the first four-belt undisputed heavyweight champion. When it was clear Usyk would be out until 2023, Fury began negotiations to face Anthony Joshua in the biggest fight in British boxing history.

Of course, those negotiations fell through as Joshua claimed to be agreeing to all of Fury’s terms, but Fury continued setting seemingly-arbitrary deadlines before claiming Joshua and his team were too difficult to work with and that he would never again attempt to make a fight with the former two-time heavyweight champ.

And, with that, Fury circled back to a fight with Chisora. Fury took a unanimous decision over Chisora in July 2011 and forced Chisora’s corner to stop the fight after 10 rounds in their November 2014 rematch.

While Fury has since established himself as the best heavyweight on the planet and one of the top pound-for-pound fighters in the sport, Chisora has been struggling to stay relevant as a contender with a 7-5 record since 2017.

“I don’t care what is said. For me to give up, just because a newspaper says so, I can’t do that,” Chisora told a news conference on Thursday. “It is going to be the best first round in the heavyweight game ever, you’re going to love the whole show. We need the first round to be electric, so the place will be buzzing.

“On Saturday I’m going to go to war. I want to take what’s his and make it mine. Physically and mentally. It’s not going to be stinker, it’s going to be a great fight.”

While no boxing fan is salivating at the idea of watching a well past his prime Chisora challenge Fury for a world title, the champ gets what the champ wants. And all one can do is hope this fight is serving as a tune-up for Fury vs. Usyk in 2023.

The undercard sees the return of another rising heavyweight when Daniel Dubois takes on Kevin Lerena. Dubois holds an 18-1 record with 17 of those coming by stoppage. The 25-year-old Brit suffered his lone pro defeat in a step-up bout against Joe Joyce in November 2020 when he was stopped late in the 10th round. But Dubois has bounced back well from that loss with three straight wins by knockout since, including all three finishing before the fifth round. Lerena, meanwhile, is 28-1 with that lone defeat coming back in 2014.

Let’s take a look at the rest of the undercard for Saturday with the latest odds from Caesars Sportsbook before making a prediction and expert pick on the main event.

Honestly, it’s hard to treat this fight seriously. Chisora has not been better than Fury at any stage of their careers. Fury is now better than he’s ever looked, while Chisora’s best days are well behind him. Power is the last thing that leaves a fighter but even Chisora’s power isn’t a legitimate path to victory against Fury.

Yes, Chisora could land one perfect bomb that shuts Fury’s lights out. Deontay Wilder is faster and hits harder than Chisora and he couldn’t manage to keep Fury down across three fights.

Fury is going to do whatever he wants in this fight. That probably means putting on a bit of a show with his jab and defense until he feels like taking Chisora out in the middle rounds. Pick: Tyson Fury via TKO5

Who wins Tyson Fury vs. Derek Chisora III? And which prop is a must-back? Visit SportsLine now to see Peter Kahn’s best bets for Saturday, all from the boxing specialist who has netted his followers a profit of more than $4,000, and find out.