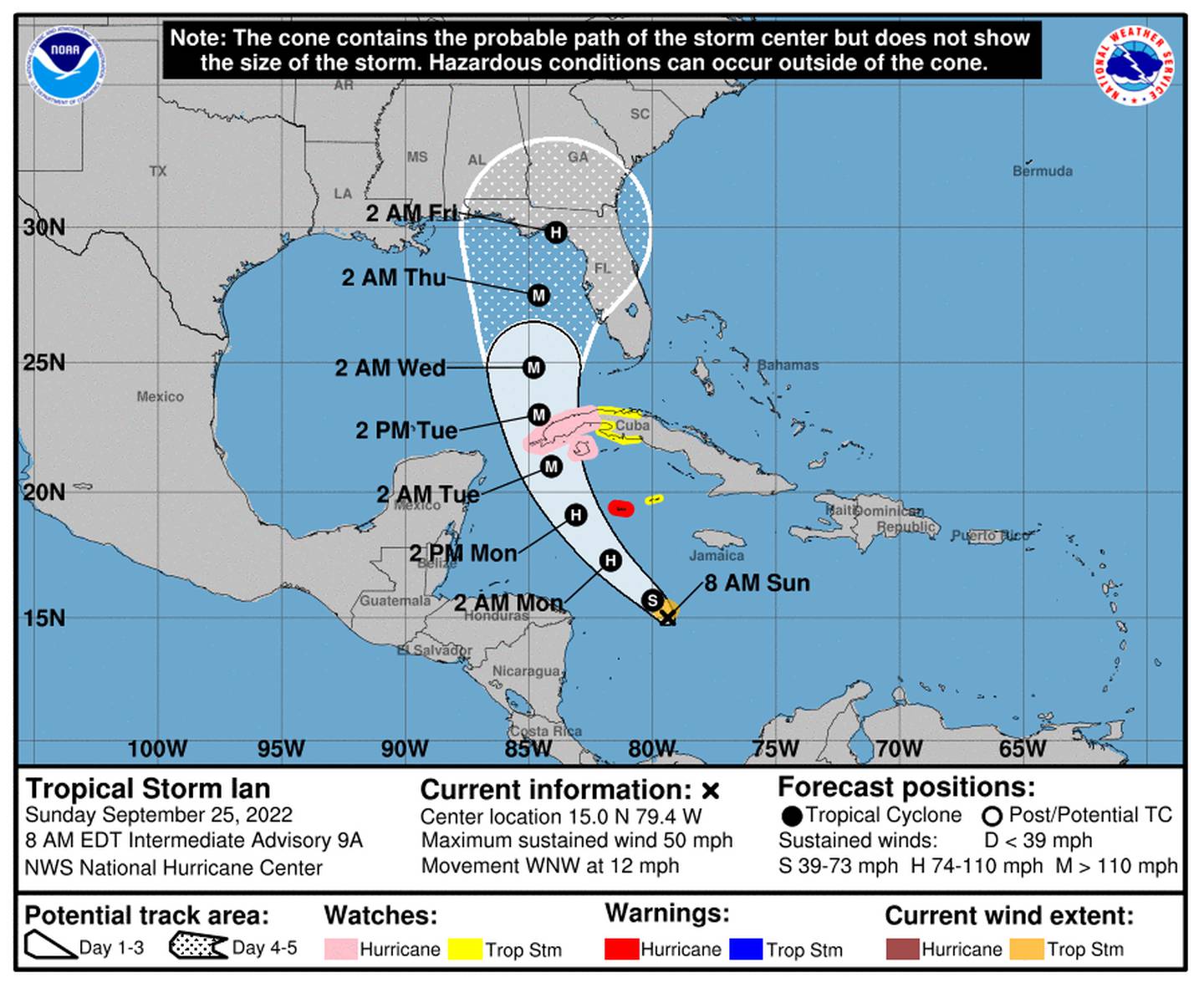 Tropical Storm Ian is expected to have “rapid intensification” later today, grow into a major hurricane in the next 48 hours and eventually hit Florida – but many questions remain including when, where and how strong the storm will be at the time of landfall.

In its 8 a.m. Sunday update, the National Hurricane Center said Tropical Storm Ian still had maximum-sustained winds of 50 mph. The storm was located about 320 miles south-southeast of Grand Cayman and 590 miles southeast of the western top of Cuba, and it was moving to the west-northwest at 12 mph. A hurricane warning is in effect for Grand Cayman and a hurricane watch is in effect for parts of Cuba.

“The NHC intensity forecast calls for rapid intensification to begin later today, and forecasts Ian to be a major hurricane when it nears western Cuba in about 48 hours,” the NHC said in its early Sunday update. By Tuesday, the storm is expected to become a Category 3 hurricane with winds of 120 mph and a Category 4 on Wednesday with winds of 140 mph.

Computer forecast models agree Ian will hit Florida, but don’t agree on where. “There are still significant differences regarding the exact track of the storm, especially after 72 hours,” the NHC cautioned.

Two models, the UKMET and ECMWF, show the storm will make landfall in west-central Florida. Two other models, the GFS and HWRF, show the storm moving more west and take Ian into the central or western Florida panhandle. There’s between 220-250 miles difference between the model tracks in the forecast for Day 4 and Day 5 for Ian, the NHC said.

The hurricane center’s current forecast track for the storm basically splits the difference between the different model sets with the NHC’s best guess.

“It cannot be overstated that significant uncertainty remains in Ian’s long-range prediction,” the NHC cautioned.

“Regardless of Ian’s exact track and intensity, there is a risk of dangerous storm surge, hurricane-force winds, and heavy rainfall along the west coast of Florida and the Florida Panhandle by the middle of the week, and residents in Florida should ensure they have their hurricane plan in place, follow any advice given by local officials, and closely monitor updates to the forecast,” the hurricane center said.

John Cangialosi, a senior hurricane specialist at the Miami-based hurricane center, said it was not yet clear exactly where Ian will hit hardest. He said Floridians should begin preparations, including gathering supplies for potential power outages.

“At this point really the right message for those living in Florida is that you have to watch forecasts and get ready and prepare yourself for potential impact from this tropical system,” he said.

Across Central Florida, residents were spending part of the weekend preparing for Ian’s possible arrival.

A Target store near Millenia had very few gallon bottles of water left on Saturday, as signs on the shelves limited purchases to four cases or bottles per customer.

“This is the third store I visited today,” said Maritza Osorio, who was leaving Target for a fourth location. “If not, we’ll have to try again tomorrow.”

5AM Update | Uncertainty in the long-term track & intensity forecast of TS Ian is higher than usual. Direct impacts to E central FL remain uncertain, but windy conditions & heavy rainfall will be possible into the middle of next week. Continue to monitor the forecast for updates. pic.twitter.com/e9uA7j42D9

There was fewer foot traffic through a Home Depot in the same plaza, with many people carrying water in their carts as others shopped for slabs of plywood to be used as shutters, along with other items.

Though it’s not yet clear whether, or how strongly, Ian will hit if it strikes Central Florida, people like Gary Wilson aren’t taking any chances. He’s had his hurricane kit ready with supplies weeks into the beginning of the season and was at Home Depot for final preparations, just in case.

On Saturday, Florida Gov. Ron DeSantis issued a state of emergency order for all of the Sunshine State – expanding an order he issued Friday that declared in an emergency in two dozen counties. DeSantis also mobilized the National Guard to assist with storm prep and recovery.

[ What supplies should you have in your hurricane prep kit? ]

“This storm has the potential to strengthen into a major hurricane and we encourage all Floridians to make their preparations,” DeSantis said in a statement. “We are coordinating with all state and local government partners to track potential impacts of this storm.”

President Joe Biden also declared an emergency for the state, authorizing the Department of Homeland Security and the Federal Emergency Management Agency, or FEMA, to coordinate disaster relief efforts and provide assistance to protect lives and property.

The president postponed a scheduled Sept. 27 trip to Orlando due to the storm.