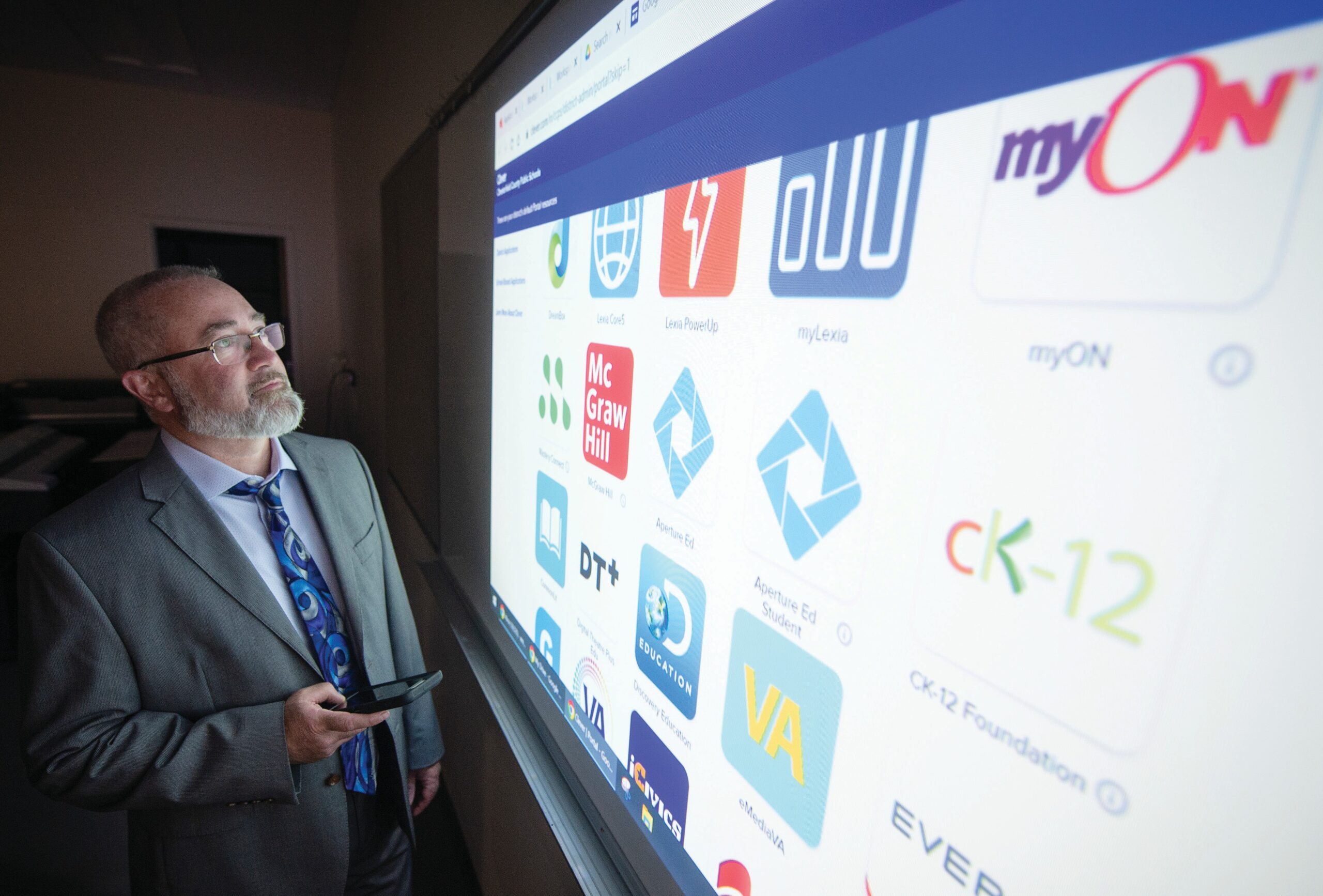 The term “digital native” has been around possibly longer than actual digital natives have been alive – we’re talking about people who have almost no life experience or memory that doesn’t include computers or internet-based technology. The current population of U.S. school kids, Generation Z, are considered the first true digital natives.

And while computers in general have had a steadily growing presence in U.S. schools since the early 1980s, the last decade has seen intense growth in how districts like Chesterfield County Public Schools integrate computer hardware and software into the learning experience.

Ernie Longworth, the director of instructional innovation for CCPS, says the school system has long steered away from textbook-based instruction, where only basic audio-visual aids might supplement lesson plans.

“Some divisions very much use that stuff today,” Longworth says.

But he adds that Chesterfield schools hasn’t adopted a textbook at any kind of scale in about two decades.

“So, we – about a little over 10 years ago – made a deliberate transition from traditional teaching resources to digital content,” Longworth says, “and, quite honestly, we were very much on the forefront of that effort.”

Longworth explains that CCPS took a different path than other school systems when adding technology to its schools. Chesterfield’s process started by equipping teachers with tech applications and tools “before we even got devices [for county school kids] and developed an appetite for them.

“Ten years ago, every other division was running and getting [Apple] iPads and were getting them in the hands of teachers and students. Then they were going: ‘Now what do you want us to do with them?’”

The lack of preparation and training, he says, generated difficult headlines and unwanted attention for school districts for overspending on unproven technology.

CCPS instead had leaned into the concept of “blended learning,” which was “kind of the best of face-to-face instruction with online tools and online instruction.”

He describes a shift in mindset, intentionally departing from the paradigm that most educators had grown up with.

“We went to that place where there was no sole and primary resource [like a textbook],” he continues. “We focused on modular and portable content that was media-rich in most cases.” A video clip, a quote or a literary passage could be one “learning object” that was accessible in different formats – “portable” – and served as a basis for a lesson.

The focus was to allow teachers to be “more like artists” who had the ability to draw from multiple media resources that answer to the variety of students’ learning styles.

In a January interview with the technology website EdTech, Chesterfield schools’ chief technology officer Tim Tillman emphasized the continuing involvement of IT teams as critical to the evolution of school divisions.

He added that education now deals in a constantly changing landscape and that adaptability – recruiting more tech resources to meet students in each moment – is the key.

In practical terms, this means that CCPS has integrated Chromebook laptops throughout its schools – a virtual bookbag, unlike the 20-pound luggage that Gen X-ers ruefully recall. And through those devices, teachers and kids have a smartly curated window on the entire world of knowledge.

For years, Chesterfield has turned its technology toward a trove of lesson materials readily available online – known as open education resources – which CCPS can license to use in classrooms. In 2013, Longworth notes, CCPS was recognized by the U.S. Department of Education as one of six “Go Open” districts in the nation, an effort that the Virginia Department of Education also followed. 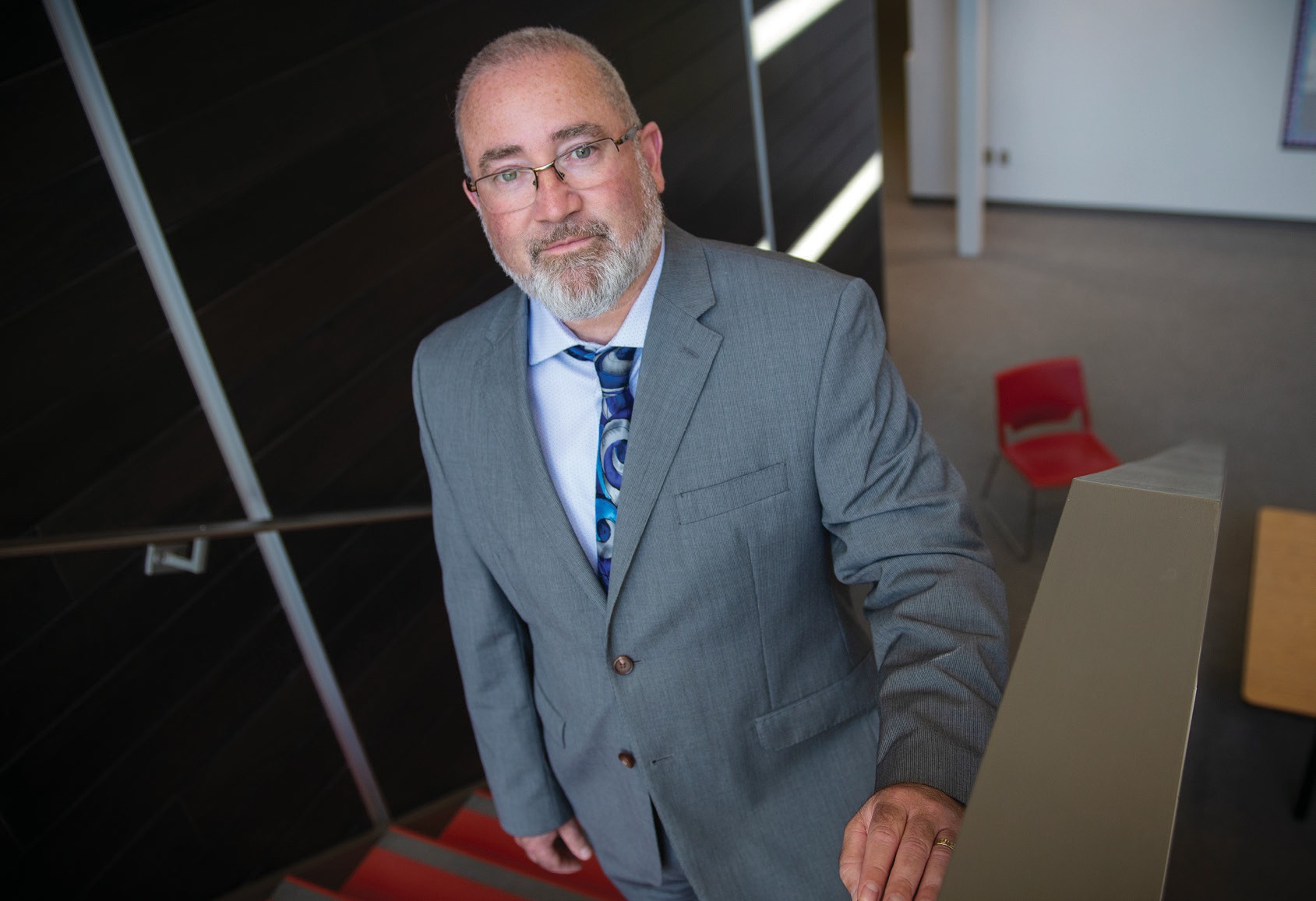 Longworth explains that Chesterfield County Public Schools has been a leader in placing technology in the hands of teachers and students at all grade levels. ASH DANIEL

Longworth explains that CCPS employs a series of stringent reviews to make sure any application or platform that the division buys and implements aligns with its curriculum, its technical requirements (how well things integrate with its computers and networks) and legal needs (how applications fit with other vendor contracts and also protecting data privacy).

The CCPS management of technology, he says, has given specific emphasis on how easily teachers and students can use applications to get right down to the work of teaching and learning.

More important, a student who moves around in the school system – going from one elementary school to another, for example – does not encounter the hassle of having to repopulate data and personal information.

“It’s seamless to teachers, to parents, to the students,” Longworth says.

Beyond early elementary school grades, students also are able to take their Chromebook home, allowing them to follow homework assignments and log their progress on specific lessons.

The foundation of Chesterfield’s instructional technology is a learning-management system called Canvas, which allows districts, schools or teachers to customize a digital ecosystem in alignment with their goals. On top of this, schools or teachers may integrate other applications that match best with students or the subject.

Canvas is used statewide, Longworth explains, and also in the community college system. “It opens opportunities for sharing across districts,” he says, adding, “That’s a recently development, but it’s very, very powerful.”

Skeptics of technology as the end-all, be-all of modern education will point to subjects where hands-on experience of some sort – in chemistry, biology, physics, for example – cannot work as well with a digital substitute.

Longworth is sympathetic to the argument. “In some cases, they’re just better done in person,” he says.

The abrupt changes brought about in 2020 by COVID-19, however, forced educators to supplement lab-style lessons with virtual experiences, Longworth says. “We still had great value on the scientific method, and manipulating a variable and seeing the response and collecting data and that sort of thing.”

So, CCPS turned to a company called Explore Learning that provided interactive, simulated experiences virtually for biology and physics classes.

“Without their hands on the tools, it’s the same concept,” he says. “We want students doing that with their hands, but it can be simulated in a virtual environment.”

Of course, he quips, “I don’t want that to be the only experience my surgeon ever had, but they are pretty high-quality.”

Leading students to actual hands-on trades – which can include everything from accounting to cosmetology to electrical work – is the mission of Chesterfield County schools’ work-based learning program under the direction of Katy Stokes.

By name, the purpose of Stokes’ department is exactly about practicing a task or trade and in person as much as possible.

But the process of directing CCPS students to professions that match their minds now moves through a powerful digital platform that county schools include on kids’ laptops – it’s called Major Clarity.

Stokes describes the platform as student-driven. From the beginning, a child who clicks into Major Clarity begins to answer short questionnaires about themselves.

“It really kind of identifies what their personality style is, what their learning style is, where their interest levels are,” she says. “And it narrows it down based on the assessments that they take on: These are careers that kind of match what you’re saying you’re interested in.”

She explains how kids then can click on the careers through the platform: they can watch a video or an interview of somebody in that job, or try an activity within that platform to see if it’s something that they like.

“They’re able to rate this, and based on that information, it shows them classes in middle school and high school that they can take to align to those career interests,” Stokes says.

What lies ahead for instructional technology is likely a continuation of this trend, Longworth predicts: More personalization of instruction, virtually, to suit students’ different learning styles and to expand the experiences as the lessons respond to the learner.

Corresponding to this, he adds, teachers will gain more flexibility and more resources to shape lessons to more powerful moments of discovery. He sees the emergence of more standardized requirements entering the marketplace for districts like CCPS. And also, there is the merging of kids’ everyday interests and the world of learning – lessons may continue to feature more “game-ification.”

“We want our teachers focusing on teaching, our students focusing on learning and they may never know everything that happens in the background and all the decisions and kind of hard lines that we keep to make sure that happens,” Longworth says. “It’s all about allowing them to focus squarely on their job and not have to worry about the technology in the background.” ¦