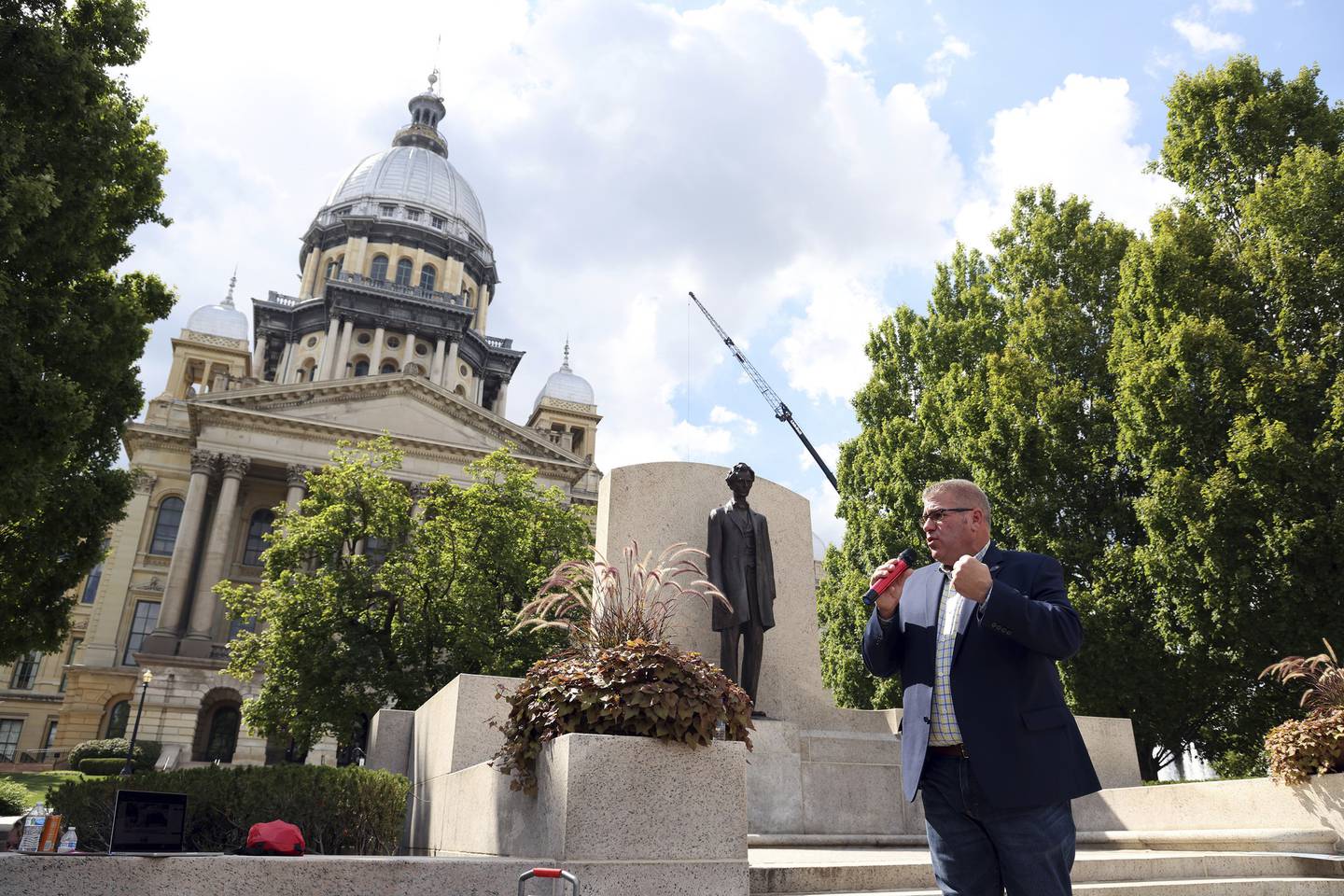 The state fair has long been a celebration of Illinois’ cultural diversity, its 366-acre fairgrounds annually displaying the melding of agriculture and technology, food from various ethnicities and regions, and music ranging from country to rap.

But this year’s edition of the fair, which closes Sunday, featured another example of Illinois’ diversity — the state’s factious politics where anger and tolerance met in the state’s capital amid harsh election-year rhetoric and an ever-widening partisan divide.

On one day last week, Republican governor candidate Darren Bailey of Xenia spoke at an event sponsored by Awake Illinois, an organization rooted in the suburbs and born from the anti-mask, anti-vaccine fervor of the COVID-19 pandemic. The group, which gathered in front of the Abraham Lincoln statue at the statehouse, has in the past year shifted some of its focus to oppose school sex education standards and has used inflammatory rhetoric in opposing LGBTQ+ rights, in particular those involving the transgender community.

A couple miles away at the fairgrounds sat the Mobile Museum of Tolerance, sponsored by the Simon Wiesenthal Center’s Midwest Region. Contained in a bus, the museum offers background and learning experiences about the expanse of civil and human rights amid a culture of growing bullying and intolerance. It gears its efforts to Illinois middle and high school students, government officials and business groups.

Bailey’s visit to the Awake Illinois event gave the mobile museum added traction after the revelation of a 2017 Facebook video from the GOP candidate in which he said the Nazis’ attempted extermination of Jews in the World War II Holocaust paled in comparison to lives lost from abortion. Bailey later said no apology was needed because unnamed Jewish leaders “have told me that I’m right.”

Wiesenthal was a famed Austrian-Jewish survivor of the Holocaust, a Nazi hunter and the inspiration for the center and its activities.

“Over the centuries, since the Holocaust, we have witnessed numerous people, whether they’re in leadership or other positions, who unfortunately talk about the Holocaust and use it as a comparison for other issues,” Pure-Slovin said aboard the mobile museum, which marked its second consecutive visit to the fair.

“Having said that, the Holocaust was distinct, unfortunately, in that (Nazi dictator Adolf) Hitler wanted to annihilate a people for how they prayed, who they were and how they belong. That’s called antisemitism. That’s hatred to the Jews, so it should never be compared to any other situation,” she said.

Discrimination doesn’t just come in the form of antisemitism, Pure-Slovin said. She said the museum is often booked by schools across the state to learn about human rights and combating hate in all forms, including bullying.

“We had a student one time who talked about what it was like to be body shamed on social media. And her teacher didn’t know about it. But then she said something that was even more troubling, and she said, ‘It wasn’t the body shaming that upset me as much as the silence of my friends,’ ” Pure-Slovin recalled. “Unfortunately, in this world today, these are conversations we need to have. People don’t talk about hate or what they’re experiencing.”

But the words “hate,” “anger” and “fear” took on partisan overtones as a regular part of the rhetoric of the fair’s twin political days — Governor’s Day for Democrats on Wednesday and Republican Day on Thursday — which marked an unofficial kickoff for the Nov. 8 general election campaign.

“We the Democratic Party are the ones at the vanguard that are defending democracy,” Kristina Zahorik, chair of the McHenry County Democratic Party and leader of the Illinois Democratic County Chairs’ Association, told hundreds of people at their annual brunch.

U.S. Sen. Dick Durbin, the second-ranking Democrat in the chamber, implored Democrats not to become like Republicans — “a party of anger, fear, hate and violence” — and remain a “party of hope, determination, fairness and respect for the law and constitution.”

A day later, at a meeting of state Republican officials prior to the GOP’s annual rally at the fairgrounds, Republican National Committeeman Richard Porter talked of “anger” among members of the state party which, like other Republican organizations around the country, are heavily influenced by Trump’s continued control over the GOP base.

Instead, Porter used his speech to try to equate the anger being witnessed as actually an expression of love.

Porter said the media had it confused when they “see anger, but they don’t realize it’s actually love of this country … love of liberty, it’s love of freedom.”

Amid the political rhetoric, Pure-Slovin noted the importance of living in “a wonderful country that allows us our democratic freedom.”

“I will fight for the right for anybody to have free speech. Whether I agree or disagree with that free speech is irrelevant, as long as it’s not hate speech,” she said.

“I think the dialogue is so important to try to understand each other and (it’s) so important for all of us to just realize that we’re all part of this world, state of Illinois, however you want to look at it,” she said. “You have to respect each other no matter what your skin color is, no matter how you pray, or not pray, or who you love. It really shouldn’t make a difference. It’s mutual respect.”