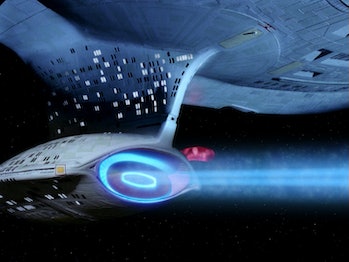 The most important part of a starship in Star Trek canon is the one thing we almost never see in action. Although a big, giant main deflector dish is a central part of the physical design of nearly every single famous Starfleet vessel, actual onscreen depictions of the deflector dish being used for its intended purpose are borderline non-existent. Until now.

In several episodes of various Star Trek series and movies — from The Next Generation to Voyager — we have heard crew members discuss plans to “modify” the main deflector dish in order to accomplish some (often urgent) task. For example, Wesley, Geordi, and Data turn the dish into an anti-Borg weapon in “The Best of Both Worlds, Part 1.” And, in “All Good Things…,” the deflector dish is used as a super-scanner to get a more accurate reading of an anti-time anomaly.

In First Contact, The Borg try to turn the deflector dish of the Enterprise into a communication beacon. And, in Voyager, the deflector dish is modified for all sorts of non-deflecting tasks, such as becoming a dampening field (“Parallax”), a transporter enhancer (“Non Sequitur”), and a graviton- beams-generator (“Scorpion, Part II”). Most of the time when we see people on Star Trek actively doing something with the main deflector dish, it’s generally not what the deflector dish is originally designed for.

So what is the deflector for? The Lower Decks episode “Room For Growth” reminds us of its actual function in the most hilarious way.: When a small cluster of asteroids heads toward the USS Cerritos, Lt. Shax says, “Should I target with all phasers?” But Commander Ransom brushes him off. “What? No. This is what we have a deflector for! Reroute power and let the dish take care of it.”

The fact that Shax wanted to blast the asteroids to bits is perfectly in character because Shax is notoriously trigger-happy. But the meta-commentary here is even better, and much subtler. We’re so familiar with a starship in Trek needing to phaser something at the last minute that it’s actually jarring to see a ship use its components in the ways they’re intended. The joke “this is what we have a deflector for” is awesome specifically because Star Trek never casually shows us the deflector getting used correctly.

As early as the summer of 1964, way back when the original Star Trek was in pre-production, Gene Roddenberry wrote memos about how the Enterprise would need some kind of omnipresent technology to prevent it from constantly getting hit with space debris, especially while traveling at warp. One of his memos is excerpted in the 1968 book The Making of Star Trek, where Roddenberry writes:

Some kind of “meteoroid shield” or “meteoroid force field deflector” will be necessary in true spaceships. If not a force field, it may be a magnetic field which deflects cosmic dust or small meteoroids via an opposite charge. Or it might consist of a probing laser beam which deflects and/or destroys dust and small particles from the path of the ship.

This notion was later incorporated into Matt Jefferies’ design for the USS Enterprise and remained, for five decades, a largely unseen function of Trek’s starship tech. While the NCC-1701 Enterprise did attempt to deflect a large asteroid in the Original Series episode “The Paradise Syndrome,” references to the day-to-day deflection of small space debris via the main deflector dish is something most Star Trek adventures haven’t made time for.

Lower Decks may not be boldly going where Star Trek has never gone before. But, by showing how things work on a starship, all that warping around is suddenly a lot more realistic.

October 5, 2022
New technology could stop drunk drivers from getting behind the wheel 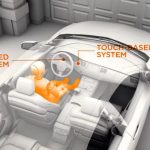 New technology could stop drunk drivers from getting behind the wheel