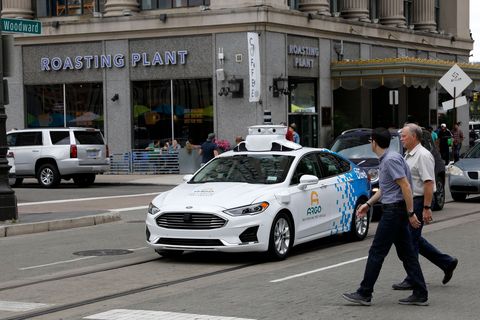 In the past few decades, we’ve gone from very basic adaptive cruise control systems to Level 3 autonomous driving. The latter will essentially drive the car for you without needing any input from behind the wheel. This level of assistance hasn’t yet hit the roads (at least legally) but remains incredibly exciting. It’s therefore one of the most noteworthy automotive technologies to look out for this year. Tesla is currently—for better or for worse—leading the charge with “full self-driving” (FSD), which remains blockaded by legal red tape. Just last year Elon said that FSD-equipped Teslas will be able to drive themselves with safety levels substantially greater than that of the average person.

Other automakers are hot on Elon’s tail with systems of their own. One of the most notable is General Motors, with its subscription-based Super Cruise and Ultra Cruise technologies. Innovation in this area has been happening at a lightning-fast pace and shows no signs of stopping. However, automakers need to balance the need for innovation with driver safety.

How It Started vs. How It’s Going

Driver aids began in 1948 when Ralph Teetor (the same engineer responsible for the automatic transmission) invented cruise control. The light bulb for such a crazy idea came on after he was riding as a passenger with his lawyer who kept speeding up and slowing down as he talked. Implementing cruise control in the 1960s marked the start of automating the driving process. The first iteration was fairly high-tech for its day: It could calculate wheel speed through the driveshaft and adjust throttle inputs mechanically via an electric motor connected to the throttle pedal.

At present, Tesla is leading the way with an extended trial of its FSD technology through a pool of pre-selected test drivers. FSD will currently take control of the vehicle once the driver has entered a waypoint into the navigation system. The controversy surrounding the technology is that the person behind the wheel needs to be able to intervene as necessary—therefore the term “full self-driving” feels misleading. This issue also presents moral and legal questions of whether these systems should be developed in real-time on public roads.

“Many drivers already rely on driver aids, such as lane-keeping assist, collision braking control, and blind-spot detection which help prevent accidents and correct careless driving,” says Mercedes Lilienthal, an automotive journalist and PR/marketing consultant for automotive companies. While these systems are a quantum leap, both Lilienthal and I agree that the existing technology to ensure the driver remains focused on the road ahead should stay in place. Full autonomy on the freeway sounds great, but driving in the city presents a much bigger challenge with pedestrians and particularly cyclists—whose unpredictability makes them currently the kryptonite of these driverless systems. Avoiding pedestrians and cyclists is especially important to get right, as we obviously need to share the road.

GM is one automotive group that’s making an effort toward doing things differently with its Super Cruise system. Compared to FSD, which the driver can use just about anywhere at their discretion, Super Cruise is only available on highways that have been pre-mapped with cameras and GPS data. This is the safest environment to test these types of systems, as the freeway is comparatively much more predictable and generally free of any pedestrians and cyclists to worry about.

GM’s less aggressive approach to data collection means Super Cruise (SC) will inherently evolve more slowly. However, late last year, GM announced Ultra Cruise (UC), which will allow select premium vehicles to enjoy the benefits of SC outside of the pre-scanned network of highways. UC also has baked-in diagnostics that can identify when the system needs upgrading—automatically recording incidents and sending the data back to GM’s data ecosystem. As a level 2.5 system, it still requires the driver to be alert, but won’t trigger any alerts if the driver takes their hands off the wheel; if it notices anything wrong, it will begin to gradually slow the vehicle and engage the hazard lights.

The 5 Levels of “Autonomous” Driving

To better describe the different levels of autonomous driving aids, the Society of Automotive Engineers (SAE) developed a hierarchy in 2014. Technically the list starts with Level 0, but that simply means no driver assistance of any sort—so we’ve left it out. Keen readers will know that Tesla and GM’s semi-autonomous driving systems sit between levels 2 and 3. However, one company called Waymo is actively trialling Level 4 self-driving with its fleet of Chrysler Pacificas in the Phoenix and San Francisco metropolitan areas. These vehicles are able to navigate public roads without anyone behind the wheel and are therefore operating in a much smaller area. Most automakers plan to roll out Level 3 systems well before 2030.

1 (Driver Assistance): At the low end of the scale, this level refers to systems that can provide steering or braking assistance. A great example is radar cruise control, as it can accelerate and brake but you still have to steer to stay in your lane.

2 (Partial Driving Automation): Level 2 driver aids are very close to Level 1. The distinguishing factor is that they can control acceleration, braking, and steering as long as the driver has their hands on the wheel—or their eyes on the road.

3 (Conditional Driving Automation): Level 3 self-driving is a target that many automakers are looking to implement in 2022. CDA works in largely the same way as Level 2. However, the big difference is that it doesn’t require the driver to actively keep their hands on the wheel or eyes on the road. This level of autonomous driving isn’t legally allowed right now in the United States. The highest level of autonomous driving that you can get right now is between 2 and 3.

4 (High Driving Animation): Things get a little bit more complicated when it comes to Level 4 autonomous driving. Level 4 systems will operate the vehicle much the same as Level 3 but don’t require any human intervention—even with a person in the driver’s seat. According to the SAE, this technology is targeted for use in driverless taxis and public transport; the big challenge is navigating safely through inclement weather along with dodging pedestrians and cyclists.

5 (Full Driving Automation): The fifth and final level of automation is both the simplest to understand and the most complex. These vehicles won’t be beholden to any weather or geofencing rules and can operate with 100 percent autonomy.

Heading Toward a Nervous Future

Many automakers—Tesla included—are hinting at full self-driving being done and dusted in the next couple of years. It’s in automakers’ best interests to be the first to establish a self-driving system that actually works. However, while these complex technologies are rapidly advancing, things still aren’t going to happen overnight.

It’s no surprise that Tesla’s initial innovations happened at a blistering pace. But, myriad incidents called the brand’s rather “creative” marketing speak into question, prompting the National Highway Traffic Safety Administration (NHTSA) to begin investigating the company for deceptive marketing practices in August 2021. Going forward, these semi-autonomous systems are incredibly exciting. However, we need to balance innovation with safety.

Matt Crisara
Matt Crisara is a native Texan who has an unbridled passion for cars and motorsports, both foreign and domestic, and as the Autos Editor for Popular Mechanics, he writes the majority of automotive coverage across digital and print.