Over the past several seasons, the NFL has become more and more of a passing league. Increasingly, the most dependable way to be a good team is to have the best pass offense possible. That will likely become even more true as the years go by and teams lean more and more into the data that tells them passing is king.

Obviously, quarterbacks are the greatest driver of passing success. You can make an argument that any number of other factors come next, whether it’s the offensive coordinator putting the players in position to succeed, the offensive line making sure the quarterback has enough time to throw, or the pass-catchers who are tasked with finding creases in the opposing defense. Today, we’re here to talk about that last group, as we rank the eight NFL divisions by their wide receiver talent.

There was a lot of turnover in this division, with the Titans trading A.J. Brown and cutting Julio Jones while trading for Woods and drafting Burks, the Jaguars splashing the pot in free agency for Kirk, the Colts drafting Pierce, and the Texans drafting Metchie. The departures outweigh the additions, and the AFC South remains the division with the weakest crop of receivers in the league.

Last year, we had the NFC North much higher on the list, largely on the strength of the top group of wideouts. But Davante Adams is no longer in the division. Neither is Allen Robinson. Thielen took a (slight) step backward last year. Jefferson is the only outright star left, and while the depth of talent in this division is better than it was last year thanks to players like Mooney, St. Brown, and Osborn showing flashes last year, it’s still not on par with the next group of divisions, let alone the best of the best.

If we could be more confident in the health of some of these players, the NFC South might rank a bit higher. But Thomas has barely played over the past two seasons. Godwin is coming off a late-season torn ACL. Landry missed a career-high five games last season. With Calvin Ridley out for (at least) the season, there’s just not enough star talent left over to push this group ahead of the next several divisions — even with stars like Evans and Moore remaining, and potential stars like London and Olave being added through the draft.

I think we might look back and regret having the AFC East this low. There are two outright superstars here in Diggs and Hill, albeit with one of them entering a vastly different team context than he’s had in the past. There are (at least) two more potential stars with Davis and Waddle. There are excellent support players like Crowder, McKenzie, Wilson, Davis, and Berrios. Plus, there’s Moore and Wilson waiting to pop in New York, if Zach Wilson can get it together in Year 2. The Patriots having a group of “OK that’s fine” receivers is the only thing holding this group back.

The AFC East probably has two receivers who are currently better than anyone in this division. But the NFC East likely has the next four best players, and has greater depth of surefire-starter-quality wideouts — at least once Gallup returns from his late-season torn ACL. Lamb is more than ready to assume the No. 1 role in Dallas. Brown and Smith should form one of the NFL’s best 1-2 punches in due time. McLaurin is already an outright star, just waiting, desperately, for a quarterback worthy of his immense talents. Toney looked like a star when given the opportunity last year, but couldn’t stay healthy. Gallup has a 1,000-yard season under his belt and is one of the best sideline ball-winners in the league. There’s a lot here, just not quite as much as there is in the next few groups of players.

It was an incredibly tough call between these next two divisions, but the volume of established stars of the NFC West ultimately won the day. Still, there is an absolute ton of firepower in the AFC North, including a player who has the potential to be the best wideout in the league at some point in the next few years in Chase. Higgins might already be the NFL’s most overqualified No. 2 receiver, Boyd is one of its best No. 3 wideouts, the Steelers have two players who have already broken out in Johnson and Claypool, the Browns brought in Cooper via (an incredibly low-cost) trade, and there’s a lot of potential in players like Bateman, Bell, Pickens, and Austin.

Hot damn there is a ton of talent in this division. Kupp was the best wide receiver in football last year, and his connection with Matthew Stafford should remain strong. Samuel might be the most uniquely talented offensive skill position player in the league. Metcalf and Lockett are each stars in their own right. It wasn’t that long ago that Robinson was one as well. Hopkins will miss the beginning of the season, but the Cardinals still have a solid trio behind him. Once Aiyuk got past the weird pseudo-benching early in last season, he began to live up to the promise we saw from him during his rookie year. In any other season, this group might rank No. 1. However …

Sure, the AFC West lost Tyreek Hill. But it added Adams, Smith-Schuster, Valdes-Scantling, and Moore, while retaining the Allen-Williams duo, Renfrow, and a Broncos wide receiver trio that is only beginning to scratch the surface of its potential and should reach a new level with Russell Wilson in town. We have been talking all offseason about the various reasons the AFC West should be the best, most exciting division in football, and its wide receivers are among the many reasons that’s the case. 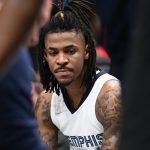