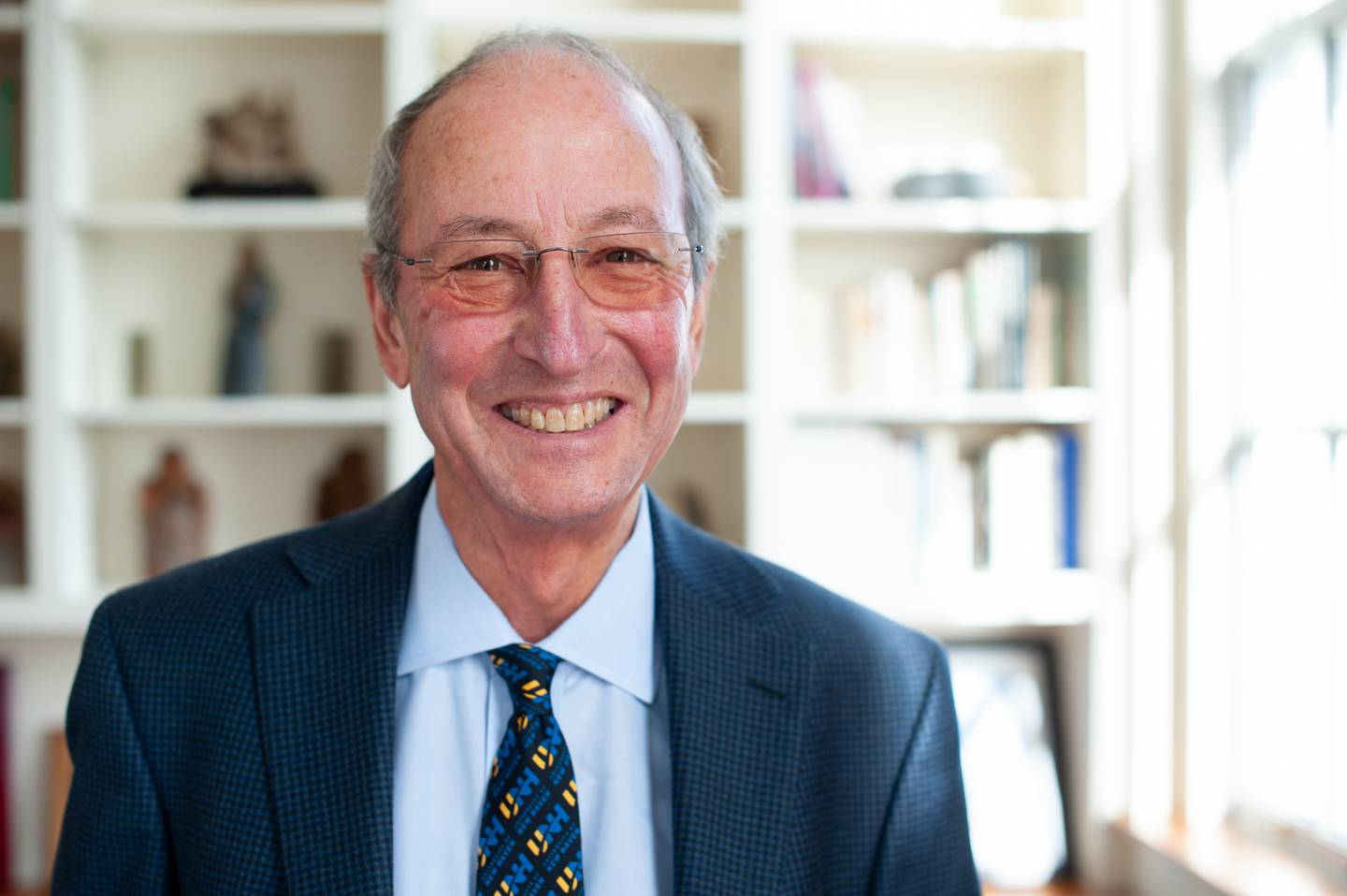 When Steven Kaplan took the helm of the University of New Haven in 2004, the school was in such poor shape that the chairman of the Board of Governors told him, “I have good news for you. Nobody ever fell off of a floor,” Kaplan said.

Eighteen years later, as Kaplan prepares for retirement, UNH is a whole new university with an endowment of “well over $100 million” compared to “less than $10 million” in 2004, Charles Pompea, chair of the Board of Governors, said.

“Steve has just done a magnificent job,” said Pompea. “If it wasn’t for Steve Kaplan, [the] University of New Haven might not be in existence today.”

[ The president of a Connecticut university is stepping down early; ‘university politics’ play a role, letter says ]

According to information provided by UNH, in 2004 there were 2,000 full-time undergraduates compared to today’s approximately 4,800, and the six-year graduation rate was 44% to today’s 66%.

There were about 20 buildings on campus back then. Today there are 80.

Kaplan was recently appointed chancellor and chief executive officer of the school after stepping down from the presidency to lessen his day-to-day duties. The original plan was for Kaplan to maintain oversight for two years while an interim president served and a nationwide search was launched for a permanent replacement. Now, amid faculty “politics,” which Kaplan downplays, he has decided to leave the new position at the end of the 2023 school year to enjoy more retirement time sooner.

Although the change in schedule came amid the “politics,” it was a change in time frame Kaplan had been desiring, he said. After stepping down as chancellor and CEO, Kaplan will serve a two-year, working sabbatical, continuing to raise funds.

“I will always be accessible to whoever succeeds me, but I also want to be out of that person’s way from the day she or he takes office,” he said.

Pompea said Kaplan started raising the issue of a separation with the board two years ago, but they convinced him to stay.

“We hate to see him go, but it’s time for him to enjoy life,” Pompea said, noting it’s a perfect scenario to have Kaplan enjoy retirement while being on a working sabbatical to keep success going at UNH.

Kaplan, who answered The Courant’s questions by email while traveling through the Arctic Circle, is quick to outline his retirement plans.

“To have far more time to play with my four grandchildren; to spend more time with my wife and family at our home in the South of France; to write a novel; and to travel like crazy.”

The “political” issue among campus faculty was disclosed recently in a letter from Pompea to the university community.

Pompea wrote in that letter, “It was communicated to Steve that some faculty were pushing for him to leave the Chancellor’s post before 2024. The climate created by this inappropriate interference in the management and oversight of the chief executive strengthens the Board in its conviction that it should remain committed to the two-year timeframe for conducting a presidential search.”

There wasn’t a lot of official detail on dissatisfaction from the faculty, but Kaplan has since dismissed it to a vocal few.

“Within any organization, there are always people who are positioning themselves for influence and power,” Kaplan wrote in an email.

He said at every university there are three major groups of faculty, including those who are “so caught up in supporting their students and doing their own research that they generally cannot find the time to get caught up” in politics; those who provide service to the university but do so collegially and positively; and “the small but very vocal and often dominating minority who see it as their role to oppose the administration as often as possible.”

Kaplan wrote that the latter group generally considers it a “badge of honor to mistrust and indeed at times attack the administration.”

“We faculty members read with interest Steven H. Kaplan’s announcement that he will leave the university at the end of this academic year and we wish him all the best in the next chapter of his life,” she said. “The faculty at [the] University of New Haven has been unfailingly professional in its approach to our students and to university-shared governance. We are devoted to the highest quality education for our students and the continued success of the university.”

Kaplan said he decided to move his retirement along because was enjoying semi-retirement.

Pompea said UNH was lucky because Kaplan has so many great ideas, a love of the community and close relationships with donors.

“He never stops. … He’s got the patience of a saint,” Pompea said. “We can’t be more pleased with where the direction of the university is going.”

As for the faculty issues, Pompea said there is always someone who disagrees with someone.

Kaplan, who has been characterized as a “dictator” by some staff, calls himself a “benevolent dictator.”

“I am, but I have also gotten pretty good results,” he said.

UNH Chief Financial Officer George Synodi, who was hired in 2002, said that when he arrived at UNH, the financial challenges were so “insurmountable” that he wondered if he had made the wrong decision in taking the job.

He referred to UNH as a “terribly underperforming asset” at the time.

“I can tell you that back in 2002 when I started at UNH, the primary credit concern for our university was whether we would be in existence five years later in 2007,” Synodi said.

But under Kaplan it all turned around, he said.

Synodi said the university’s credit standing as analyzed by the key agencies has been ranked higher specifically because they recognize the strong financial management by Kaplan.

“I became bullish on UNH after President Kaplan arrived in 2004, and I remain so today,” he said. “I can share today that coming to UNH turned out to be the best professional decision I could have ever made in my career. The turnaround is astounding.”

Asked how the university landscape has changed since he took office, Kaplan said they have gone from an “amenities war ” — everyone racing to build the best rec center, climbing wall, residence halls, etc. — to a “discounting and scholarship war because of demographics and demand.”

“This war is proving to be far more costly and will likely bring down many tuition-driven institutions,” Kaplan said. “UNH is tuition-driven but strong enough by all measures to weather this most recent storm, which will likely last until the demographics improve later in this decade.”

Kaplan said the biggest accomplishments of his tenure include hiring almost 90% of the faculty and a large portion of the staff during the last 18 years.

“They are for the most part an exceptionally talented group who have transformed the outcomes of our very talented student body,” Kaplan said. “Our rankings, our fundraising, and our reputation have all been significantly enhanced by this. I am also really proud of our campus in Tuscany, our Science and Engineering Magnet School, and the Orange Campus for our Pompea College of Business, all of which would not exist if I had not been at UNH.”

As for trends taking shape in higher education, Kaplan said, “I keep telling the faculty that there is some Amazon, Uber, Airbnb-like entities out there preparing to dominate the higher education landscape.

“I don’t know what this will look like or where it will come from, but it is coming. I am trying to prepare us for this by building partnerships around the globe with successful for-profit higher ed. organizations. There is much work to be done here.”

Kaplan said in the coming year it is among his goals to complete the strategic partnerships and initiatives that he has undertaken to lessen the university’s dependence on undergraduate tuition revenue.

Five Things You Need To Know

“By the end of this year, we will be on a path to having far more of our income stem from graduate and online programs,” he said.

So what does Kaplan hope his legacy will be?

“That all of my efforts as President will be seen as having had one common goal: to enrich the educational experience and thus the lives of all of our students.”