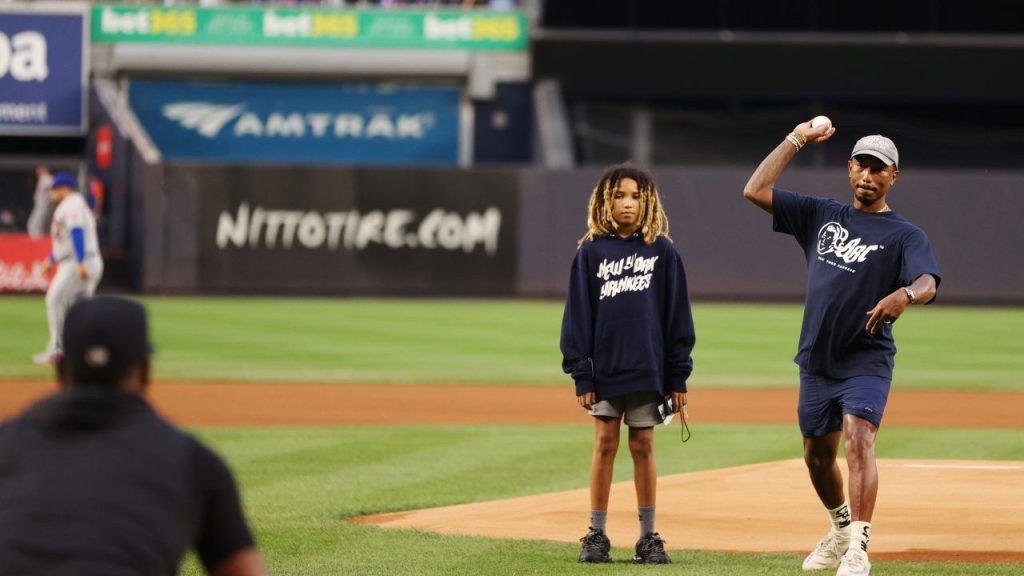 If you allow yourself to be present, the galvanizing energy in Yankee Stadium is palpable. An evening breeze cuts through the sticky smog-like weather hugging the venue as baseball fans grab their seats for a night of celebration. Of course, the festivity is about the New York Yankees facing the New York Mets in their storied Subway Series exhibition. But what’s also being celebrated is the release of Pharrell Williams’ new Billionaire Boys Club (BBC) collaboration with the Yankees.

To commemorate the fashion partnership, Pharrell and his son Rocket took centerfield to throw the first pitch on Monday night (Aug. 22). The Grammy Award-winning artist—dressed in a classic, navy blue BBC logo tee from the new capsule collection—tossed the ball to the Yankees pitcher, Luis Severino, as Pharrell’s biggest hits like “Beautiful” and “Get Lucky” blared from the speakers and into the Bronx air.

Meanwhile, Rocket—wearing a BBC x Yankees hoodie and his father’s Humanrace branded kicks—gave a mighty throw that landed square in backstop Kyle Higashioka’s mitt. Little to no adjustments were made for his pitch, prompting a proud dad moment from the often private musician overjoyed by the present.

What many attendees and viewers may not have realized is that Williams’ latest collaboration—which was available for purchase in the venue’s Team Stores—is predicated on his love for New York City and actually has been in the works for quite some time.

“So, George [Steinbrenner] contacted us and, honestly, the idea between these two cultures coming together came almost two-and-a-half years ago,” Pharrell told VIBE after throwing the ceremonial first pitch. “To finally have this wild idea come into fruition is — I’m grateful.”

But true Pharrell fans know him to be not only an innovator in music, but also one honed in on the betterment of culture. Whether it be inclusive skincare with his new Suncare line or his non-profit YELLOW delivering educational and empowering tools to marginalized students, Williams’ focal point has always been “the culture for the better.” But his Billionaire Boys Club streetwear brand is where that journey began in 2003 with co-founder Nigo.

But the two entities didn’t join forces with the idea of a one-and-done deal; it’s a brand collaboration that Pharrell hopes to continue well after 2022. Williams detailed the importance of continuing the relationship and expressed that teaming with the “Evil Empire” is a way “to push and honor culture” and give a nod to BBC’s connection to Japan.

“I was excited to get started [working with the Yankees] because of all that we could do together for our culture. BBC has a rich history with Japan, working with Nigo in those early days and now. [That] relationship mimicked baseball in a way, which has a strong culture in America and Japan.”

As a relaxed Pharrell headed off the field, he made sure to point out that although both brands have a historic tie to New York City’s culture, the best is yet to come.

“[Jay-Z] said he made the hat more famous than a Yankee can,” he said with a smile, referencing the lyrics of Hov’s “Empire State of Mind.” “So there is more we have in store for Billionaire Boys Club, BBC, and the world-famous Yankees. But we have to take it one vision at a time, and then everything else. You’ll see.”