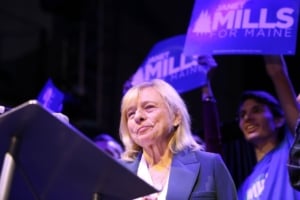 As concession speeches went partially made and unmade throughout the nation last Tuesday night, the focus shifted to the races’ winners who, in many cases, found themselves doing the work of two.

In Lewiston, Paul LePage delivered a narrow and petulant address to an audibly angry audience. It was as if the former governor had set out to do some name calling in private with those assembled.

Gov. Mills, meanwhile, gave a speech that sounded as if she had some expectation it might be broadcast. Despite high spirits in Portland, Mills managed to be conciliatory and called for unity.

There was one less choreographed moment, however, just before she began speaking. To rapturous applause, the governor threw up a hand and cried: “We’re not going back!”

Wittingly or unwittingly, Mills then and there acknowledged the primary sentiment that has taken hold in the U.S. and around the world in the past 10 or 15 years: a desire to go back in time.

Breakneck social, technological, cultural, economic and environmental change has left a cohort of people glancing over their shoulders in the hope that the past hasn’t disappeared from view entirely. Faced with such upheaval and its attendant discomfort, the instinct often isn’t to find a way through or out of it — it’s to throw the car into reverse.

We’ve seen it in Britain, which voted by referendum to “take back control” and upend the relative harmony and cohesion enjoyed for years as part of the eurozone. We’ve seen it in the rise of disgruntled, righteous populism all around that zone and beyond.

And, since at least 2015, we’ve seen it in abundance here in the U.S. Recall that supporters of Donald Trump don’t want America to be an original kind of great, nor a “great” appropriate for the demands of the present day. They want it to be great again – great like it was once upon a time. This pitch, and all the others like it, is always plaintive, never productive.

So firmly clutched has been this relentless narrative of “undo” and “rewind” that in 2020, when Trump was running to extend his presidential term having already served four years, flags and signs that read “TRUMP 2020: STOP THE BULLS–T” were commonplace. Whose, exactly?

The past was not as uniformly simple or sun-dappled as the MAGA wing would have us believe. You don’t want the clock turned back if you’re a person of color. You’re probably not buying the concept if you’re an immigrant, if you’re a member of the LGBTQ community, if you’re a person with a disability, a woman, or somebody born after 1997.

Maine’s own “Donald Trump before Trump became popular” (to go further back again) exhibited some understanding of these ever-crystallizing realities this past election cycle.

LePage was very careful to maintain distance from the 45th president. Subdued was the profanity, obscenity and racism that peppers the former governor’s record. Instead, we were promised a more moderate version of the guy we used to know.

Even then, when it came to the opioid crisis and more, “LePage 2.0” was flippant about details that matter. He fought with the Sportsman’s Alliance of Maine when he didn’t have to. He threatened to “deck” somebody videoing him.

In the end, whether it was temperate enough or not, Maine voters didn’t follow along.

The same pattern was on evidence around the country. Headlines last week either cheered or bemoaned the “red trickle” and trumpeted Republican despair. People rounded on Trump as the culprit.

Although it’s too soon to sound any kind of death knell, the bombast and rage of Trumpism may finally be falling out of fashion.

These times aren’t straightforward. The challenges facing Maine and the wider world are, to put it lightly, immense. This is no reason to shirk the responsibility to rise to those challenges. They need to be taken on, not trashed; dealt with rather than dismissed. We need questions answered by the people seeking to govern. We need more studious and greater policymaking. We need more investment in the public good rather than less. A return to the past is not on offer and nobody gets to be in retreat.

Secure in that knowledge, Mainers opted to forge ahead.

Please check your email to confirm and complete your registration.

Use the form below to reset your password. When you’ve submitted your account email, we will send an email with a reset code.

View from Away: DeSantis has become a bigger threat to Trump — and not just because he won Florida