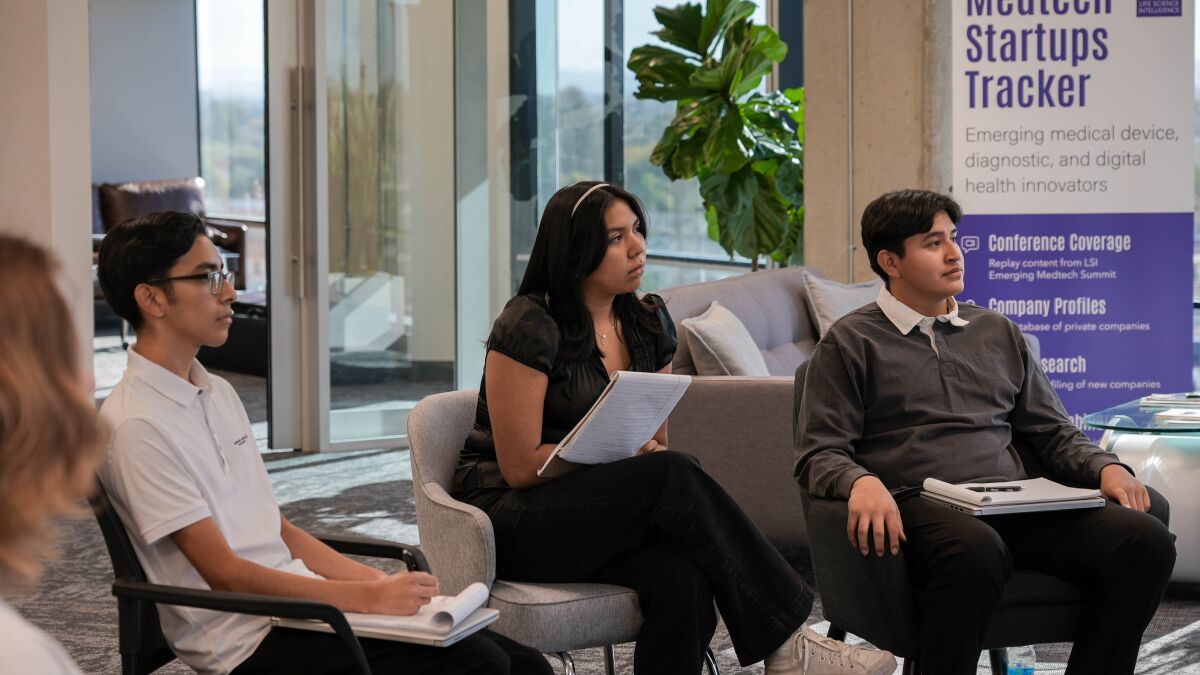 Edy Gancherov said she likes to be involved in “a little bit of everything” at Ocean View High School.

The junior is a student athletic trainer, president of the Mental Health Awareness club and on the Business Academy executive board. She also plays softball and is a thrower in track and field.

When Gancherov heard about an opportunity to gain some real-world business experience, she knew she couldn’t pass it up. Even if it meant giving up hours on Saturday for six weeks straight, a tough tradeoff for any teenager.

“I’m usually up early on Saturdays anyway, and other than weightlifting, I don’t have much,” she said. “It’s been honestly so much fun.”

Scott Pantel is the founder and chief executive of Life Science Intelligence, a Huntington Beach-based, medical device-focused market research and events company. He said he’s always enjoyed coaching and mentoring youth, having done so in the past through youth baseball.

“About a year ago, I thought we ought to do something with the local high schools,” Pantel said. “Let’s create a program where young entrepreneurs have an outlet to be able to learn about business. Let’s give back.”

Pantel said the plan was originally to only pick four OVHS Business Academy interns. But each of the eight — four juniors and four seniors — were so impressive during initial interviews that they were all chosen.

“My thinking was that we would lose a couple along the way … and all eight of them have made it to the end,” Pantel said. “It was awesome.”

They’ve all gone through the six-week program and learned skills in topics such as sales and marketing, communications and accounting and finance, with experts from those fields and others brought in to mentor the students.

The program concludes Saturday morning, when each student will pitch an imaginary company they’ve been asked to construct in the medical device field. The presentation is modeled on an event that LSI hosts in Dana Point each March, Pantel said, where real companies pitch to investors.

Upon completion of the program, each Ocean View student will receive a laptop and certificate. One will be selected for a $2,000 educational scholarship and paid internship.

Gancherov will be pitching a device that offers treatment plans for neurological movement disorders. Evyn Lewis, an Ocean View senior headed to Lewis & Clark College in Oregon for baseball, said his pitch looks at a noninvasive laser removal process.

The topic hits close to home for Lewis, who said his mother and girlfriend have both had serious surgeries that left significant scar tissue. He said he has thoroughly enjoyed the LSI Entrepreneur Business Academy itself, as he’s always wanted to work for himself and enjoy that independence.

“Entrepreneurship has been something I’ve tried to follow any chance I can get, so when this came about, it was perfect for me,” Lewis said. “They’re very good about teaching stuff in a way that high school students will understand. They were very approachable, not intimidating at all. It was a great environment for us to experience, and to learn in.”

Pantel said the program has also been rewarding for LSI and its staff. He plans to continue it in future years, perhaps opening it up to other high schools as well.

“Despite what you hear out there, what I see from high school kids is that they want to work hard, they want to learn and they have a huge appetite for mentorship,” he said. “They have an appetite to learn, and they need a place to go do that. If LSI can help in some small way to support our local community and the medical device industry as a whole, then we’re going to keep doing this for many years.”

Support our coverage by becoming a digital subscriber.