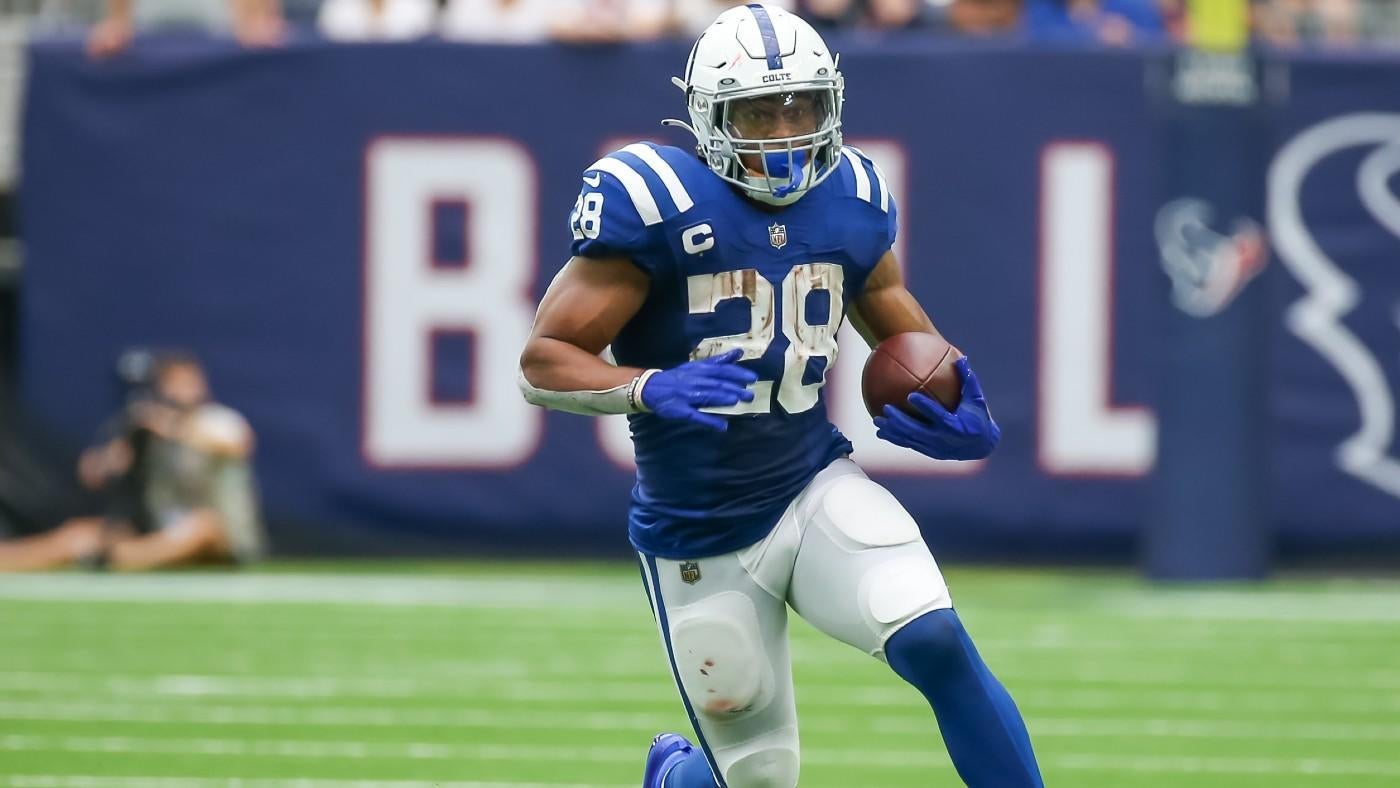 Week 9 in the NFL got underway on Thursday night with the Eagles remaining perfect on the season, moving to 8-0 for the first time in franchise history with a win against the Texans in Houston. Now, we have the rest of the Week 9 slate on the horizon and there are some interesting matchups to sink our teeth into, including three divisional games and a head-to-head between the previous two Super Bowl champions.

Of course, with a new week of games comes a new collection of injuries that we need to follow. With teams finishing up the week of practice, they’ve released their final injury reports and rolled out game statuses for Week 9. Below, you’ll be able to find each of those reports and a breakdown of some of the biggest injuries.

All NFL odds via Caesars Sportsbook.

Justin Herbert will have to operate without his top two wideouts on Sunday, as Allen and Williams are out due to hamstring and ankle injuries, respectively. Carter is also questionable to play, as he came down with an illness this week. Josh Palmer is definitely someone you should consider starting in fantasy and/or DFS. The Chargers won’t even have their kicker this Sunday, as Hopkins is out due to a hamstring issue. It will be Dicker the Kicker (Cameron Dicker) who handles those duties on Sunday.

The Falcons will not have their star cornerback Terrell for the second straight week, as he is still working through that hamstring injury. Wilkinson is out after not practicing all week, and then Harris is questionable due to an ankle issue. He was limited in Friday’s practice session.

Cracraft was the only Dolphin ruled out on Friday. Jackson was activated off of injured reserve this week, and he was a limited participant in practice on Friday. Still, he’s listed as doubtful to play. All four players that were listed as questionable in Armstead, Conner, Rowe and Phillips were at least limited participants on Friday. Rowe was a full participant, which is a good sign for his availability, but Phillips was added to the report on Friday for the first time with a quad injury. He was limited.

Chicago saw Carter pop up on the injury report on Friday and he did not participate in practice as he is dealing with an illness. Other than him, the entire club is healthy as Eddie Jackson and Teven Jenkins were among the players who practiced fully on Friday and carry no designation. Right tackle Larry Borom (concussion) also practiced fully and is good to go for Sunday. Chicago also is activating left guard Cody Whitehair (MCL) off injured reserve and he could be in line to start.

Hubbard was downgraded to a non-participant in Friday’s practice and has since been ruled out for Sunday’s matchup with the Bengals. That means it’ll be another showcase for D’Onta Foreman, who rushed for 118 yards last week. Jackson and Barno were both listed as questionable but did practice on Friday, which is encouraging for their status.

Cincinnati will be thin at cornerback on Sunday after ruling out Hilton after he was unable to practice this week due to a finger injury. The Bengals will also be without fellow corner Awuzie and have listed Flowers as questionable.

The Packers won’t have their leader at linebacker on Sunday, as Campbell suffered a knee injury in the loss to Buffalo on Sunday night and did not practice all week. Aaron Rodgers has some banged-up linemen, as both Bakhtiari and Jenkins are questionable to play. However, both players were limited participants in practice on Friday. The wide receiving corps may again be shorthanded, as Lazard and Watson are both questionable to play. Lazard was limited all week, while Watson was limited on Thursday and Friday.

Swift was able to practice on a limited basis both Thursday and Friday. This comes after Swift was able to make his return to action last week against Miami after sitting out since Week 3 due to injury. He played 55% of the snaps last week.

Taylor has officially been ruled out after being unable to practice all week due to an ankle injury. This means that Deon Jackson is in line to start and should see an even heavier workload after Indianapolis traded away Nyheim Hines earlier in the week. The Colts also have Zack Moss, whom they acquired in that deal with Buffalo.

Mac Jones won’t have his center again this week, as Andrews is still dealing with the concussion he suffered vs. Chicago. Jones won’t have one of his top receivers either, as Parker will be inactive with a knee injury. He did not practice all week. There’s a bit of an illness going around, and it’s affected two important players on the Patriots. Both the running back Harris, and the cornerback Jones are questionable to play due to sickness. Harris was limited on Friday, while Jones sat out. There’s some concern on the defensive side of the ball as well, as Barmore, Dugger, Uche and Wise are all questionable to play. However, all four players practiced all week as limited participants.

Buffalo will be without safety Jordan Poyer after he injured his elbow last Sunday against the Packers. Poyer didn’t practice all week, so it’s not particularly surprising to see him ultimately be ruled out. Meanwhile, Von Miller, who missed the first two days of practice with what the team noted as an ankle injury along with rest, was a full participant on Friday and carries no injury designation.

Corey Davis was sidelined all week with a knee injury that he initially suffered in Week 7. He’s been put on the shelf since. New York has its bye in Week 10, so the hope would be that he can return after that. Everyone else on the Jets roster is healthy and ready to play in Week 9.

Tomlinson will miss his first game of the season as the Vikings defensive lineman is dealing with a calf injury. Head coach Kevin O’Connell said that Khyiris Tonga will see an uptick in work with Tomlinson sidelined.

Washington will again be without rookie Jahan Dotson, who has been sidelined since tweaking his hamstring injury before the Commanders matchup against Green Bay in Week 7. On a more positive note, tight end Logan Thomas was a full participant on Friday and carries no designation after being limited both Wednesday and Thursday with a calf injury. Ron Rivera also told reporters that Chase Young — who was designated to return to practice this week — will not play against Minnesota, albeit after putting together a good week of work.

Darren Waller has missed the last two games due to a hamstring injury and was a limited participant all week in practice, which has him officially listed as questionable for this matchup in Jacksonville. Head coach Josh McDaniels said Waller is “working extremely hard to try to get back as soon as he can.” Meanwhile, after being limited on Wednesday due to an illness, wideout Davante Adams was a full participant on both Thursday and Friday and carries no designation for this game.

Jacksonville is very healthy coming into this matchup as they listed just Jamal Agnew on the final injury report. He was limited throughout the week due to a knee injury and is officially listed as questionable.

Geno Smith won’t have the speedy Goodwin at his disposal this week, as he was ruled out with a groin injury. The same goes for pass rusher Taylor. Both players did not practice at all this week. Hart was limited all week with a hamstring injury, and then Blount sat out practice on Friday with a quadricep injury. Both players are listed as questionable to play.

Arizona ruled out Garcia, Hudson and Matthew on Friday. All three did not practice all week. Star safety Baker is questionable to play after missing practice on Wednesday and Thursday. However, he did return in a limited capacity Friday. In fact, all five players listed as questionable for the Cardinals practiced as limited participants on Friday.

Allen and Jefferson are questionable to play Sunday, but both players were limited participants in each of the last two practice sessions. The Rams’ injury report brings good news, as star wideout Cooper Kupp does not carry a game designation into the weekend. He’s been dealing with an ankle injury, but finally returned to full participant status on Friday. Running back Cam Akers may play this week after working through his issues with the team.

Gage and Goedeke were ruled out after not practicing all week. As for Brate, he was a limited participant all week, but isn’t healthy enough to go. Winfield is still working back from his concussion. Although he was limited on Thursday and Friday, he will not play. Hicks may return this week despite his foot injury. He was a full participant in practice on Wednesday and Thursday, but sat out Friday. He’s questionable to play. As for Davis and Murphy-Bunting, while they are questionable to play, both were full participants in practice on Friday.

Tannehill was able to practice in limited fashion on Friday but head coach Mike Vrabel noted that the quarterback will be a game-time decision. Tannehill suffered an ankle injury in Week 7 and missed Tennessee’s 17-10 win over the Texans. If he cannot go, that would thrust rookie Malik Willis into his second career start. Derrick Henry, who was held out of Thursday’s practice, was back as a full participant on Friday and carries no designation.

Kansas City is remarkably healthy heading into Sunday night’s showdown with Tennessee. Jody Fortson is the lone player listed on the final injury report as every other player was able to practice fully.

Ravens star tight end Mark Andrews missed practice for the second straight day due to knee and shoulder injuries. Running back Gus Edwards also did not practice again due to his hamstring injury. Cornerback Marcus Peters sat out of practice after being a limited participant on Thursday due to quad and knee injuries. Wide receiver Demarcus Robinson was a new addition to the injury report, as he was limited Friday with a groin injury after being a full participant on Thursday.