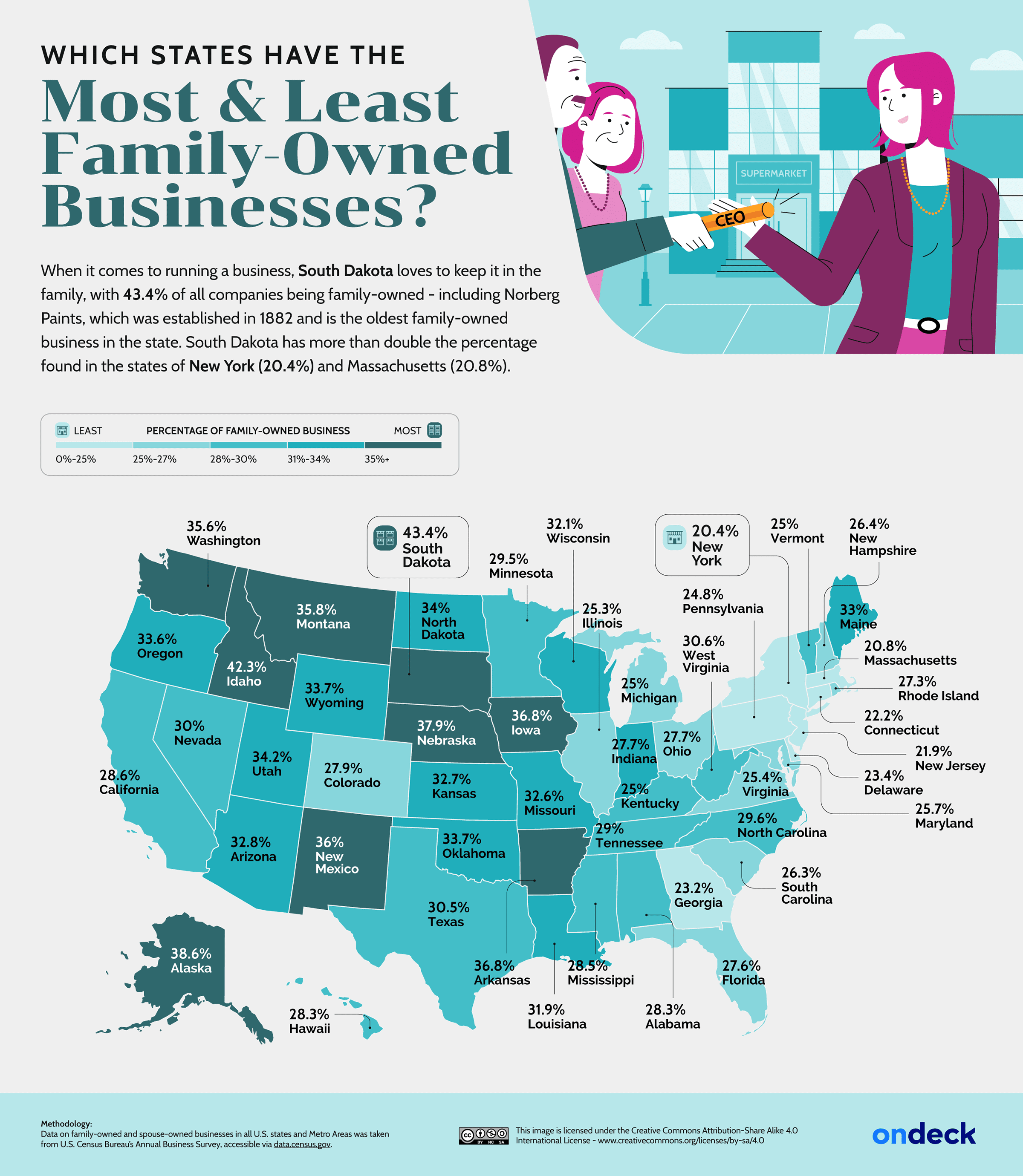 A new study analyzing data from the U.S. Census Bureau’s Annual Business Survey has identified the states and metros with the highest proportion of family-run companies.

What State Has the Most Family-Owned Businesses?

The study was conducted by OnDeck with the analyzed data including spouse-run businesses too. They discovered the state with the highest share of family-owned businesses is South Dakota, with 43% run by families or spouses.

New York is the state with the lowest share of family businesses at just 20.4%, although New Jersey, Massachusetts and Connecticut ran New York pretty close.

Reporting their findings on the OnDeck website, the analysts said: “The family company is an ancient business structure that has regained its footing in the digital age. Online stores and services run from the kitchen table power a cottage industry of low-overhead family companies. Their geographical market is limited only by long-distance shipping costs. The work is as satisfying as it is challenging.

“And mom-and-pop firms deliver the authenticity and personal touch that established giants have tried so desperately to replicate over the past two decades. During the pandemic, their true colors were revealed. While big corporations profited from deep-set structural imbalances, family businesses were nimble and inventive. A report from KPMG revealed that family firms were 42% more likely to implement a business transformation strategy than non-family firms. These companies supported and were supported by their communities, both online and local.

“But just where are those localities? OnDeck wanted to draw attention to the communities where family businesses are making the greatest impact.”

OnDeck also say that on average, a little over 30% of U.S. businesses are family-owned, though that percentage goes up significantly in 14 states. Two states can boast that more than two-fifths of businesses are family-run, with the aforementioned South Dakota joined by Idaho who scored 42.3%. OnDeck add that South Dakota seems to have scored so well because it is a traditionally agricultural state with around 98% of its farms being owned and operated by a family.

A lot of smaller family-run businesses also become well-practiced in overcoming adversity. This goes for the struggles brought about by the economic downturn of the pandemic, or the imbalance of generational wealth faced by BIPOC businesses.

As OnDeck say, “Despite what Succession and the Godfather movies have taught us, the family that works together, thrives together.”