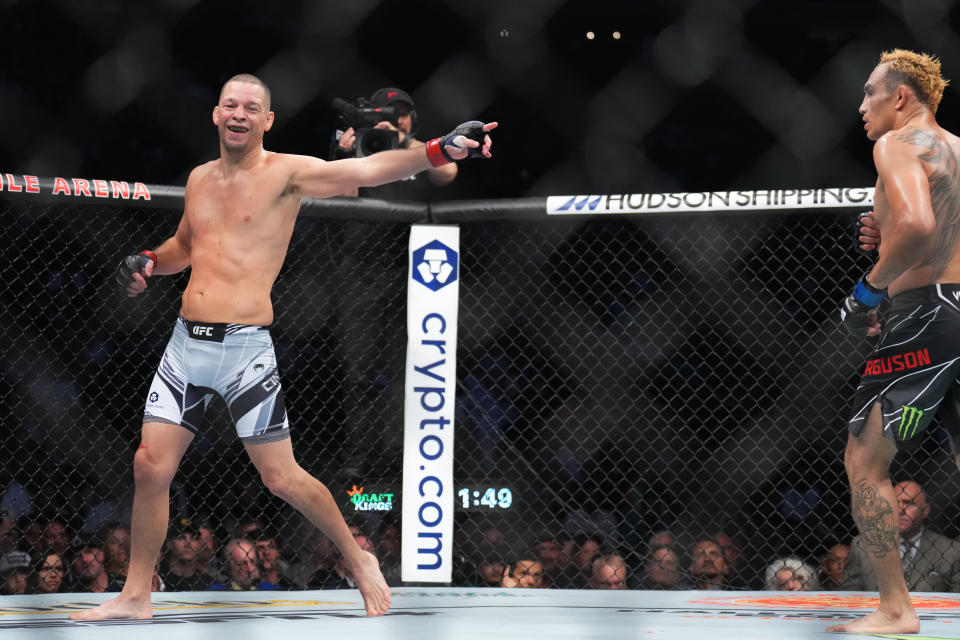 Nate Diaz’s exit interview from the UFC went about as expected after an incredible turn of events during fight week meant he’d be facing Tony Ferguson on short notice in the main event of UFC 279 instead of Khamzat Chimaev. Diaz locked in what may end up being the final submission of his UFC career in the fourth round when Ferguson shot in for the first takedown of the fight. Ferguson ended up tapping out to a guillotine choke seconds later for his fifth straight loss.

In his post-fight interview with Joe Rogan, Diaz said he’d like to go conquer another sport, but will be back to the UFC.

“It’s been a love-hate relationship,” Diaz said, “but at the end of the day I love the UFC.”

Chimaev’s weight issue cost him the main event spotlight versus Diaz, but not a spot on the card as he was given Kevin Holland to face in catchweight bout in the co-main event. It turned out to be a thrashing as Chimaev quickly took down Holland and stayed in control before submitting him with a D’arce choke minutes into the first round.

No. 14-ranked welterweight Li Jingliang and Daniel Rodriguez agreed to fight each other at a catchweight of 180 pounds just one day before the two met in the cage Saturday. Their fight ended up going the full three rounds in what amounted to a striking battle with both fighters mostly staying at distance. Rodriguez took the fight on two of the three judges’ scorecards for the split decision victory.

Irene Aldana and Macy Chiasson went back and forth in the first two rounds of their catchweight bout at 140 pounds. Aldana clearly won the first round after dominating Chiasson and even forcing her to tap out to an armbar, but it went unseen by the referee. Chiasson stormed back in the second and dealt Aldana some vicious ground and pound. In the third and deciding round, with Chiasson backing out of top control, Aldana caught her with a brutal up-kick to the liver. Chiasson crumpled to the ground and the fight was stopped.

Johnny Walker, who had lost four of his last five fights, opened the pay-per-view with a first-round submission of Ion Cutelaba in their light heavyweight matchup. The No. 13-ranked Walker had entered the fight as a +170 underdog and improved his record to 19-7. Cutelaba is now 16-8 after going 1-4 in his last six with one split draw.

Yahoo Sports’ Kevin Iole is cageside for the show at T-Mobile Arena in Las Vegas so follow our live tracker below for all of the latest updates and analysis.