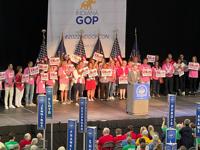 INDIANAPOLIS—Incumbent Secretary of State Holli Sullivan was defeated Saturday afternoon in a vote by Indiana State Republican Party convention delegates who gave a majority to challenger Diego Morales on the second ballot.

Sullivan, a former state representative who was appointed to the office in 2021 after the resignation of Connie Lawson, received 561 votes to Morales’ 847, which gave the challenger a majority of the convention votes needed for nomination. Morales will face Democrat Destiny Wells, who was nominated without opposition Saturday in Indiana Democrats’ state convention, and Libertarian Jeff Maurer in the November election.

The Republican convention at the Indiana State Fairgrounds Coliseum also nominated candidates for the offices of Auditor of State and Treasurer of State.

Speaker of the House Todd Huston led the convention by urging party unity, saying, “I support all Republicans, even if we don’t agree on everything.”

The Republicans had one candidate run for Indiana Auditor of State, incumbent Tera Klutz, and four candidates run for each of the offices of Indiana Secretary of State and Indiana Treasurer of State.

On each ballot, if a candidate did not receive 50% of the votes, the candidate with the lowest number of votes was dropped, and the next ballot without that candidate was issued to the delegates.

The duties of the Indiana Secretary of State have historically been to preserve the state seal and maintain state roads. It has since been expanded to include the chartering of new business, regulate securities industry, oversee state elections, the registration of trademarks and licensing of vehicle dealerships and commissioning public notaries.

Coming out with the victory for the Secretary of State nomination after two ballots was Morales, a National Guard veteran and small business owner. Morales said he plans to increase election security and purge the names of ineligible voters.

Madison County Republican Chairman Russ Willis introduced Morales to the convention, saying, “Diego is the epitome of the American Dream. He came here as a legal immigrant in high school.” Willis also added, “Diego has a unique background and can welcome new people to our party.”

“This could only happen in America. This is the American Dream. We must fight to keep it,” said Morales. “In order to do so, we must secure our elections.”

The Indiana Treasurer of State is in charge of upholding state fiduciary responsibilities, investing and safeguarding public funds, managing state financial assets, and providing timely and accurate funding to state and local stakeholders.

Daniel Elliott, chair of the Morgan County Republican Party,  won the Republican nomination for Treasurer on the third ballot, in a close battle with Boone County Council President Elise Nieshalla. Fort Wayne city clerk Lana Keesling and Pete Seat, the former spokesman of the state party, were eliminated on the previous ballots.

Elliott emphasized the importance of having a proven conservative in charge of the state’s money. Elliott said, “I am the one who has proven he is the conservative in this race. Every [candidate’s] flyer we’ve seen has said conservative on it, but I am the only one whose shown it.”

Elliott also addressed his complaints with inflation and Washington, saying, “Due to Bidenflation, there is so much financial turmoil right now… I will stand on the wall and protect us from those who are fighting to force their agendas down our throats.”

The Indiana Auditor of State is responsible for maintaining State accounts, and services such as state employee compensation and distributing tax money.

While accepting her nomination, Klutz said, “I am your employee, and you are my boss.” She also made it clear this is the only office she wants to hold, saying, “I am uniquely qualified for this position and have no other political aspirations.”

Zachary Roberts is a reporter for TheStatehouseFile.com, a news website powered by Franklin College journalism students.