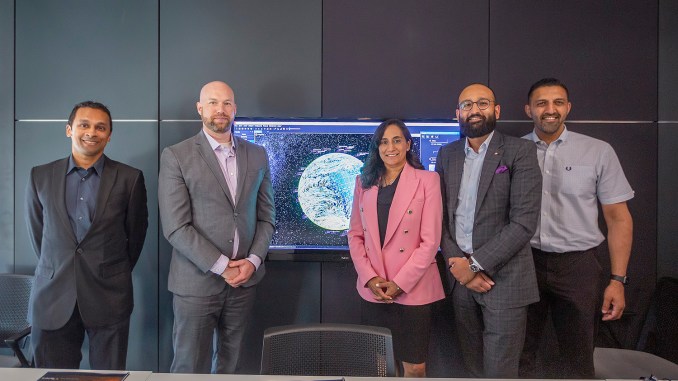 Platform Calgary was the site of a different type of technology demonstration than what has commonly occurred at the tech industry incubator.

Minister of National Defence Anita Anand met with local defence contractor and technology firm Tacteris Systems to be given a demo of software they have created to support Canadian troops at home and abroad.

Tacteris was also the recipient in May, for a $1.2 million in Ideas for Defence Excellence and Security grant from the federal government for their Forte logistics planning software.

“It is of the utmost importance to continue to foster innovation in the defence sector, as well as in the economy writ large,” said Minister Anand.

“There is ingenuity in the Canadian economy and in Canadian business, and I’ve witnessed it right here today in Calgary. I couldn’t be more proud to have seen what I saw today with Tacteris.”

“I think I’m just very delighted that we were able to demonstrate to a senior level official what the capabilities of our technology are, and that this is technology that we built right here in Canada,” said Sundeep Kharey, vice president of business development for Tacteris.

“As I said in the meeting, getting this technology in the hands of Canadian service members has been one of our implicit goals from day one when we started this whole business.”

Kharey said that overall Calgary holds its own as a defence city, although it’s often overlooked in the wider discussion about the technology industry. He pointed out how Calgary is home to teams for General Dynamics, Raytheon, and Lockheed Martin.

“In some ways, we’re insulated from sort of the Silicon Valley or the West Coast style,” Kharey said.

Chahal said that there was an opportunity for Platform to play a role in the civil defence and military defence industry.

“Platform Calgary is a great incubator, and that’s a collaboration providing opportunities for small startups to larger companies to be able to grow build and grow here,” he said.

“One thing we need here in our city is to diversify our economy, and this is a leading example of collaboration and partnership between levels of government, but also startups to larger businesses working together to make that happen.”

Trio of technologies in place for military and civil defence agencies

Kharey said that the Forte tool they developed could potentially help the military to plan and sustain missions.

“So whatever our [Department of National Defence] operations happen to be, we’re developing a software solution that helps us plan what supplies will need to be deployed to that, and not only initially, but also to sustain that mission over time,” he said.

Kharey used the example of planning to supplying sufficient water to troops in the field.

“At the end of the day, it is the soldier that suffers when you don’t have enough water, and that’s the quickest way to destroy morale,” he said.

“So, solving that logistics challenge is something that we’re working on right now.”

During the demonstration, Kharey was able to develop a real-time response plan to a hypothetical scenario created by the Minister on the fly.

“So if you have a wildfire or you’ve got a pandemic and you have multiple agencies that need to work together, and coordinate resources, there’s really no way to do that right now—it’s all done through very ad hoc manual technologies,” Kharey said.

“You pick up the phone and you say, ‘hey, can you still have those fire trucks available?’ So we’re developing a software solution to basically do that, and make that a very very simple process.”

The defence contractor is also developing a self-contained battle management suite in a box, which requires no server infrastructure to be deployed. The development has been pre-qualified by the Canadian Government.

“It’s really a state-of-the-art, one-of-its-kind on the planet, where it doesn’t need any sort of mapping infrastructure or intelligence databases or servers,” said Kharey.

“You just have a computer you open it up and you have a full battle management suite at your disposal, and you can collaborate and work in teams.”

The demonstration of that technology promoted the Minister to declare that was exactly what she needed.

Kharey said it was heartening to hear that, and it is something they hear a lot from clients.

“I think what we have developed, and the way we’ve solved this problem by integrating time, space and organization—those three elements are not often integrated well in other solutions,” he said.

“So it’s very often to go to a military meeting and hear, ‘wow, this is unlike anything I’ve ever seen.’”

The lengthy time it takes for procurement arms of government to match up with the demands of senior officials and military commanders is the biggest challenge Tacteris faces, said Kharey.

“A minister or a commander of the army can say this is fantastic, but then you have a whole procurement arm that you need to deal with that may not be in alignment with that,” Kharey said.

“Software development, developing novel technologies, is really the fun and easy part. The biggest challenge is getting this into the end in the hands of end users, military end users.”

He said that getting the chance to demonstrate the software to senior officials is one way that they’re attempting to bring their made in Calgary solutions to Canada. The other side, he said, getting the support of industry partners like Platform and local government to build awareness.

“I think it really helps because it reminds everybody in Canada that we are we’re here, our system is proven, were low risk, and we’re ready to go,” Kharey said.