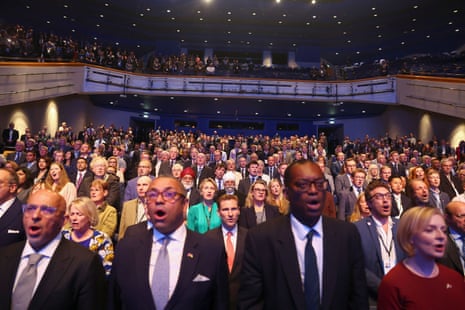 Gove is now taking questions from the audience. A man says Gove said the party should come together after the leadership contest. Is is actually following his own advice?

He says he has two concerns about the mini-budget: the tax cuts being unfunded, and the abolition of the 45% top rate of tax. It would be “wise to reflect” on those policies, he says.

Q: You mean they should be dropped?

Gove says the abolition of the 45% is wrong. The government should drop the idea, he says.

This was implied by what he said on the BBC’S Sunday with Laura Kuenssberg, but he is being more explicit here.

Kwarteng’s budget only got a qualified endorsement from some panellists at an Institute for Economic Affairs (IEA) event and Taxpayers’ Alliance event. Gerard Lyons, an economist who has advised Liz Truss, said the government could not make steep cuts to public spending after abolishing the top rate of tax. He said:

To take your target audience with you, this is not just about communications. Successful economies need to have clarity, predictability and credibility in terms of their strategy and policy … Markets need to be convinced changes in fiscal policies are necessary and not inflationary.

And for the general public, the very important message is that the social contract is a vital part of our postwar fabric … You cannot have a return to austerity and cut the top rate of tax at the same time.

He gave the budget a 7.5 out of 10 on substance but said the problems with it had dominated the last week.

However, the budget was fully endorsed by Chris Philp, the chief secretary to the Treasury, who gave it 9.5 out of 10, while acknowledging that there could have been some better “pitch-rolling” to warn people about the policies coming.

He also signalled the government is preparing to go much further on
deregulating businesses. He said:

At the Tory conference the activists in the hall have just followed Labour’s example and sung the national anthem. At the Labour party the singing of the national anthem was a story (even though criticism of the move did not get much further than a mildly sceptical comment from Jeremy Corbyn). At Tory conference is looks more like something they would do every year (although they don’t.)

Brandon Lewis, the justice secretary, told a fringe meeting at the conference that he was “hopeful” that the long-running strike by criminal barristers in England and Wales would end after the government offered them “a comprehensive package” including a 15% fee increase.

It’s a comprehensive package that deals with the issues that need to be dealt with and actually puts the whole structure, particularly for the junior bar, in a very different place in terms of covering off some of the issues.

At the Tory conference they are now showing video of all former Conservative prime ministers who are still alive – John Major, David Cameron, Theresa May and Boris Johnson – talking about their dealing with the Queen, and in particular how much they valued their audiences with her. It may be all the activists get to see of Johnson at this event.

The formal conference proceedings have finally started. As Ben Quinn explains in a conference guide, this year speeches are taking place between 4pm and 6pm. The joke in the press room is that they’ve scheduled it like this so that most of the speeches will take place after the stock market has closed, limiting the opportunity for any cabinet ministers to crash share prices any further.

The first speech was from Penny Mordaunt, leader of the Commons, who paid tribute to the late Queen.

The former Spice Girl – Melanie Brown – has told an event at the Conservative Party conference of her fears that the “massive issue of domestic abuse” will slip down the agenda during “these times of absolute economic chaos.”

The singer, known to millions as Mel B or ‘Scary Spice’, was speaking at a meeting organised by the Sun and Women’s Aid, which she became a patron of in 2018 after leaving what she described as an abusive relationship.

“We need to reform everything, the courts, the police, even GPs, even people in your work environment, HR, you need to have a safe place where you can go without any shame and know the warning signs,” said Brown, who was made an MBE for services to charitable causes and vulnerable women.

Women’s Aid is publishing research which found that 40% of adults believe that people who carry out domestic violence against women were enabled by sexism, compared to some 60% who felt the opposite and regarded it – in the words of the charity’s CEO – as “bad people doing bad things”.

“What we have is a real gap in people’s understanding of how prevalent this crime is,” said Farah Nazeer, chief executive of Women’s Aid. She went on:

We are not ready yet as a society to support women and that is the fundamental question. This is due to sexism and misogyny that underpins all those systems. They are not created to recognise the harm that women face on a daily basis.

The new Women’s Aid research also found there was a 15% drop in how seriously people regarded an instance of domestic abuse, such as if a man slaps his wife, if the perpetrator apologised afterwards.

I had a positive and warm meeting with Liz Truss when we met the weekend of the funeral of Queen Elizabeth.

I did, to be fair, detect a genuine engagement and a wish to get this issue resolved.

I think she would prefer a negotiated solution and the subsequent meeting between Liz Truss and Ursula von der Leyen [European Commission presiden] went well also and I think in many respects it’s about getting this into a process between the European Union and the United Kingdom to get this issue resolved once and for all, not least because of the issues [like] the war in Ukraine, the energy crisis.

Europe and United Kingdom need to be acting together on that.

Really the protocol should not be an issue causing that degree of distress in the relationship between the European Union and the United Kingdom.

The Scottish Conservative MP Andrew Bowie has told BBC Radio Scotland that he agrees with what Michael Gove told the BBC’s Sunday with Laura Kuenssberg this morning about unfunded tax cuts being a mistake. (See 9.14am.) Asked if Gove was right, Bowie replied: “Yes, he’s right.”

He also said that that if the government were to cut benefits to fund these tax cuts, that would be a mistake.

In principle, cutting welfare to pay for tax cuts would not be the right thing to do. But that’s not what’s been laid in front of us.

Bowie said he wanted to give Kwasi Kwarteng, the chancellor, time to “expand” on his plans. He said:

I share people’s concerns about where we are right now. But I think it’s incumbent on all of us to give the chancellor the space and the time to expand on those plans and set out more detail, and for us to be able to determine whether or not we support those plans.

But he refused to say that he would vote for the mini-budget. Asked what he would do, he said:

We’re going to take a decision based on what those plans are, and every Conservative MP will have to examine those plans in detail and in depth and come to a decision as to whether or not they support it.

Jacob Rees-Mogg, the business secretary, has played down the significance of the protesters who booed him at the conference in Birmingham. (See 1.32pm.) He told Sky News:

There have been protests at Tory conferences since time immemorial, it’s nothing new. It’s a fact of democracy. They’re shouting but it’s perfectly peaceful. And the right to peaceful expression of your view is fundamental to our constitution.

November 26, 2022
Stand up comedy booms in Venezuela, but politics are off stage