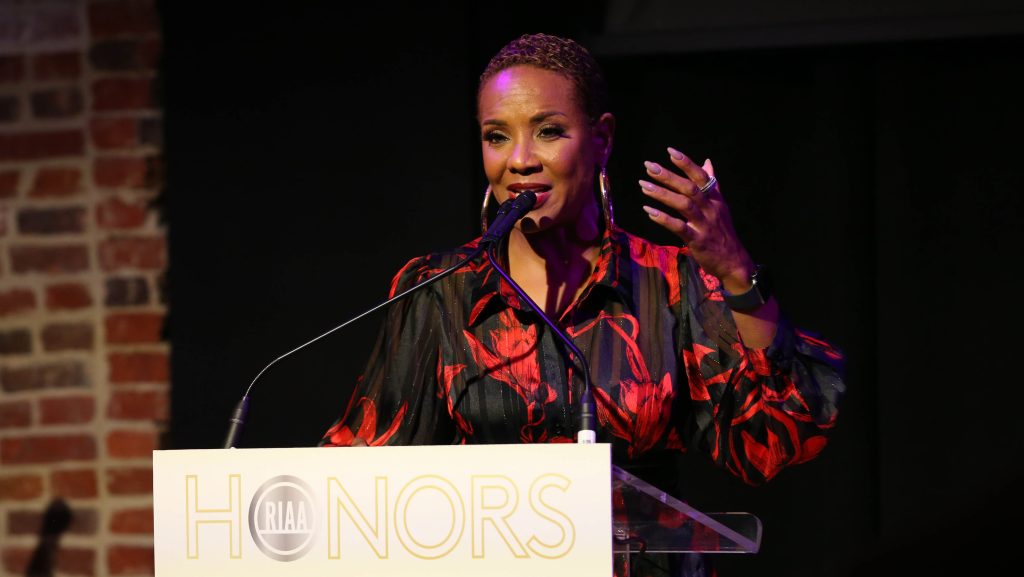 Being at the forefront of a movement is widely viewed as an admirable endeavor, particularly in hindsight. The journey, however, requires a fortitude usually reserved for a leader and vanguard—two traits applicable to MC Lyte. For the Brooklyn native, tenacity came with the territory, helping to power Lyte’s rise as a pioneer and trailblazer for women in Hip-Hop, a role she’s assumed with pride since her early beginnings.

At the Recording Industry Association of America headquarters in Washington D.C., the decorated veteran was celebrated as part of its inaugural Hip Hop Honors event. The occasion was a festive one, with the who’s who of rap royalty in attendance. Lyte’s former labelmate and longtime friend Yo-Yo made the trek to the nation’s capital to help present the honor, while rap star and mentee Rapsody was also in the building for a tribute performance.

“Well, you know, it’s fantastic because I happen to have friendships with both of them, and they actually have a friendship as well,” Lyte told VIBE of Yo-Yo and Rapsody. “So it’s like a circle of sisterhood, including Yo-Yo, who I understand is going to be here. And for all of those who aren’t even here, they are here in spirit because we represent one another. So it feels good.”

Honored alongside fellow Hip-Hop pioneer DJ Grandmaster Flash, music executive Jeffrey Harleston and U.S. congressman Hakeem Jeffries, MC Lyte voiced her appreciation to the RIAA. “Like any other time when you’re being acknowledged for your work, I was happy,” expressed Lyte. “I was excited, and I knew that I had done a good thing. That I had done some good work within the community, and they were choosing to recognize me and acknowledge those works. So if anything, it just ignited me to want to do more because this isn’t the end. This is just halftime, but I’m just as excited about the next decade, two decades of work that I will do.”

And Lyte has shown no signs of slowing down. As she continues to host various events and is less than a decade removed from her last full-length album release, her resume remains one to marvel at. After releasing her 1987 introductory single “I Cram to Understand U (Sam),” Lyte unleashed her debut album, Lyte as a Rock, the following year. The first full-length album released by a solo female rapper, it was hailed as an instant classic. With hits like “10% Dis” and “Paper Thin” ringing from the streets of Flatbush to the suburbs of middle America, the album minted Lyte as a force to be reckoned with, breaking ground for women lyricists.

Though Lyte as a Rock was a modest success, her sophomore effort, Eyes on This, would prove her reign was no fluke. The 1989 LP became the first album by a female solo rapper to chart on the Billboard 200, remaining on the chart for 20 weeks. Lyte also became the first solo female rap artist to break into the Top 10 of the Billboard Top Black Albums chart. Eyes on This also produced multiple Top 10 rap singles, with its biggest hit, “Cha Cha Cha,” peaking atop the chart, another first for the petite B-Girl with the gruff voice.

Returning nearly two years later, Lyte dropped her third LP, Act Like You Know, in 1991. That release saw her crack the Billboard Hot 100 for the first time with the single “Georgie Porgie.”. Still, it was her fourth studio album, Ain’t No Other, that saw Lyte reach the apex of her stardom. Released in 1993, it became her third album to crack the upper half of the Billboard 200 chart, much on the strength of the runaway smash “Ruffneck,” her biggest single to that point. The track would reach No. 35 on the Billboard Hot 100 and was certified gold by the RIAA, making her the first solo female rapper to accomplish that feat as well.

Despite the overwhelming success, according to Lyte, that time in her career is admittedly a blur. One memory she’s managed to hold on to is getting the news of her Best Rap Solo Performance nomination for the 36th Grammy Awards.

“I remember being on a tour bus. I remember us not having cell phones just yet, we had a phone that was in a bag,” she recalled to VIBE on her celebratory night. “And so literally, when we got the news, we stopped at a truck stop so that we could call all of our friends and family and tell them the news about the nomination. But I think that was really close to when we had certified by the RIAA [for the] gold plaque.”

Lyte’s hot streak would continue with her 1996 release, Bad as I Wanna B. She earned two additional gold certifications for the singles “Cold Rock a Party (Bad Boy Remix)” featuring Missy Elliott, and the Xscape-assisted number “Keep On, Keepin’ On,” which remains her highest-charting song to date. After dropping her sixth studio album, Seven & Seven, in 1998, MC Lyte would release two additional solo albums and one collaborative effort. She has since dedicated much of her time to endeavors outside of recording, including various film and TV projects.

Even so, MC Lyte remains acutely aware of the multitude of female rap artists who have built upon her legacy over the years. Fellow legends like Lil’ Kim, Foxy Brown, Eve, and Missy Elliott all followed in Lyte’s footsteps to reach platinum success, while current stars like Nicki Minaj, Megan Thee Stallion, and Cardi B still work toward her most impressive accolades. While Lyte takes pride in being the first female rap soloist to gain widespread recognition, she acknowledges that she’s only one in a long line of women who have and will continue to raise the bar for Hip-Hop.

“It feels good,” Lyte said of witnessing the increasing popularity of female rappers. “I mean, that’s what it’s all about. It’s a building upon. No one is starting on ground zero. That was done for us a long time ago, and that was Sha-Rock and Pebblee-Poo, and they started from ground zero. And since then, all we’ve been doing is laying bricks, laying bricks, you know. Each of us get the opportunity to lay some bricks in this wall of prominent women in Hip-Hop. And so, if you can imagine, as that wall gets taller, they’re able to see further. They’re able to reach higher heights, so it feels great. We all get to celebrate in that.”