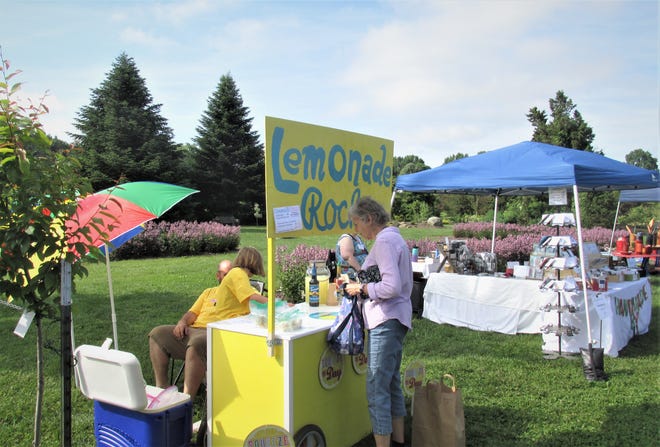 WOOSTER — Josh Peterson knew his daughter, Addie, would be successful with her lemonade stand because she’s always had a nose for business.

Peterson recalled how over the winter, his 8-year-old set up a concession stand in the basement of their house and was selling items from the freezer back to her father.

Addie was part of Wayne County’s Lemonade Day on Saturday. The event was put on by the Wooster Area Chamber of Commerce, and is part of a national program created by the Lemonade Day organization. Peterson was proprietor of one of 21 stands set up around the Wayne County with the goal of helping children to better understand how business works.

The third-grader at Parkview Elementary School in Wooster hoped to raise enough money to buy a fish for her aquarium, and she had a bit of good fortune with her location.

As any good business person know, it’s all about location, location location

“We had a bit of construction on our road, so we couldn’t have the stand at our home, but her grandfather had a booth set up here at the craft show at Secrest Arboretum and it worked out nicely,” Peterson said. “Addie had a piece in just about every part of putting this all together, from making the lemonade, helping built the cart, as well as the planning.”

A quarter of the proceeds Peterson raised were going to Persophenea’s Giving Plate, a local charity that helps the Salvation Army get food to those in need.

The young entrepreneur had everything going her way Saturday; she had a great location with built-in traffic from the Garden Fair, taking over for the former Quail Crest Garden Fair that recently retired. The weather also was picture-perfect, and she had good product.

“This lemonade is delicious. I’m going to have to come back for seconds,” said Lisa Lentini of Wooster, one of Peterson’s many satisfied customers.

Friendly Wholesale:Owner: ‘We are keeping and growing the employee base here’

Henry Miller, 9, was another young entrepreneur. Proceeds from his lemonade stand outside of Ambolina’s Flowers and Gifts on Main Street in Dalton will be donated to his Cub Scout Pack 922, with help from the Dalton Presbyterian Church.

Henry’s mother, Jen Grimm, said she learned a lot from helping with the project. She said her sacrifice to the day was preparing the freshly squeezed lemonade, along with helping to get the word out about the stand through the church, the Scouts and social media.

Henry said he hoped to raise $100. The money will all be donated to his troop.

“Henry actually won a raffle prize from the Chamber of Commerce for Acres of Fun,” Grimm said. “We’re hoping to take the Cub Scout troop there with the money he raises. It should be fun.”

Lynn Marks of Dalton was a happy customer who congratulated Henry and his mom for making such good lemonade.

“This is the best lemonade I ever had,” Marks said. “Thank you very much.”

At Brothers Lemonade, a stand set up by Julian, 8, and Alexander “Quinn” Flores, 7, of Orrville with the help of their mother, Genevieve, in the parking lot at Local Roots on South Walnut Street, they offered treats along with lemonade. The treats included lemon and lime flavored popcorn and cotton candy.

The boys helped their mother make the treats. She said it reminded her of when her mom helped her put up a lemonade stand when she was young.

The brothers hoped to raise funds to pay for their karate lessons. They were wearing their gi as part of the promotion.

“They are supposed to spend it, save it and donate,” Genevieve said. “They are spending it on karate lessons, saving it for their future and donating to the Orrville Salvation Army.”

Making for a perfect day

Adriane Ball of Wooster helped the cause by purchasing a drink from Brothers Lemonade. She said it helped to make her day.

“I’m getting sausage, biscuits with gravy inside, and lemonade outside here, it’s going to be a beautiful day,” Ball said.

Marcus Patino, 5, manned his Space Lemonade stand on East Liberty Street, Wooster, wearing a spaceman suit. His father, Daniel, said Marcos put a lot of work into helping with the stand. He hopes to buy a bicycle with the funds he raised.

With lemonade stands in Wooster, Dalton, Marshallville, Rittman and Shreve, there were many great learning opportunities for the children of Wayne County, and no reason for anyone to go thirsty.

Kevin Lynch can be reached at klynch@the-daily-record.com.