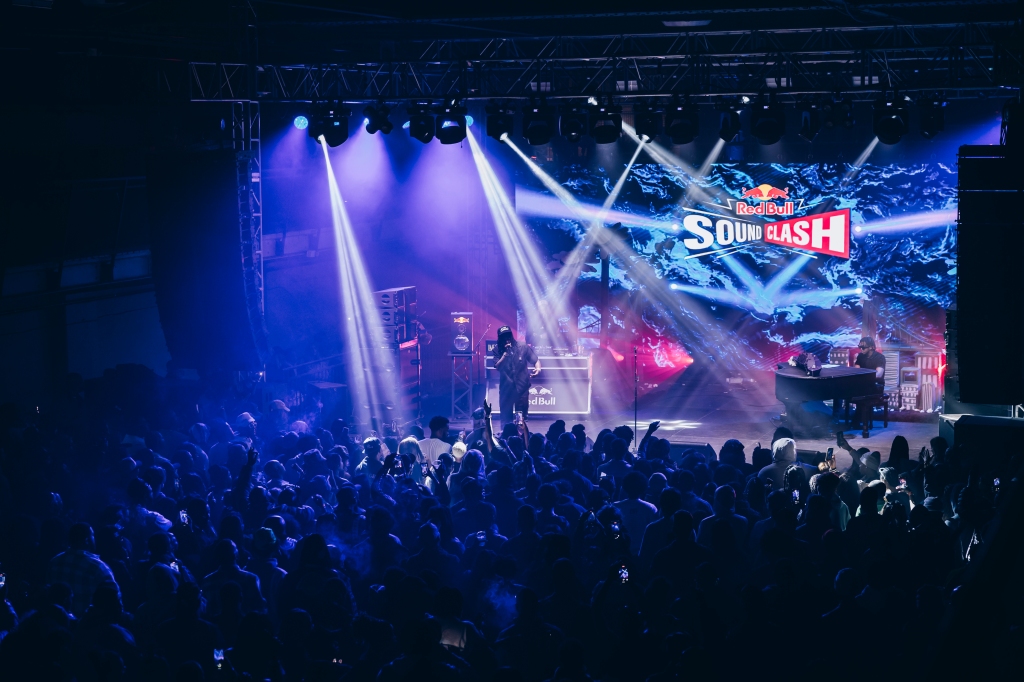 One night in October, Red Bull introduced Soundclash to Detroit with the ultimate showdown between Babyface Ray and Larry June. A sold-out audience of 1,800 people layered in the city’s signature style of ornate jackets and Cartier Buffs, endured the brisk autumn air to pack out the Russell Industrial Center. Once inside, fans sipped curated cocktails and cliqued up in small groups in front of two stages, waiting to hear their favorite songs from both rising stars.

Signage highlighting the friendly competition amped up “Detroit vs The Bay” however the showcase from the rappers, and their special guests, was proof of the two cities’ musical and cultural connection.

Through the dark arena, which glowed with blue stage lighting and choking weed smoke, the audience showed a fair balance of love for both Babyface Ray and Larry June. As the venue warmed up and outerwear got removed, it was clear that were as many groups of fans decked out in the Bay Area rapper’s Midnight Organic merchandise as those who wore homegrown Detroit fitted caps and Babyface Ray t-shirts.

“I don’t know, Larry a fly guy,” said the “6 Mile Show” rapper to VIBE ahead of the Red Bull Soundclash when asked about his potential hometown influence.  “I don’t even know if I got an advantage, but we’re going to make it do what it do.”

Most in attendance were excited to see both, staying toward the middle of the venue to catch a solid look at both stages. As the clash kicked off, ticketholders were treated to a showcase of deep cuts, trendy hits, and guest performers, leaving everyone a winner.

In his hometown, Babyface Ray kicked off the night, proudly taking the stage in front of a supportive audience, many of whom have been fans of his since his early career days. Fully in his element, the 31-year-old rapper put on for Detroit.

“It’s my job. We are preparing for it damn near every day,” said the rapper of his preparation. “It’s what we do for real.”

Performing songs such as “#1 Fan” Babyface held the mic toward the onlookers who rapped along to every word. As his time ran out, the bulk of the crowd shifted to the second stage as Larry June prepared his takeover.

The San Francisco representative appeared centerstage with his signature, laid-back demeanor. Larry June ran through fan favorites such as “Smoothies in 1991” as he embraced the love from the party of people.

The Detroit audience fully welcomed the presence and power of June’s organic movement. June trekked the stage back and forth with a warming, cheerful delivery, making sure to connect with all sides of the massive crowd.

“Say good job, Larry,” he requested as everyone in attendance shouted his affirmative adlib back.

As the night continued, the connection between The Bay area and The Midwest metropolis was fortified in sound as special guests joined each artist on stage. Larry June enlisted the talents of Motor City legends Slum Village as well as Payroll Giovanni and Boldy James. Although not from the D, Curren$y also joined in on the moment.

Babyface Ray called on Baby Money, Icewear Vezzo, Lucki, and Landstrip Chip to make the city proud. Together for the first time, Ray and June performed their collaborative effort “Extra of Um” from the latter’s latest album, Spaceships on the Blade.

Detroit served as the first round in the two-city series. Red Bull Soundclash takes Babyface Ray to Larry June’s turf in San Francisco next month for their second and final faceoff. On Nov. 11, the two are scheduled to bring the show to another sold-out audience at the Regency Ballroom.

Individually, Larry June and Babyface Ray have their own established brands and together they complement in sound and spirit. After the magical moments in the midwest, both rappers are tasked with returning to the stage with valiant efforts to push their artistic bounds.

Red Bull Soundclash was established by the brand in 2006. Inspired by traditional Jamaican sound clashes, the series has hosted over 80 events worldwide featuring renowned artists like Snoop Dogg, Ludacris, and Erykah Badu.

In 2021, Red Bull Soundclash returned after a 10-year hiatus with faceoffs between Danny Brown vs. Rico Nasty, SHELLEY FKA DRAM vs. Westside Boogie, Bren Joy vs. Jake Wesley Rogers, and The Suffers vs Tank and the Bangas.