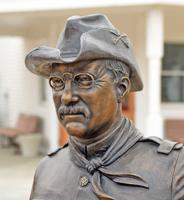 Organizers of the planned Theodore Roosevelt Presidential Library near Medora have secured land for the project.

The library’s foundation on Monday announced the sale of 90.3 acres of U.S. Forest Service land near the Medora Musical’s Burning Hills Amphitheatre after a lengthy appraisal. Congress approved the land sale in December 2020.

The land cost $81,000, covered by the family of the 26th president, who ranched and hunted in the Medora Badlands as a young man in the 1880s.

The Roosevelt family had committed $100,000 for the land sale. The sale price was based on the appraisal by the Forest Service.

“North Dakotans have ensured a legacy not just for their state but also for our nation and the world,” descendant Theodore Roosevelt V said in a statement. “I am pleased the Roosevelt family was able to purchase the land for the T.R. Library, honoring the life and legacy of Theodore Roosevelt, and helping advance the ambitious vision of the Theodore Roosevelt Presidential Library.”

A ceremony on the library land is planned for September. The Roosevelt family is expected to attend.

The remaining $19,000 from the Roosevelts will go toward a project to restore native plants to the library site and to cover administrative costs such as filing fees and current maintenance, according to Library CEO Ed O’Keefe.

The native plant project is to collect and cultivate seeds to increase Badlands prairie species, including rare and endangered plants.

Students, volunteers and ecology professionals will collect seeds this summer from across the Badlands for the library’s landscape, including the president’s Maltese Cross Cabin and Elkhorn Ranch sites. O’Keefe said a team was out last week collecting seeds and preparing the land.

“The mission of the U.S. Forest Service to sustain the health, diversity, and productivity of the nation’s forests and grasslands to meet the needs of the present and future generations, remains unchanged since its founding by Theodore Roosevelt in 1905,” Dakota Prairie Grasslands Medora District Ranger Misty Hays said in a statement. “It is good to see the Theodore Roosevelt Presidential Library plans to incorporate key aspects of that mission.”

A public meeting is set for Medora, likely the week of Sept. 19, for library organizers to present their development plans for public comment, according to O’Keefe.

The library’s groundbreaking is set for June 2023, with construction planned for 2 ½ years and a grand opening set for July 4, 2026.

The 2019 Legislature approved a $50 million operations endowment for the library, available only after supporters raised $100 million in private donations, a goal met in 2020.

Rob and Melani Walton, of the Walmart fortune, pledged $50 million towards the goal, but ultimately gave $15 million. It’s unclear why. Library organizers still raised the $100 million, according to O’Keefe.

He has not disclosed the total raised, but has said it is “in excess of $100 million.”

Stay up-to-date on the latest in local and national government and political topics with our newsletter.