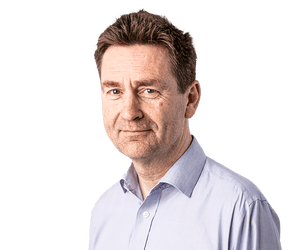 In his speech, published ahead of time, Andrew Bailey is expected to say that inflationary pressures will need a “stronger response” than previously anticipated in August.

The governor of the Bank of England is expected to say in a few minutes:

Recently, the UK government has made a number of fiscal announcements, and has set 31 October as the date for a further fiscal statement.

The MPC [monetary policy committee] will respond to all this news at its next meeting in just under three weeks from now. This is the correct sequence in my view.

We will know the full scope of fiscal policy by then. But I will repeat what we have said already. We will not hesitate to raise interest rates to meet the inflation target. And, as things stand today, my best guess is that inflationary pressures will require a stronger response than we perhaps thought in August.

The historic town of Downham Market in Liz Truss’s South West Norfolk constituency should be a personal bulwark in political crisis and economic turmoil. This weekend, confidence in the prime minister in her own Conservative heartland was ebbing away.

While officials in Downing Street contemplate whether Truss is now in her last days of office and MPs plot possible succession, the verdict on her record among the market stalls, coffee bars and busy shopping streets of the market town was harsh.

Sitting in the town’s Greggs bakery store, Ian Bond, 74, a retired engineering manager who was born in Downham Market, said he considered the mini-budget was “Black Friday” for the Conservative party.

The Sunday Times is reporting that the PM’s intermediaries contacted allies of Sajid Javid, the former chancellor, last week to gauge his appetite for a return to the Treasury to replace Kwasi Kwarteng.

The newspaper said Javid’s conditions were too much for Liz Truss to accept.

“Sajid would have only done it if he had complete control,” one ally of Javid’s said.

Three sources said Javid had insisted on full autonomy over tax-and-spend policies, the freedom to appoint his own political team and the reinstatement of Sir Tom Scholar, the veteran Treasury permanent secretary who was unceremoniously sacked by Kwarteng and Truss on their first day in office.

The new chancellor Jeremy Hunt is set to delay a 1p cut in income tax to help plug a black hole in the public finances that had reached £72 billion, according to the Sunday Times.

Hunt, who replaced Kwasi Kwarteng in the role yesterday, is expected to announce that plans to reduce the basic rate of income tax next April will be pushed back by a year.

The cut to 19 per cent will now take effect at the time previously proposed by Rishi Sunak, the former chancellor, who was Liz Truss’s main leadership rival.

Crossbench peer Lord Jim O’Neill said he presumed there would not be many “tensions” between Jeremy Hunt and the Prime Minister, because otherwise the government is “finished”.

The former chief economist at investment bank Goldman Sachs told BBC Radio 4’s PM programme: “I can’t imagine how the Prime Minister could afford to lose him quickly if she wanted to stay on herself.

“So in that sense, he’s got a lot of influence but his dilemma is the backbenches of this peculiar era of the Conservative Party is just full of so many different factions and many of them will be put out by Jeremy’s own history as evidenced by the fact he failed to become leader twice but also by what he implied now has to happen.”

He added: “I’m making what might be a really naive assumption that he’s only taken this job because he’s been given carte blanche by a desperate prime minister.”

Astonishing as it may sound to someone who has not paid attention to politics since about 2016, after little more than a month in office, a consensus is building that Liz Truss could be finished as prime minister.

But who could succeed her as the Conservatives’ fifth prime minister since 2016? Candidates include runner-up in the last contest Rishi Sunak, defence secretary Ben Wallace, and, of course, Truss’s predecessor, Boris Johnson.

Kwasi Kwarteng argued against scrapping the top 45p rate of tax in last month’s mini-budget but was overruled by Liz Truss, according to a report by the Mail on Sunday.

The paper said sources claimed Kwarteng wanted to wait until next year before introducing the measure for fear of “doing too much at once”, but was told: “No, let’s go for it.”

The mini-budget, delivered on 23 September, shook market confidence in the long-term ability of the government to pay its debts, causing the pound to plummet and the cost of government borrowing to soar.

The scrapping of the 45p rate was among the package’s most controversial measures.

Truss sacked Kwarteng on Friday as part of an attempt to reassure the markets and calm unrest on her own backbenches.

The new chancellor, Jeremy Hunt, is due to deliver a fiscal statement on 31 October.

MPs from across the Commons have been paying tribute to Sir David Amess on the anniversary of his murder.

Former home secretary Priti Patel said Sir David was an “outstanding public servant full of kindness, energy and integrity” who was killed in a “senseless attack on democracy”.

Sharing a photo of herself with Sir David, Conservative MP Alicia Kearns called him a “wonderful friend” and said “a man so full of love and joy shall never be forgotten”.

Labour’s Marsha de Cordova said she was remembering a “kind, caring and dedicated public servant”, while David Lammy called him a “politician who cared deeply about his constituency, animal welfare and so many issues beyond”.

Almost a fifth of all households in Britain will be spending more on housing costs by the end of 2024, analysis by the Resolution Foundation thinktank has found.

The group said the average mortgagor would be paying £3,500 a year more in the fourth quarter of 2024 than they were in the third quarter of 2022, and that the additional spend would be £26bn overall.

In London, the average additional spend rises to £5,500.

The thinktank said that, by the end of 2024, more than 1.8 million mortgaged households will see housing costs take up at least 10% more of their household income.

It added that by the first quarter of 2027, almost no mortgaged households would be unaffected by the rise in rates.

Writing on Twitter, Resolution Foundation chief executive Torsten Bell said the changes would be a “massive deal” for the economy.

Liz Truss’s premiership now depends on the success of the financial statement due to be delivered on 31 October, one of her MPs has said.

Sir Geoffrey Clifton-Brown, treasurer of the backbench 1922 Committee, had it put to him by LBC that should the statement fail to restore market confidence in the government, Truss would have to go.

“I think that’s exactly right,” he said. “I think a huge amount rests on that.

“If that statement – and God forbid, I hope this won’t be the case – doesn’t manage to satisfy the markets and satisfy everybody else, and the economy’s still in chaos, then I think we would be in a very difficult situation.”

He added that he was not “anticipating that happening”.

“I think [new chancellor] Jeremy Hunt is a man of sufficient calibre that he will come up with a solution that does command the confidence of the markets,” he said.

“And let’s hope, for the British people, … that does happen.”

New analysis by the Trades Union Congress has found that payouts to shareholders have increased three times faster than workers’ wages since the 2008 financial crash.

Shareholder handouts, through both dividends and companies buying back their own shares, have soared £440bn above inflation since 2008. Meanwhile, wages have fallen, growing £510bn less than inflation.

The TUC says the findings are evidence that firms do have the capacity for wage increases if they allow their workers a greater share of a business’s wealth.

“Too many businesses are lining shareholders’ pockets without giving workers a fair deal,” said the TUC general secretary, Frances O’Grady.

That’s it from me, Miranda, for today. Handing over shortly to Christy Cooney. Thanks for reading.

Here’s the full story on Starmer speech this morning (see also 11.52am):

Long covid could be contributing to labour shortages in the UK, the governor of the Bank of England has said.

Andrew Bailey told a G30 seminar that labour shortages are largely being driven by an increase in older people choosing not to work, with possible reasons including long covid, people with long-term health conditions being reluctant to work during the pandemic, and public health systems not treating people as promptly in a covid environment.

Climate change, he said, must be factored into “our everyday business”.

Andrew Bailey says he spoke to Jeremy Hunt yesterday and that they had an “immediate meeting of minds”.

During questions at a G30 seminar in Washington, Andrew Bailey said during their conversation there was a “very clear and immediate meeting of minds between us about the importance of fiscal sustainability”.

Hunt, he said, is now working on his 31 October financial statement.

Baily said that although he issued a statement on the Monday after the mini-budget, it is “not something I make a habit of doing”.

He said the two most important factors on fiscal policy are the importance of sustainability and having the Office for Budget Responsibility involved.

The OBR, he said, is “now very much back in the picture”.