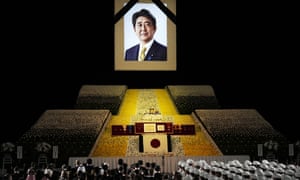 On Friday 8 July, Shinzo Abe, Japan’s former prime minister, was campaigning for his party in the city of Nara. Out of the crowd emerged Tetsuya Yamagami, wearing a surgical mask and holding a weapon. He fired twice, shooting Abe dead.

The Guardian’s Tokyo correspondent, Justin McCurry, tells Michael Safi that the killing stunned Japan, where gun crime is rare. In the months since, Japanese politics has been reeling, not just from the killing of the country’s longest serving prime minister but from the reason behind it.

After confessing to the murder, Yamagami revealed his motive: a grudge against the Unification church or ‘Moonies’, who he believed had links to Abe. As Japanese politics processed this, it emerged that there were an extraordinary number of connections between some of Japan’s most powerful people and the controversial church. It was an open secret that had never really been talked about – until the assassination made it impossible to ignore and created a major headache for the new prime minister.

The Guardian is editorially independent.
And we want to keep our journalism open and accessible to all.
But we increasingly need our readers to fund our work.