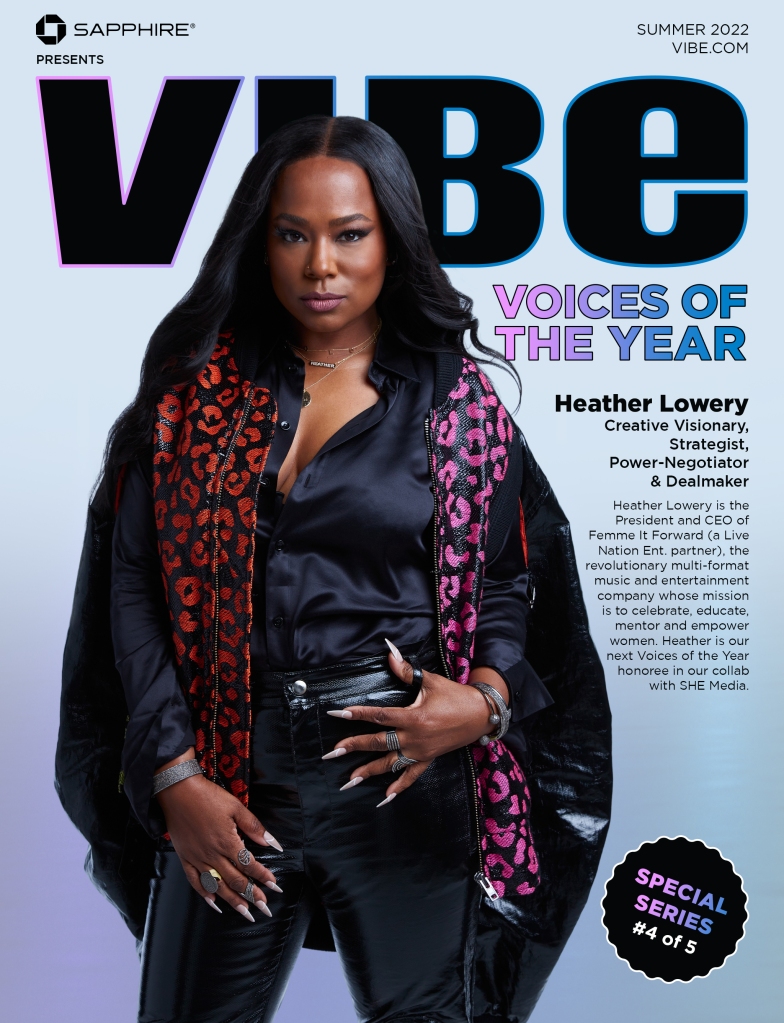 As Lil Kim’s bold rhymes play through a booming Bluetooth speaker, Heather Lowery channels her own boss energy into her VIBE cover shoot as the star. Taking keen direction from a skilled glam squad, including a stylist, makeup artist, and photographer, the entrepreneur poses confidently through each camera flash.  While her own spotlight is welcomed and deserved, Lowery’s work gives women in the entertainment industry their own shine.

From a young age, Heather Lowery knew her passions would take her far.  Growing up in New Castle, Delaware, she emerged as a self-described “small town girl with big dreams.”

Earning the nickname Heather Gold from her mother who had a dream foreseeing her power to make things happen, she proved to have the “Midas Touch.” While the accomplishments and accolades attained by Lowery prove Black Girl magic exists, there was no wand waving or spell casting that catapulted Lowery’s success. Her career is the manifestation of hard work, dedication, and the brave spirit necessary to take risks.

Lowery began her ascension at Spelman College, a private HBCU in Atlanta and from there she began building her empire.  While at Spelman, she was able to explore the depths and diversities of Black culture and grow into her own confidence as a Black woman. That experience powered the ability to be not only Black and focus on vision, but also embrace the beauty of boldness.


The foundation built through education and experience was fortified by a strong network and leaning into her talents and passions. Once the dream was realized, she refocused her goals of working in entertainment law to her live-event and talent relations reality. From the West End, her professional journey has shattered glass ceilings and permanently unlocked doors for herself and many others in fields connected to the music industry.

Along the way, Lowery made every job work for her, as much as she delivered for each employer. Willing to take on any role necessary to absorb knowledge and make an impact. This is evident as she started as a receptionist at the Philadelphia studio of Larry Gold and made her way to general manager.  At the neo-soul hub, she realized a desire to move elsewhere and briefly took time to reassess her ambitions.

“I knew that wasn’t my last stop, it was like my first stop in my journey,” she explains surely. “So after that, I kind of took some time to figure out, just kind of just re-explore what my passions are, my God given talents, and how can I combine them for a career.”

The ability to restart is one of Lowery’s best assets in the sense of understanding when her purpose is served or has evolved beyond the position at hand. Continuing her career journey as an assistant at the world renowned William Morris Agency, she landed into the management arena, working with the team of R&B star Bobby V (previously known as Bobby Valentino) before branching out on her own.

In 2005, the R&B singer became her first client and from there, for over a decade, Lowery built a brand in talent management. Highlights include creating relationships with HBCUs and booking many homecoming concerts and spring festivals, both cultural staples to the Black college campuses. She also booked one of Prince’s final shows.

As a “one woman army” Lowery decided that while successful in her endeavors, she had bigger ideas and eventually a conversation with President of Live Nation Urban, Shawn Gee, materialized into opportunity. She began as a VP for talent and touring for Live Nation Urban in 2017 and two years later, Femme It Forward was born.

As the founder, president and CEO, Lowery initially created Femme It Forward as a series of live performances and panels to give women on-stage opportunities. Despite opposing opinions, the events proved successful.

“I was like, okay, let me show you that this can work, and let me give these women more opportunities to perform together on stage with just women. And so I did that and launched that in 2019. It was crazy, because it was just literally an idea of my brain that there were some naysayers telling me that it wouldn’t work and I knew that it would, and the first show happened, the second, and third, it was insane because not only did we sell tickets, we were reaching fans and we were touching the industry and people just loved everything about them and forward than our mission.”

Through the platform, Lowery proved the need for Femme It Forward and the series became an official joint venture with Live Nation. Still, as the new idea blossomed, the world was faced with the beginning of the coronavirus pandemic, and live music was paused for the foreseeable future. As companies in the entire industry, many new ventures were started to take advantage of the digital realm.

Verzuz emerged at the forefront of lockdown entertainment, Lowery questioned the lack of female talent on the virtual platform. As the stage progressed from musical showdowns over sometimes botched wifi to organized productions and millions of viewers, she reached out to Swizz Beatz to bring women artists to Verzuz.

“With Verzuz, they were doing all the battles, in the beginning, they were just all male-heavy. The person that I am, I’m like, where are all the women battles? So I reached out to Swizz and I’m like, ‘You need some women battles.’  He was like, ‘Who you got?’ So I came up with a list of different pairings that I thought could work together, and I literally just started executing those artists on the list. That was my Verzuz moment, and it was an amazing time in history for us Black people, our culture, and for women. The women battles were breaking records. So it was very exciting and it was a moment in time that I’m very grateful to have been a part of.

As Femme It Forward continues to adapt to the new normal, a mentorship program was launched to usher in the next generation of thinkers, leaders, and doers in Lowery’s footsteps. The current class of Next Gem Femme have access to over 100 mentors with careers in marketing, publicity, live & touring, business development, talent management, artist relations, and more,  from companies such as Apple Music, Amazon Music, Billboard, CAA, iHeartMedia, Live Nation, Meta, Netflix, PUMA, Spotify, TikTok, Twitter, Warner Records, WME, UMG, YouTube and more.

Through the program, selected applicants will receive professional coaching, industry insights, networking, and relationship-building opportunities. With over 100 presented during the application acceptance period, the program promises at least half the spots to students and recent graduates of HBCUs, mirroring Lowery’s own trajectory.

“That’s something that I’ve always wanted to do in life. I knew that once I made it, I had to keep lifting as I climb. I knew that I had to keep reaching back to give those behind me, opportunities. I really just wanted to give young women of color the access and opportunities and resources that I never had. We launched during a pandemic and that too exploded. It’s crazy because so many women are getting jobs and internships and it’s mutually beneficial for not only the mentees but the mentors as well because they’re finding these amazing women that they’re putting on their teams.”

As she navigates a sometimes complicated industry making sure others are taken care of, Lowery makes sure to also prioritize herself and her needs. First and foremost is her loving duty as a Mom and wife. When she’s not connecting dots or creating opportunities she makes sure to stay centered and grounded as best as she can.  Whether it’s through reading or meditating, vacationing, exercising, or spending time with family, the music industry executive makes sure to find or create her own joy and continue a never-ending journey of self-improvement and understanding.

In the end, Heather Lowery’s life and career cannot be illustrated as a blueprint to success, but as a testimony to one of her greatest assets in her own perseverance. Aligning her love of big brim hats, which is her usual signature style, with a new business venture, HeatherGOLD hat collection. Also, taking her passion of music and women empowerment to the airwaves and streaming platforms, in 2021 Lowery executive produced her compilation album, Big Femme Energy, Vol. 1, featuring new and seasoned R&B and Hip-Hop talent like Tierra Whack, Kiana Ledé, Muni Long and Rapsody.

Yet, with all of the past, present and future wins, she maintains that staying the course and celebrating all wins of any size makes the road less traveled, a more comfortable journey for anyone who pivots to an unconventional path.

“I feel like as long as you follow your intuition and you pursue your passions and you allow your internal compass to guide you, I think that you’ll be okay.”