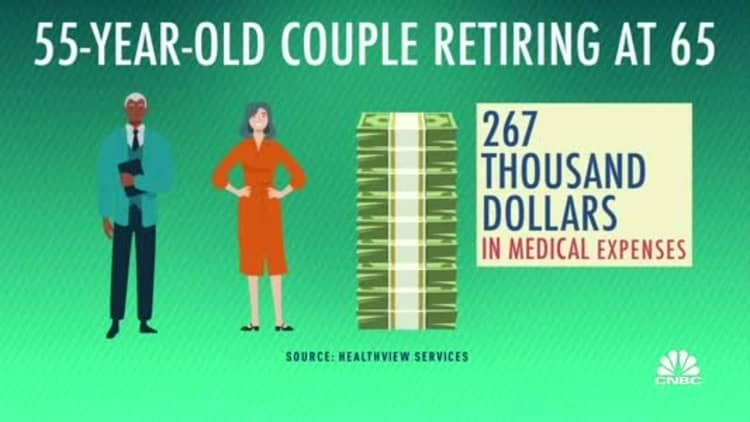 It’s open enrollment season, the time each year when millions of American workers and retirees must choose a health plan, whether new or existing.

But picking health insurance can be a dizzying venture. Health plans have many moving parts — which may not come into focus at first glance. And each has financial implications for buyers.

“It is confusing, and people have no idea how much they could potentially have to pay,” said Carolyn McClanahan, a certified financial planner and founder of Life Planning Partners, based in Jacksonville, Florida. She is also a medical doctor.

Making a mistake can be costly; consumers are generally locked into their health insurance for a year, with limited exception.

Here’s a guide to the major cost components of health insurance and how they may impact your bill.

The premium is the sum you pay an insurer each month to participate in the health plan.

It’s perhaps the most transparent and easy-to-understand cost component of a health plan — the equivalent of a sticker price.

However, employers often pay a share of these premiums for their workers, greatly reducing the cost. The average worker pays a total $1,327 per year — or, $111 a month — for individual coverage and $6,106 — $509 a month — for family coverage in 2022, after factoring in employers’ share.

Your monthly payment may be higher or lower depending on the type of plan you choose, the size of your employer, your geography and other factors, according to KFF.

Low premiums don’t necessarily translate to good value. You may be on the hook for a big bill later if you see a doctor or pay for a procedure, depending on the plan.

“When you’re shopping for health insurance, people naturally shop like they do for most products — by the price,” said Karen Pollitz, co-director of KFF’s program on patient and consumer protections.

“If you’re shopping for tennis shoes or rice, you know what you’re getting” for the price, she said. “But people really should not just price shop, because health insurance is not a commodity.

“The plans can be quite different” from each other, she added.

Many workers also owe a copayment — a flat-dollar fee — when they visit a doctor. A “co-pay” is a form of cost-sharing with health insurers.

The average patient pays $27 for each visit to a primary-care doctor and $44 to visit a specialty care physician, according to KFF.

Patients may owe additional cost-sharing like co-insurance, a percentage of health costs that the consumer shares with the insurer. This generally kicks in after you’ve paid your annual deductible (a concept explained more fully below).

The average co-insurance rate is 19% for primary-care and 20% for specialty-care services, according to KFF data. The insurer would pay the other 81% and 80%, respectively.

Co-pays and co-insurance may vary by service, with separate classifications for office visits, hospitalizations or prescription drugs, according to KFF. Rates and coverage may also differ for in-network and out-of-network providers.

Deductibles are another common form of cost-sharing.

This is the annual sum a consumer must pay out of pocket before the health insurer starts to pay for services.

Eighty-eight percent of workers covered by a health plan have a deductible in 2022, according to KFF. The average person with single coverage has a $1,763 deductible.

The deductible meshes with other forms of cost-sharing.

When you’re shopping for health insurance, people naturally shop like they do for most products — by the price.

Health plans may have more than one deductible — perhaps one for general medical care and another for pharmacy benefits, for example, Pollitz said.

Family plans may also assess deductibles in two ways: by combining the aggregate annual out-of-pocket costs of all family members, and/or by subjecting each family member to a separate annual deductible before the plan covers costs for that member.

The average deductible can vary widely by plan type: $1,322 in a preferred provider organization (PPO) plan; $1,451 in a health maintenance organization (HMO) plan; $1,907 in a point of service (POS) plan; and $2,539 in a high-deductible health plan, according to KFF data on single coverage. (Details of plan types are in more detail below.)

Most people also have an “out-of-pocket maximum.”

This is a limit on the total cost sharing consumers pay during the year — including co-pays, co-insurance and deductibles.

“The insurer can’t ask you for a co-pay at the doctor or pharmacy, or hit you for more deductibles,” Pollitz said. “That’s it; you’ve given your pound of flesh.”

More than 99% of workers with single coverage are in a plan with an out-of-pocket maximum, according to KFF.

Out-of-pocket maximums for health plans purchased through an Affordable Care Act marketplace can’t exceed $9,100 for individuals or $18,200 for a family in 2023.

Health insurers treat services and costs differently based on their “network.”

“In-network” refers to doctors and other health providers that are part of an insurer’s preferred network. Insurers sign contracts and negotiate prices with these in-network providers. This isn’t the case for “out-of-network” providers.

Here’s why that matters: Deductibles and out-of-pocket maximums are much higher when consumers seek care outside their insurer’s network — generally amounting to about double the in-network amount, McClanahan said.

There’s sometimes no cap at all on annual costs for out-of-network care.

“Health insurance really is all about the network,” Pollitz said.

“Your financial liability for going out of network can be really quite dramatic,” she added. “It can expose you to some serious medical bills.”

Some categories of plans disallow coverage for out-of-network services, with limited exception.

For example, HMO plans are among the cheapest types of insurance, according to Aetna. Among the tradeoffs: The plans require consumers to pick in-network doctors and require referrals from a primary care physician before seeing a specialist.

“Cheaper plans have skinnier networks,” McClanahan said. “If you don’t like the doctors, you may not get a good choice and have to go out of network.”

There’s crossover between high-deductible health plans and other plan types; the former generally carry deductibles of more than $1,000 and $2,000, respectively, for single and family coverage and are paired with a health savings account, a tax-advantaged way for consumers to save for future medical costs.

How to bundle it all together

Budget is among the most important considerations, said Winnie Sun, co-founder and managing director of Sun Group Wealth Partners in Irvine, California, and a member of CNBC’s Advisor Council.

For example, would you struggle to pay a $1,000 medical bill if you require health care? If so, a health plan with a larger monthly premium and a smaller deductible may be your best bet, Sun said.

Similarly, older Americans or those who require a lot of health care each year — or who expect to have a costly procedure in the coming year — may do well to pick a plan with a bigger monthly premium but lower cost-sharing requirements.

Healthy people who generally don’t max out their health spending every year may find it cheaper overall to have a high-deductible plan with a health savings account, McClanahan said.

Consumers who enroll in a high-deductible plan should use their monthly savings on premiums to fund an HSA, advisors said.

Cheaper plans have skinnier networks. If you don’t like the doctors, you may not get a good choice and have to go out of network.

“Understand the first dollars and the potential last dollars when picking your insurance,” McClanahan said, referring to upfront premiums and back-end cost-sharing.

Every health plan has a “summary of benefits and coverage,” which presents key cost-sharing information and plan details uniformly across all health insurance, Pollitz said.

“I’d urge people to spend a little time with the SBC,” she said. “Don’t wait until an hour before the deadline to take a look. The stakes are high.”

Further, if you’re currently using a doctor or network of providers you like, ensure those providers are covered under your new insurance plan if you intend to switch, McClanahan said. You can consult an insurer’s in-network online directory or call your doctor or provider to ask if they accept your new insurance.

The same rationale goes for prescription drugs, Sun said: Would the cost of your current prescriptions change under a new health plan?