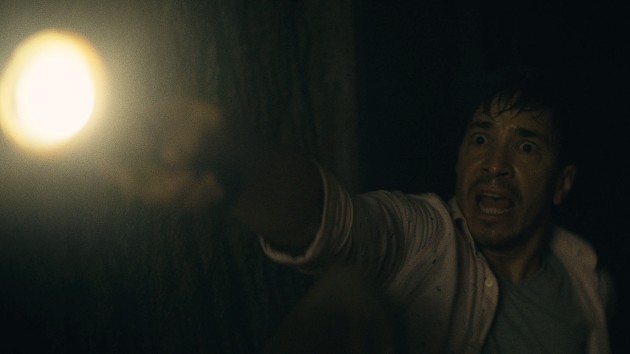 The horror film Barbarian took the top spot at the box office over the weekend, in the wake of great reviews and a 93% “Certified Fresh” label from the aggregator Rotten Tomatoes.

The movie was written and directed by actor-turned-filmmaker Zach Cregger, who explained to ABC Audio that the project began as an exercise: trying to write a scene in which a character encounters many “red flags” when meeting someone new.

In the movie, Georgina Campbell pays Tess, who finds a mysterious guy is living in the home she rented, and the red flags pile on from there. With that in mind, we wanted to know her own red flags.

“Well, I suppose in this scenario, like getting into an Airbnb and there being someone there is definitely a red flag,” she said with a laugh.

“You just have, like, an instinctual feeling of people really, don’t you?” she mused.

“Sometimes just the way someone looks at you or says something, and you get that feeling in your stomach that like, ‘Ooh … They’re not quite right,'” the actress laughs.

For Justin Long, who usually plays “nice guy” roles, it was a fun stretch to play AJ, a disgraced former star who also ends up in the increasingly creepy rental.

“I don’t normally get this opportunity to play guys who are so flawed … and so I had so much fun,” he says.

Of his character, he explains, “I know some guys like that. And so unfortunately, I had some things to draw from.”

He said of the first-time director, “Zach … gave us both a lot of freedom to play … and yet he had such a specific vision. So it was a really great combination.”