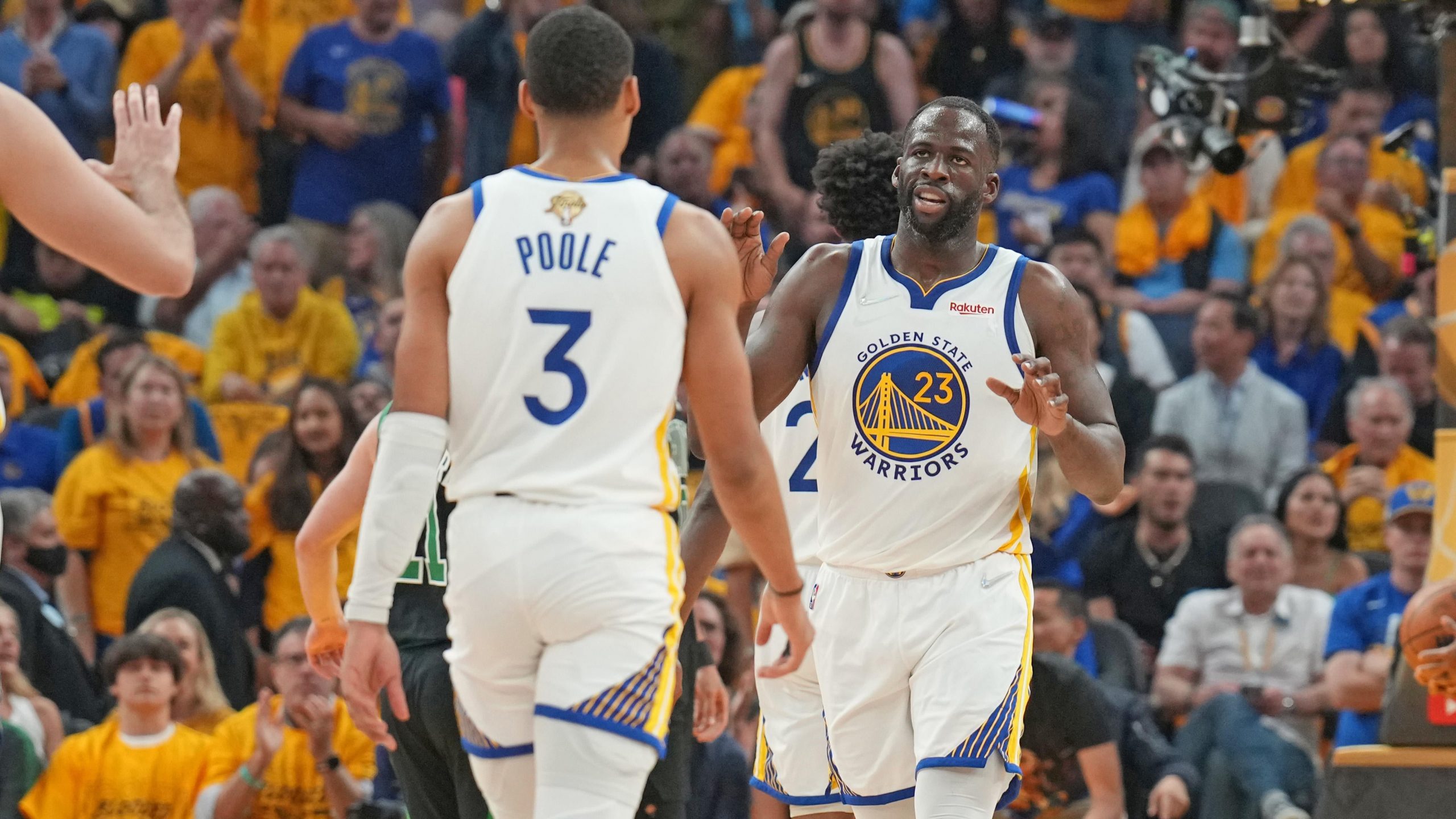 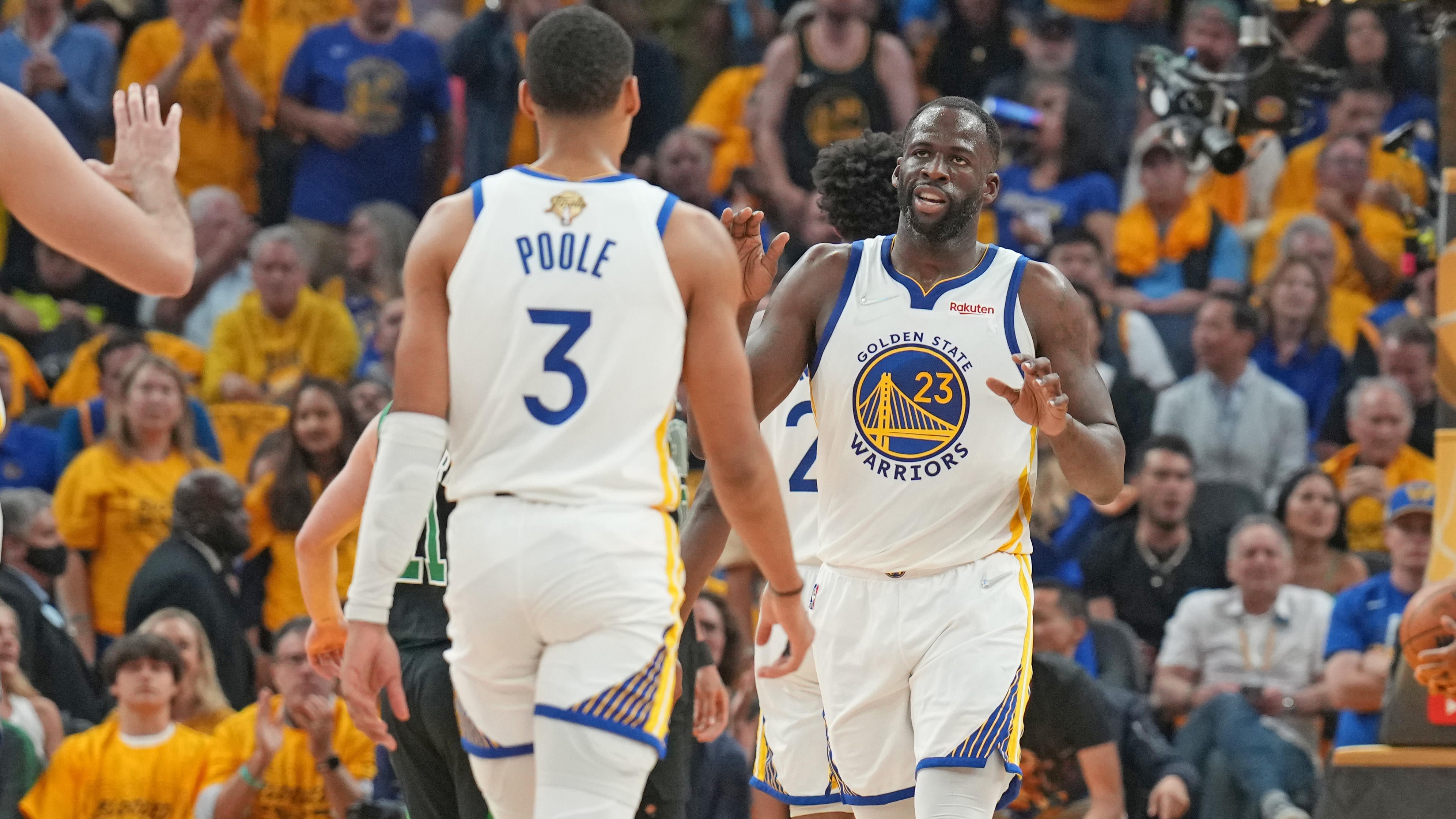 As the Warriors’ training camp approached, there was a bit of uncertainty around potential contract extensions and the back end of the rotation. For the first time in four years, though, it looked like they’d begin the season whole. At media day on Sept. 25, Draymond Green said that they’d already had “an amazing couple of days” of practice. It was “a very comforting feeling,” he said, to see “guys humming and connecting on all levels,” rather than having a championship hangover.

One could have added that quote to a long list of reasons for optimism, including but not limited to:

Two weeks removed from media day, it’s worth remembering that these reasons are still valid. It’s harder to have warm and fuzzy feelings about the Warriors, though, after Green unloaded a single punch to Poole’s face at practice last Wednesday. We’ve all seen the video yet what specifically led up to it as well as the long-term effects of it remain unclear.

Green has been away from the team since the incident, and, as of Sunday night, Golden State has not made any announcement about when that might change. Warriors coach Steve Kerr said Saturday that Green’s absence is a “mutual decision” and that “honestly, right now, there is no set date or anything like that.”

During Green’s 39-minute press conference on Saturday, a reporter asked if he expects to play in the season opener against the Los Angeles Lakers on Oct. 18. “Yeah, I expect to play,” Green said. “Now, will I play? That’s a totally different story, and that’s something that we continue to figure out as we move forward and just feel through what’s right.”

Maybe the Warriors will be humming again soon enough. In comparison to the discord they’re dealing with at the moment, though, a championship hangover would be a relatively nice problem.

Warriors believer: After Stephen Curry, Draymond Green and Klay Thompson won their first title together, the Warriors improved. They knew Steve Kerr’s offensive system, trusted it fully and carried themselves like the champions that they were. Steph, then 27, was better and bolder with his shot selection in 2015-16, his second MVP season. Dray, then 25, made his first All-Star Game and had what is still the best all-around season of his career. But that 73-win team didn’t have any guys in their early 20s breaking out; the closest thing was the development of Festus Ezeli, who was already 26 and lost his upward momentum when he had midseason knee surgery. This time, Golden State has tons of young talent — Jonathan Kuminga and Moses Moody are 20, James Wiseman is 21, Jordan Poole is still just 23  — plus there’s that defending-champion swagger. This will be a blast.

Warriors skeptic: Interesting point of comparison. Who will be the Anderson Varejao of the these Warriors then? Maybe they’ll be the team that signs Dwight Howard eventually. He actually might be a more reliable backup 5 than Wiseman at this stage.

Warriors believer: Wow, that’s ruthless. You’re taking shots at a guy who has played fewer basketball games (52) since finishing high school more than three years ago than Omri Casspi played (53) in his brief stint in the Bay. I’m including college, preseason, the G League and summer league in Wiseman’s total, by the way. Please have some empathy for this man after two knee surgeries. And have some respect for his talent! He’s moving better than he did in his rookie season, and I’m sure he’ll show that the game has slowed down for him, too.

Warriors skeptic: Speaking of ruthless, let’s discuss Green punching Jordan Poole in practice. That video footage was pretty shocking. Beyond the obvious on-court implications of the Warriors being without their best defender, best passer, emotional leader, heart and soul, on-court coach, etc. for an undetermined amount of time, it’s safe to say there are some concerns about team chemistry. You would have been better off starting this off with a comparison to the famously unhappy 2018-19 Warriors, but hey, that 2015-16 team you brought up was eventually derailed by Green getting himself suspended, too.

Warriors believer: What won’t be derailed is this discussion about the 2022-23 Warriors. On the subject of Green’s punch, I’ll defer to Bob Myers and Steph, who both said they wish it hadn’t happened but they are confident the team will get past it. Myers even said that, early on, it has been “one of the best vibes that we’ve had in my 12 years here, as far as camp and health and mental health and camaraderie.” Neither of them condoned the punch and neither will I, but I don’t think anybody’s going to be talking about this when Golden State is on a long winning streak. We all know that today’s “unfortunate situation” is often tomorrow’s catalyst for cohesion; if this team wins another title, the preseason punch will be framed just like Kerr’s scuffle with Michael Jordan.

Warriors skeptic: That’s a big if, and there’s a whole regular season to be played before the real championship chase starts. In those intervening six months, the Warriors will be under a microscope that Jordan’s Bulls, as famous as they were, can’t relate to. Everybody’s watching League Pass and, whenever Green loses his temper or gives Poole so much as a slightly perturbed look, it’ll be on social media and the players will be asked about it. No one believed anybody who downplayed Green’s argument with Kevin Durant at the time, and no one should believe anybody downplaying this punch.

Warriors believer: I mean, that team made the Finals, and if everybody was healthy — no, no, no, I said you’re not derailing this thing! We’re hard-pivoting to stuff that’s germane to this season: Wiseman’s healthy, Kuminga and Moody are going to break out, Poole is playoff-tested and Dub Nation is about to fall in love with Donte DiVincenzo. There might be some growing pains, but I’m giddy just thinking about what this team might look like after the All-Star break.

Warriors skeptic: Even you, the most starry-eyed Warriors optimist there is, had to use the word “might.” You’re hoping that the young guys will improve to the point that they’re all viable in the playoffs, and you’re hoping that Golden State won’t miss Gary Payton II, Otto Porter Jr. and Nemanja Bjelica that much. You can’t possibly be sure of any of this.

Warriors believer: Actually, I couldn’t be more confident about Moody holding up. He’s too smart and too good of a shooter not to, and he gave the Warriors some good minutes toward the end of the Dallas series. Kuminga handled himself well against Memphis and generally impressed me over the course of his rookie season, so I expect him to keep improving. I have some questions about about Wiseman, sure, but they’re more about how much he’ll stretch his game in the regular season rather than what his role will be in the playoffs. Everybody knows he’ll back up Kevon Looney and play a low-usage role: free shooters with screens and dribble-handoffs, roll hard, catch lobs, crash the glass, run the floor.

Warriors skeptic: Funny, you didn’t mention defense. Do you think Wiseman is going to help the team on that end?

Warriors believer: The guy is 7 feet tall with a 7-6 wingspan. He’s mobile for his size, and Draymond himself has shouted him out for studying film and communicating on defense. Nobody’s expecting him to be out there switching onto guards like Bam Adebayo, but yes, I think he can help. What will not help, though, is people like you honing in on every mistake he makes. The tools are there; just let him — and the other young guys — develop. As Steve Kerr said during the summer, the “foundational six” of Steph, Klay, Dray, Looney, Poole and Andrew Wiggins are back. They were the Warriors’ top six minutes-getters in the Finals and in their entire playoff run, and they’ll all play heavy minutes again this year. All the team is asking the other guys to do is fit in.

Warriors skeptic: It’s not me who put pressure on Wiseman, Kuminga and Moody. It’s the Warriors! Yes, the top six-minutes getters are all back, but No. 7 was Porter, No. 8 was Payton and No. 9 was Bjelica. Payton might be the best point-of-attack defender in the NBA, and he changed the Finals when he returned from injury. Unlike DiVincenzo, he’s comfortable switching onto bigs and being a roll man. Porter, who started in the Finals, is bigger than Moody and a far better shooter than Kuminga. Bjelica is a stretch 5 and a natural fit in Golden State’s read-and-react offense, neither of which can be said about Wiseman. The Warriors aren’t going to suck now, but they’ve made real changes to a championship-winning formula. The deeper they get in the playoffs, the more those changes will matter.

Hmmm, do you think that a super-elite shooter would work well in Golden State? How about one with good feel? One who cuts well?

Baldwin, picked No. 28 in the draft, doesn’t have to live up to all the hype he got in high school. He does, however need to prove he can hang on defense. If there’s anywhere he can make it work, it’s here.

Curry, Green and Thompson have shared the court for 10,177 minutes since the beginning of 2014-15, playoffs included, per PBPstats. In those minutes, the Warriors have scored 119.5 points per 100 possessions and allowed 104 per 100.

A couple of thoughts:

2) They barely played together in last year’s regular season. When Thompson returned on Jan. 9, Green made a ceremonial start then checked out after seven seconds and didn’t return until March 14. Green came off the bench that night and logged seven minutes with the Splash Brothers. Two nights later, Curry suffered a foot injury before the trio had logged five minutes together, and this would sideline him until the playoffs. Simply having all three available at the same time for most of 2022-23 would be a massive boost.