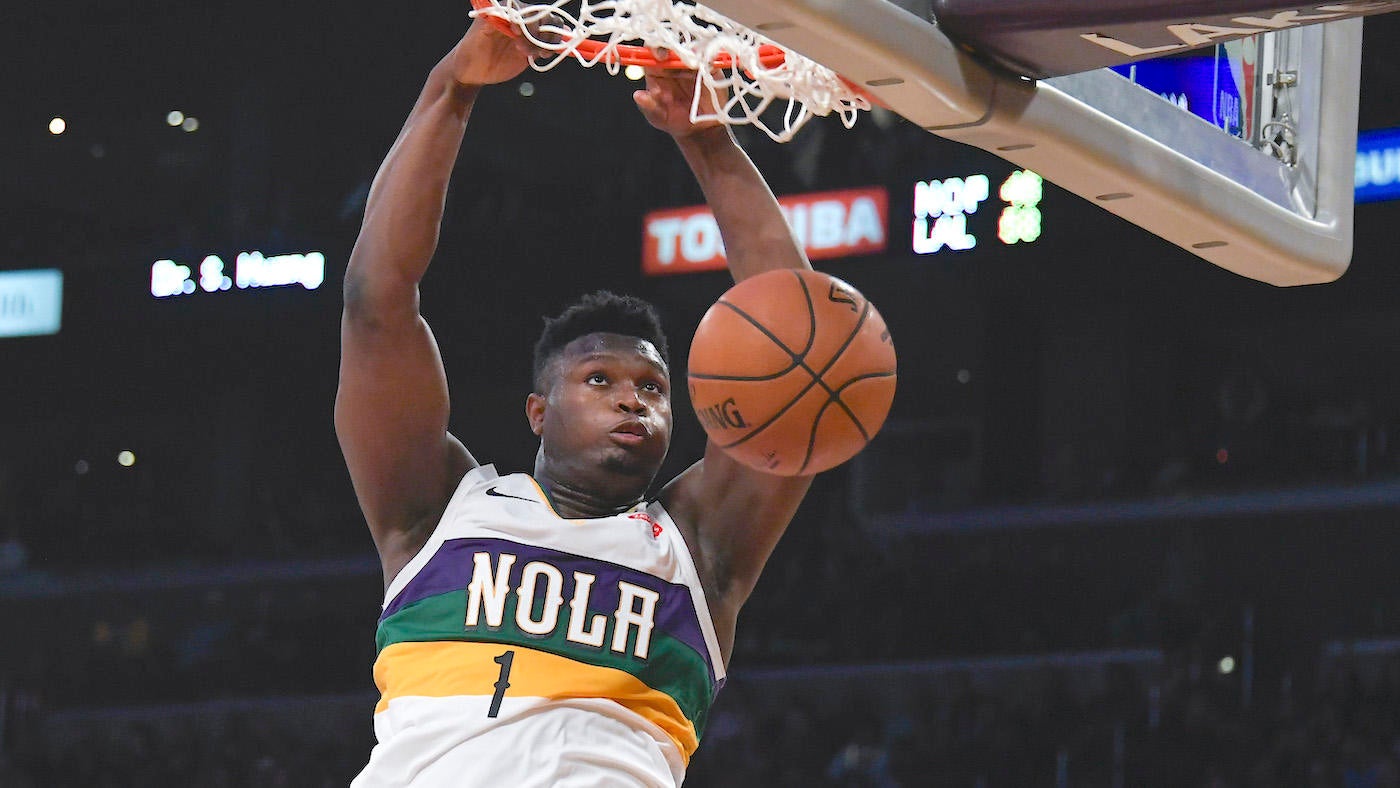 The New Orleans Pelicans lost five of their first six games last season, then Brandon Ingram hurt his hip and they lost their next seven. At 1-12 on Nov. 12, with Zion Williamson’s status something of a mystery, it looked like they were going nowhere fast.

Eleven months later, the Pelicans are clearly ascendant. Having salvaged that season, reshaped the roster and welcomed back Williamson, the question is just how high they can fly. New Orleans has the makings of an elite offense, depth at every position and all sorts of lineup possibilities. But it also has stiff competition in the West.

Everything starts with Williamson, who missed the entire 2021-22 season with a foot injury. The last time we saw him, he was an unstoppable force, averaging 27 points (20.3 of them in the paint) on 61.1 percent shooting, plus 7.2 assists. That was the year of “Point Zion,” in which then-coach Stan Van Gundy unleashed him as a downhill driver and on-ball playmaker. The spacing wasn’t ideal with Eric Bledsoe at point guard and Steven Adams at center, but this Williamson barreled his way to the basket anyway.

Now, CJ McCollum, one of the best shooters in the league, is in the Bledsoe spot, and Jonas Valanciunas has replaced Adams. Valanciunas is not the stretchiest 5 around, but he made 36.1 percent of his 3s at career-high volume last season. Williamson has yet to play a regular-season minute next to big man Larry Nance Jr., forwards Herbert Jones and Trey Murphy III or guards Jose Alvarado and Devonte’ Graham. He has yet to play a regular-season minute for coach Willie Green, either. It’s a whole new world, with more spacing and playmaking around Williamson than he’s ever had.

If the Pelicans jell offensively and are decent enough on the other end, don’t be surprised if they make another win-now move. They can trade their own first-rounders, and they still have first-round picks and swaps from the Anthony Davis and Jrue Holiday trades. They also have a logjam in the backcourt, with No. 8  pick Dyson Daniels entering the picture and 2020 first-round pick Kira Lewis Jr. soon to return from a torn ACL. There is enough youth here to justify taking things slowly, but three years ago, ahead of Williamson’s rookie season, VP David Griffin said they were prepared to be buyers at the trade deadline.

So what are reasonable expectations for New Orleans? It’s not a top-tier championship contender, but it’s closer to that than it is to another 36-win season. Provided that the stars stay healthy, anything worse than a top-five offense would be disappointing. And, even in a conference this stacked, so would a return to the play-in.

Pelicans believer: Remember when the Phoenix Suns took the league by surprise and made it all the way to the NBA Finals a couple of years ago? Remember how the whole thing seemed predictable in retrospect? I’m feeling a similar vibe from this year’s Pelicans. Their version of going 8-0 in the bubble was eliminating the Clippers in the play-in tournament and having a solid showing in the first round. Their version of getting Chris Paul was getting Zion Williamson back from injury. In fact, I believe in this analogy so strongly that I’m betting on New Orleans to win the West.

Pelicans skeptic: I love a good analogy, so it pains me to say that yours falls short. Those Suns were excellent on both ends of the floor, while the Pelicans’ best-case outcome is being an offensive juggernaut that struggles to stop anybody. That’s not a viable Finals formula, unless New Orleans magically gets reassigned to the 2018 Eastern Conference. If you really made that bet, you’re crazier than whoever came up with that creepy King Cake Baby mascot.

Pelicans believer: King Cake Baby is a delight! I’m sick of people disparaging him, and I’m already tired of people disparaging the Pels’ defense. Herb Jones would have made All-Defense last season if people were comfortable voting for a rookie. Brandon Ingram’s improvement on that end would have been a bigger story if people were paying more attention. Between Larry Nance Jr., Trey Murphy III, Dyson Daniels, Jaxson Hayes and Naji Marshall, there’s more than enough length and versatility on the bench. I even think Jose Alvarado is pretty versatile — he’s a menace on the perimeter, and his tenacity at 6-foot-nothing reminds me of Fred VanVleet.

Pelicans skeptic: All those dudes better be amazing because they’re going to be covering for CJ McCollum and Jonas Valanciunas constantly. Also, um, what about Williamson? Am I supposed to believe he’s about to go from a full-on liability to some kind of stopper?

Pelicans believer: McCollum and Valanciunas have their limitations, but it’s not like their presence ensures the Pelicans’ defense is doomed. They’ll find places to hide McCollum, and they won’t ask Valanciunas to stray far from his comfort zone. And Zion is actually one of the reasons I feel good about the defense — I haven’t forgotten all the crazy plays he made as a help defender in college, and I think he genuinely wants to be great on both ends. He’s also in the best shape of his career, so I anticipate him being a plus defender by the end of the season, if not sooner. Most young players don’t get it immediately; if they did, then Jones wouldn’t have stood out so much.

Pelicans skeptic: In what sense will Williamson be a plus defender? Do you envision him switching onto guards? Making plays in passing lanes? Protecting the rim? When he came into the league I hoped he could play some 5, but now I don’t see it.

Pelicans believer: I don’t want him switching onto Stephen Curry or hanging back in a drop like Rudy Gobert, but I think he can do a lot of things well. With his size and agility, Zion should be able to help and recover, get weakside blocks and steals, hold his ground against bigs and stay in front of wings. I think we’ll probably see him at the 5 at some point, but it’s not like the Pelicans need that to work. Nance already gives them a different look when Valanciunas is on the bench.

Pelicans skeptic: The player you’re describing is an MVP candidate, but he is not someone I’ve seen in real life. Before I start listing all the things that Williamson can theoretically do, I’d like to see him play a consistently solid, attentive brand of defense. Chasedown blocks are fun, but New Orleans just needs him to limit his mistakes. Anyway, how do you think Williamson is going to fit in on offense? He mashed the hell out of everybody a couple of years ago, and there’s more talent around him now. He’s not exactly a plug-and-play guy, though, so, while some people expect a supercharged version of the team we just saw in the playoffs, I’m a bit apprehensive. Ingram and McCollum are going to have to adjust to his presence, and this just isn’t quite the team I’d build around Point Zion.

Pelicans believer: Please remember that Zion is taking Hayes’ place in the starting lineup. The spacing should be basically the same as it was, but there will be way more rim pressure and, for Willie Green, way more options in the halfcourt. The idea behind Point Zion is not to have him bring the ball up and go to work one-on-one like D’Antoni-era James Harden. It’s to use one of the best finishers who has ever lived as an initiator, too. Like every other team in the league, New Orleans wants multiple playmakers on the court at all times. Putting Zion next to McCollum and Ingram makes them all more dangerous and makes the team harder to guard. No one should be concerned about fit; I won’t be surprised if the Pelicans have the best offense in the NBA.

Pelicans skeptic: I get that you saw McCollum on an insane hot streak last year and saw Zion pile up points in the paint the previous season. And, yeah, if McCollum and Ingram continue to make a zillion long 2s and Zion brings the Pelicans to basketball nirvana, where everybody feels involved and the whole is far greater than the sum of its parts, then you’ll look like a genius. It’s pretty obvious that New Orleans’ offense has a high ceiling. I’m not sure what it’s going to look like, though, and it’ll have to be absolutely amazing to make up for the defense.

Daniels is only 19 and his jump shot is a work in progress. But I don’t know how Green is going to keep him off the court.

If you understand how Daniels approaches the game, it’s not surprising that he has made an impression already. Green has already called him “fearless” and said his maturity is “pretty spectacular to see.”

I kind of expect Daniels to try Grand Theft Alvarado on Alvarado in practice. I want to see them both on the court with Jones, wreaking havoc defensively. And if assistant coach Fred Vinson works his magic on Daniels’ jumper, watch out.

With Williamson, Ingram and McCollum on the floor at the same time, the Pelicans’ shooters know they’re going to get open looks. This is awesome news for Murphy … or is it?

“There was a lot of help, let me just say that,” Murphy said after watching New Orleans’ first preseason game from the sideline, via Pelicans.com. “There was a lot of help. I’m very excited to get some open shots. Even though sometimes I feel like I shoot better with a contest but we’ll see. Hopefully it’s not too different.”

This quote isn’t J.R. Smith’s classic, “Open shots are boring,” but it’s a welcome addition to the I-prefer-contested-shots canon. And while some players do struggle with the pressure to knock down clean looks created by stars, there is good news for Murphy: He shot 40.9 percent on wide-open 3s last season, according to NBA.com.