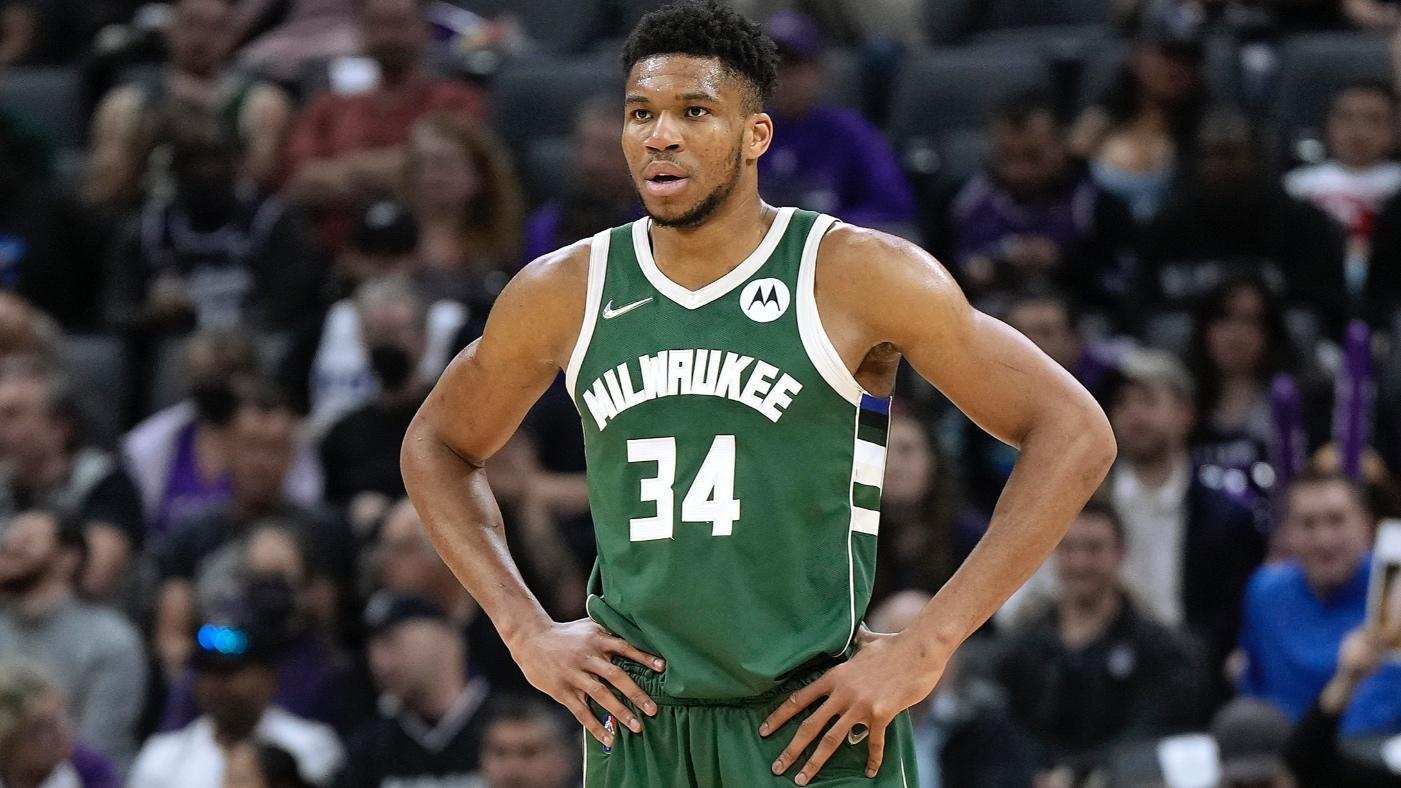 If the Milwaukee Bucks feel like they never really got to defend their title, that’s understandable. Jordan Nwora started more games (13) than Brook Lopez (11) in the regular season, and Khris Middleton sprained his MCL in the second game of the playoffs.

Without Lopez, the Bucks had the third-best offense in the NBA but never quite felt like themselves. They fell to 14th on defense, and Giannis Antetokounmpo played center for about as many minutes as he had in his previous eight seasons combined.

Without Middleton, Milwaukee almost advanced to the conference finals. It lost a double-digit lead late in the third quarter in Game 4 of its second-round series against the Boston Celtics, and it came up short when it had a chance to clinch at home in Game 6. After the Bucks’ season ended in Game 7 with their worst offensive showing of the year, Jrue Holiday said they “definitely could’ve used him.”

There were familiar themes in that series. In the Bucks’ wins, they dominated the offensive glass and feasted in transition. In their losses, they shot terribly from 3-point range. In Game 7, they continually left Celtics forward Grant Williams open on the perimeter, betting that he would either miss 3s or turn them down. Williams sank seven shots from outside, and the Bucks lost that bet in historic fashion.

Unlike prior playoff defeats, though, no existential reckoning followed. The Bucks were short on firepower without Middleton, and they’d already stamped themselves champions. You had to be pretty deep in Bucks Twitter to find serious criticism of coach Mike Budenholzer, and Gilbert Arenas is the only person still nitpicking Antetokounmpo’s game.

For all of the ways that Milwaukee evolved in its championship season, it has never so much tried to hide its flaws as it has endeavored to make up for them. The Bucks know their halfcourt offense is not nearly as pretty as the Golden State Warriors’, and they know they’re going to give up a ton of 3s. They believe that’s fine because they can dominate the paint, win the possession game, wear opponents down and make enough plays to win ugly. The frustrating part of the 2021-22 season is that they did not find out if they were right.

And so they’ll try again. The only player who left in the summer was Rayjon Tucker, who appeared in only two games for Milwaukee last season. Wesley Matthews, Pat Connaughton, Bobby Portis, Jevon Carter, Serge Ibaka and Nwora all re-signed. The Bucks’ biggest addition was unquestionably Joe Ingles, whose shooting and playmaking will help in the halfcourt, provided that he successfully returns from a torn ACL. Their second-biggest addition was No. 24 pick MarJon Beauchamp, a 21-year-old wing who gets after it on defense but shot poorly with the G League Ignite. Their third-biggest addition might be DeMarre Carroll, who joined the coaching staff.

Holiday said at media day that bringing everybody back “puts us ahead” going into the season. There are other top-tier teams that have brought back most of their key players, but Milwaukee is plainly trying to finish what it started.

Bucks believer: When it comes to the Bucks, I’m as Zen as Giannis. Did you see what he said at media day? He just wants to have as much fun as he can. He’s happy that the front office brought the band back because he knows where his teammates want the ball and who they are as people. We should all have his perspective. This is a well-constructed team with an opportunity to win a second title in three seasons. Let’s sit back and watch how everything comes together.

Bucks skeptic: I wish I could share your no-worries approach. The entire time that the Bucks have been contenders, I’ve been worried about them. Even when they won the title, it worried me — they managed to squeak past Brooklyn and erase another 0-2 deficit in the Finals, but I thought those victories would give them a false sense of security about their ugly halfcouft offense. Now I worry that Khris Middleton’s injury will do the same thing; instead of having to recalibrate in the offseason, they can just tell themselves that they would’ve won the title again at full strength.

Bucks believer: Here on a spiritual retreat in the clouds above an island in my mind, we prefer not to think about what would have happened if Middleton had remained healthy. There are no sure things in life or the NBA. You can lose an overtime game that would have put you up 3-0 in the second round, then lose three more in short succession and find yourself on summer vacation. You can, a couple of years later, win a slugfest to avoid falling down 3-0 in the second round, then rally to win the series and, eventually, a championship. You must accept this, and you must do whatever you can to give yourself a chance. The more I think about it, the more deeply I understand Giannis’ point about knowing where his teammates want the ball — that’s the Basketball Gods’ way of rewarding a team for sticking with it.

Bucks skeptic: Are you hallucinating right now? Am I? You’ve got me all frazzled because I genuinely can’t tell whether or not you’re trolling with this whatever-will-be-will-be shtick. As far as I can tell, though, all of that mumbo jumbo amounts to, “Everything is fine, the Bucks got unlucky.” I hated when they took this approach after the Raptors series, and I don’t like it any better this time.

[Unsure of whether to rant about the “Milwaukee would’ve beaten Boston with Middleton” sentiment or this season’s roster, the Bucks skeptic screams in frustration.]

Bucks believer: I can tell there’s some negative energy inside you, and it seems like it has been building up since the Celtics series. Why don’t you try releasing it?

Bucks skeptic: How did you … whatever. Listen, NOBODY likes Middleton more than me. He’s an ESSENTIAL part of this team, an AMAZING shot-maker and his two-man game with Giannis has become the Bucks’ bread and butter. But the notion that his presence would have doomed a Celtics team that played some of the best defense I’ve ever seen drives me CRAZY.

Bucks believer: OK. How did it feel to get that off your chest?

Bucks skeptic: It felt good, but I’m not finished. Middleton took over some playoff games in 2021, but there were some stinkers mixed in, too — if those switchy Nets could force him into a 6-for-23 game, then Boston surely could have. People like to imagine Middleton making the jumpers that Jrue Holiday, Grayson Allen and Bobby Portis missed, but what about the possessions he would have taken away from Giannis? Middleton wouldn’t have changed the way the Celtics guarded the Bucks, nor would he have have changed the way the Bucks guarded the Celtics. We’ve seen Milwaukee surrender wide-open 3s to Grant Williams types with Middleton on the floor, and we’ve seen the offense get super stagnant, too.

Bucks believer: Some advice: It can be freeing to surrender to the uncertainty of the universe. Maybe Milwaukee would have advanced with Middleton in the lineup, maybe he would have accidentally landed on Giannis’ foot in Game 1. We can only live in one reality. With that in mind, please share your thoughts on the present-day Bucks, as they get ready to embark on a beautiful journey together.

Bucks skeptic: Here’s a thought: I’d like this roster a lot better if it were not the present day. Brook Lopez is 34, George Hill is 36, Serge Ibaka is 33 and Wesley Matthews is about to turn 35. In their respective primes, every single one of these guys would be amazing in this system. But Matthews doesn’t get to chill until December this time around, Lopez missed most of last season with a back injury, Ibaka got DNP-CDs against Boston and Hill is coming off such a miserable, injury-riddled year that he contemplated retirement. The big offseason addition was Joe Ingles, who is 35, rehabbing a torn ACL and, before the injury, looked like he’d lost a step. It’s a shame that Ingles and the Bucks didn’t find each other a couple of years ago; he was exactly the secondary playmaker/connector they needed.

Bucks believer: When relatively young teams lose, people say it’s because they’re inexperienced. When experienced teams lose, people say they’re too old. Only one team will get to the end of the rainbow, and I’m confident you’ll come to realize that all of the Bucks’ veterans have something to offer. Competing against other elite teams is difficult enough; please don’t make them compete against their former selves, too.

Bucks skeptic: You’re definitely trolling. If the Bucks want to “get to the end of the rainbow,” then it matters that they used their midlevel exception on a defensive liability! It mattered last season that they traded Donte DiVincenzo for a vet who couldn’t crack the playoff rotation (instead of, say, Bogdan Bogdanovic). I’m not the one who expects these guys to measure up to their former selves; it’s the Bucks who have made Matthews take the same kind of defensive assignments he did in his mid-20s.

[The Bucks skeptic again screams in frustration, only louder.]

Bucks believer: Trolling? Me? Never. I sincerely urge you to open your heart to the 2022-23 Bucks, a team that is going to bring basketball fans great joy. Embrace the occasional bad shooting nights from Middleton and Holiday. Embrace the dad jokes that Giannis tells at the podium. Embrace the veterans’ knee braces, embrace Mike Budenholzer’s sideline faces, embrace the moments in which you’re completely convinced Jordan Nwora is going places. It’s all a part of the process.

I don’t want to overhype Mamu. This time last year, I watched him drop 20 and 11 in a preseason game at Barclays Center that featured zero players who went on to be in Milwaukee’s playoff rotation.

But … he had an awesome summer league …

… and an awesome EuroBasket …

… and he looks good in the preseason again.

Mamukelashvili is skilled offensively. He has clearly worked on his jumper. He’s on a two-way contract and there is no shortage of bigs on this roster … but I’m keeping an eye on him.

Holiday gave Ingles a delightful endorsement at media day, via The Athletic: “Joe is one of the ones you hate to play against. He’s an ass— playing against him, not gonna lie. He’s kinda dirty and talks trash, boy. But now that’s he on my team, I’m happy.”

Milwaukee has cycled through role-playing veterans throughout the Budenholzer era, from Nikola Mirotic, Ersan Ilyasova and Pau Gasol to Jeff Teague, Kyle Korver and Marvin Williams. But it has never had anyone quite like Ingles. Offensively, he’ll kind of be like Rodney Hood, I guess, with way more shooting gravity and an extraordinary knack for maintaining advantages that his teammates have created. He’s the best passer that Antetokounmpo has played with since the days of Greivis Vasquez and Kendall Marshall.

Ingles’ return-to-play timeline is fuzzy. He said he’s taking his rehabilitation week by week, via CBS Sports’ Jack Maloney, and Bucks general manager Jon Horst said that January is more realistic than December. Ingles had surgery on his torn ACL in February, and even before that he was having a tough season: Lower usage, worse efficiency and, most worryingly, some slippage on defense.

The risk of this signing is that the version of Ingles that would have been an incredible fit might be gone forever. In Milwaukee’s view, the reward is more than worth it.