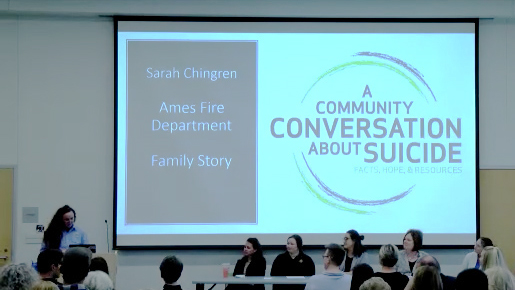 Lyndsey Fennelly spent her college years as a star basketball player for Iowa State. Now, she is an advocate and speaker for mental health.

“Many of the challenges that people face with mental health and mental illness revolve around shame and a stigma attached to an illness that people just don’t really know a lot about,” Fennelly said.

“I did not intend to deliver almost 100 talks all over the states; it’s not a badge that I was like, ‘Oh, I can’t wait to be a mental health advocate,’” Fennelly said. “I think I just saw the power of being real and telling people what I was going through, and it just kind of took off from there.”

Fennelly chooses not to disclose the details of her mental struggles or what specifically she has been diagnosed with. She feels she can relate to a larger group this way and not just people who share her same diagnosis.

Becoming an advocate has helped Fennelly in her own mental health journey, keeping her accountable for taking care of herself.

“The more public I’ve had to be and the more transparent I’ve had to live it out, it also forces me to look in the mirror and take my meds,” Fennelly said. “Not skipping because I can’t stand on stage in front of hundreds or thousands of people and then skip.”

Resiliency is an important topic to Fennelly, as she believes it takes time for someone to find what works best for them and their own mental health. She knows there is no fast solution to feeling better, and it is possible to go through multiple therapists or medications before someone finds what is right for them.

Julie Saxton, a mental health advocate, started these conversations a year and a half ago. She felt it was important to bring these topics to the community, even if they are difficult to talk about.

“It will be giving some information on what you can do to build resiliency, how to be able to change our thought process, so we can have more successful and positive outcomes,” Saxton said.

All community conversations are free and open to the public. Thursday’s event will take place at the Ames Community School District Board Room, located at 2005 24th St.