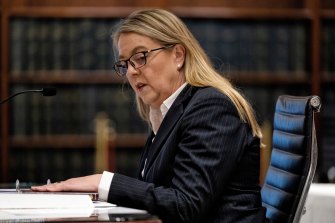 Jenny West, a former senior NSW bureaucrat at government agency Investment NSW, said she received a congratulatory text from Investment NSW chief executive Amy Brown in August last year, advising that she would be appointed the state’s senior trade and investment commissioner to the Americas.

The offer was later withdrawn and the role was given this year to former deputy premier John Barilaro. He said on June 30 that he would not take up the post but maintained he had followed the proper appointment process.

West said Brown “actively encouraged” her to apply for the role and texted her on August 12 last year to confirm she would be appointed to the post. A briefing note, signed by then-premier Gladys Berejiklian and also dated August 12, was attached to the text and noted her appointment to the role.

She said the text read “congratulations, this is one to frame” with emojis of the Statue of Liberty and a champagne bottle.

“I phoned my family to let them know the news,” West said. “By the thirteenth of the eighth I had the contract terms finalised, so one day later.”

West said Brown told her in September that the role was set to be converted to a political appointment rather than a public service appointment, and the recruitment process was halted. West’s existing role at Investment NSW was also terminated without cause.

Asked if she believed she was treated fairly, West said she was “surprised with how the process had been done”.

“I thought the process was unusual because it was a proper public sector process. I went for a job; I applied for it; I got offered the role; and then to have that role withdrawn and then to be told that it was going to be a political appointment, not a public sector appointment, I couldn’t get my head around how a process could be stopped midway, and then to be told that I’d lost my existing job, so I, to be honest, I couldn’t get my head around that.”

The recruitment process for the New York trade post restarted this year but West said she believed she couldn’t reapply for it because she had been made redundant from Investment NSW in recent months.

“I would have reapplied for the role but I couldn’t, and the reason that I couldn’t … is that people may not know that if you’ve actually been made redundant you can’t reapply for a role in the public service for nine months,” West said.

“I did not believe that I would be able to reapply for the role because it was [set to become] a political appointment and not a public sector appointment.”

West said she later learned she could apply but would have to repay a portion of her redundancy entitlements.

She agreed that a job very similar to her previous role at Investment NSW was advertised recently by the state government, but it was at a lower level.

When she learned the trade role had been given to Barilaro, she assumed it was a political appointment.

“I did accept that they would be political appointments,” West said.

Brown has said the appointment of Barilaro was made by her in accordance with the Government Sector Employment Act, and was a public sector appointment rather than a political one.

December 9, 2022
Outside review of documents seized at Mar-a-Lago officially ends

How to write a marketing plan

Walgreens sells off AmerisourceBergen stock to pay for Summit Health