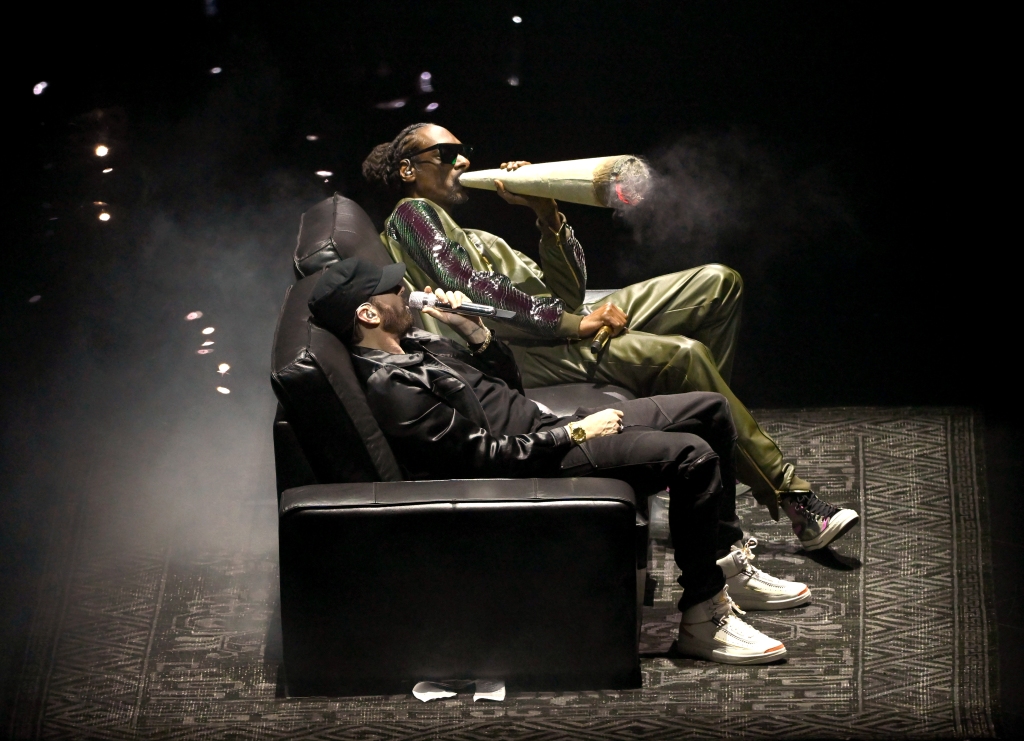 Eminem and Snoop Dogg took viewers on a voyage into the metaverse with their groundbreaking performance at the 2022 MTV Video Music Awards on Sunday evening (Aug. 28). Joining forces to reenact the music video for their recent single, “From the D 2 the LBC,” Em and Snoop wowed the packed crowd at the Prudential Center in Newark, N.J. with a visual display of the two rap vets trading verses while navigating various virtual realms.

Taking on bored ape features while traversing the cryptocurrency-powered world, the tandem morph in and out of their virtual likenesses, making for a set that’s equally innovative as it was entertaining. After waking up on a couch following an apparent hallucination, Snoop and Em proceed to rock the stage in live time. Rocking a pink fur coat and wearing shades, Snoop moves the crowd, while Em, clad in a black leather jacket, cap, and jeans, keeps the energy at a crescendo, resulting in one of the more electric moments of the awards show.

Eminem and Snoop Dogg’s VMAs performance is the second instance in which the Rap God and Tha Doggfather have shared the stage this year. In February, the two legends joined Dr. Dre for the producer’s Super Bowl Halftime Show performance at SoFi Stadium in Los Angeles, which also included appearances from Mary J. Blige, Kendrick Lamar, 50 Cent, and Anderson .Paak.

Afterward, the pair also dropped their latest collaboration, “From the D 2 the LBC,” which appears on Eminem’s Curtain Call 2 greatest hits compilation. The double-disc release, which includes previously unreleased material from the Detroit native, debuted at No. 6 on the Billboard 200 with 43,000 album-equivalent units sold in its first week. Curtain Call 2‘s debut charting position ends Em’s streak of ten-consecutive No. 1 albums and is his first to not peak atop the chart since The Slim Shady LP.

Earlier this month, Em made headlines after fueling rumors of Dr. Dre, Snoop Dogg, and himself gearing up to release a song together in the near future after posting a photo of the trio in the studio on social media. The post came days after Snoop Dogg confirmed that he and Dre were working on music together, albeit without specifying in what capacity.

“We’re cooking up a little something,” Snoop told ET Online when asked about the validity of the rumors surrounding him and Dre reuniting in the studio. “I don’t wanna talk about it too much, but we’re back together again.”

Watch Eminem and Snoop Dogg’s “From the D 2 the LBC” music video below and see their VMAs performance above.