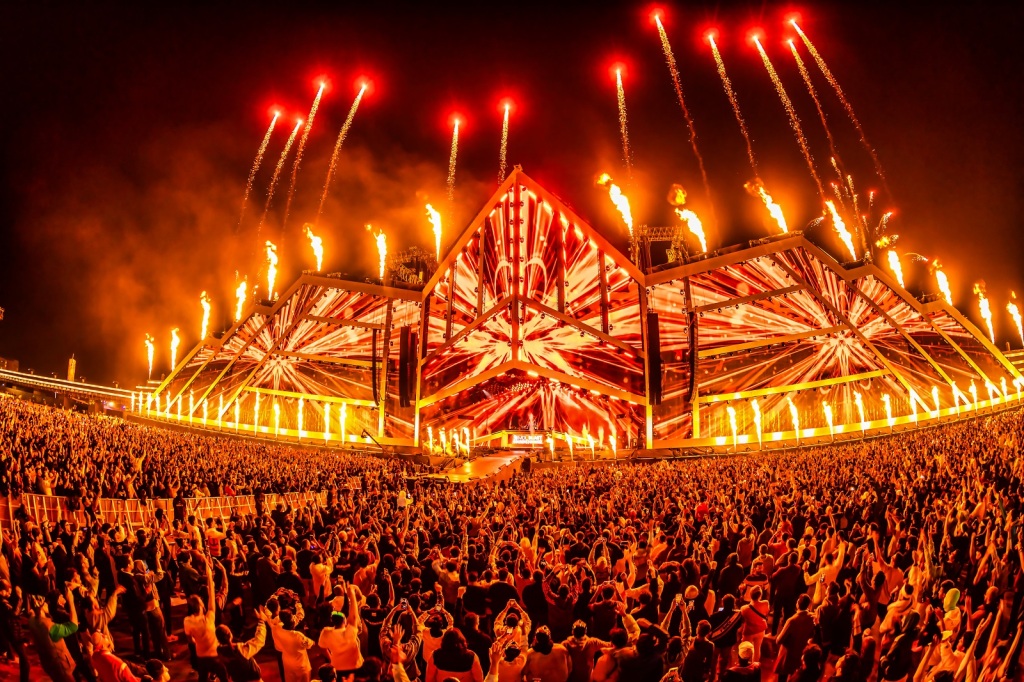 “I wanna give a shoutout,” DJ Khaled hollers to a massive crowd of over 600,000. “He’s from New York City, but he’s also from Saudi Arabia. Make some noise for the guy that made sure I came here tonight. His name is: Swizz Beatz!!” Pacing an enormous stage erected in the renovated abandoned airfield of Banban—an hour outside the Saudi Arabian capital of Riyadh—Khaled receives rapturous applause from over a half million Middle Eastern music fans. Future, Rick Ross, Busta Rhymes, T.I. and Fat Joe all made the journey to West Asia with Khaled for the third annual MDLBEAST Soundstorm music festival. Of them all, only DJ Khaled conquered a fear of flying for the 16-hour flight from Miami.

Days later, Twitter would circulate pics of Khaled alongside Mike Tyson some 600 miles away in the Islamic holy city of Mecca. The odd couple reportedly performed their religious pilgrimage together, circling the sacred cube-shaped Kaaba in Islam’s most important mosque. Born Khaled Mohammed Khaled to Palestinian immigrants in New Orleans, the Grammy-winning DJ had never before performed his Umrah journey.

But tonight, introducing a host of hip-hop luminaries to the masses of the Soundstorm crowd in the Saudi Arabian desert, DJ Khaled is in his element.

Launched in 2019 (with one Covid cancellation), the Soundstorm music fest sprawls out across seven stages, featuring local Arabic music, EDM and international acts. By far the biggest festival of its kind in the Kingdom of Saudi Arabia, this December, Soundstorm featured the likes of Post Malone, David Guetta, Jorja Smith, Rae Sremmurd, Swedish House Mafia, DJ Khaled, Bruno Mars and dozens more. Judging by the $810 billion its government intends to invest into culture, leisure and entertainment by 2032, Saudi Arabia means to rival Dubai as a luxe destination for the Western world. For now, MDLBEAST Soundstorm is a linchpin of the grand plan.

“I’m like a sponge ready to embrace and take in the local culture, food, the streets, art and the people,” music mogul Mathew Knowles told Arab News before his keynote speech at the XP Music Futures conference, a three-day-long warm-up to Soundstorm. “I want to listen to their music, talk to the talent, understand what moves the community and what impact music has on their lives and economy.”

Lebanese “Queen of Arab pop” Nancy Ajram, best-selling Egyptian pop star Amr Diab and other Arab acts brought native flavor to Soundstorm audiences. But for an international cadre of journalists covering the fest, a PR firm put together an itinerary to expose us all to the homegrown culture, food, streets, art and people of Riyadh in the hours prior to the nightly concerts.

For anyone free of jet lag, Day One visits included the mudbrick Al Masmak museum, the Souq al-Zel market and the National Museum of Saudi Arabia. This writer missed out. Come Day Two, a dune buggy caravan of 4x4s driving an hour out to the desert made for Mad Max fun in the sun. Across a terrain of sand dunes worthy of Star Wars, licensed drivers slid and skrrted safari jeeps with whiplash speed through the windswept hills. Day Three’s traditional sit-on-the-floor, eat-with-your-hands lunch at Almajlis Alkhaleeji restaurant served a smorgasbord of maqluba (lamb, rice and fried vegetables), machboos (spiced chicken and rice), samosas of spiced potatoes and flatbread. The feast followed a long elevator ride up to the 99th floor Sky Bridge at Kingdom Center for panoramic selfies with Riyadh’s sand-colored skyline as a backdrop.

MDLBEAST Soundstorm itself resembled an immense, 5.5 million square meter carnival. An elevated walkway reserved for thousands of VIP ticketholders reduced foot traffic on the ground level, a clever upgrade from Soundstorm ’21. The country notoriously prohibits all alcohol, and so the many beverage booths offer Red Bull, coffee and various mocktails. EDM DJs ruled the dance tent, with throngs of Saudi Arabians in T-shirts and jeans—ankle-length robes, headscarves and veils too—dancing as well as anyone at Coachella or SXSW.

Dressed in a head-to-toe midnight blue dress with gloves, England’s own Jorja Smith leads a call-and-response on “Digging,” a standout ballad from 2021’s Be Right Back. “Get out of my head,” she sings, a swarm of men and women responding “hey!” Female Soundstorm attendees raise lighters alongside their bfs or besties, the same as at any American music festival. But prior to the recent rise of Crown Prince Mohammed bin Salman in 2017, conservative Saudi Arabian society didn’t allow its women to drive, attend sporting events, socialize with men and a litany of other repressive, discriminatory restrictions. At Soundstorm, many women (though still dressed modestly) wear makeup, reveal some cleavage and let curly locks blow in the arid air—a step in the right direction. A few colorfully dressed, openly gay couples also saunter through the hundreds of thousands; this in a society hostile to LGBTQ expression.

Before the end of Soundstorm ’22, Busta Rhymes rocked his “Scenario” verse beside DJ Khaled; Bruno Mars led a mammoth singalong on “Just the Way You Are”; David Guetta dropped the Black Eyed Peas’ “I Gotta Feeling” after midnight; and until the wee hours, Saudi Arabians basked in a full dose of Western-style concert festival bacchanalia. If bacchanalias can be sober.