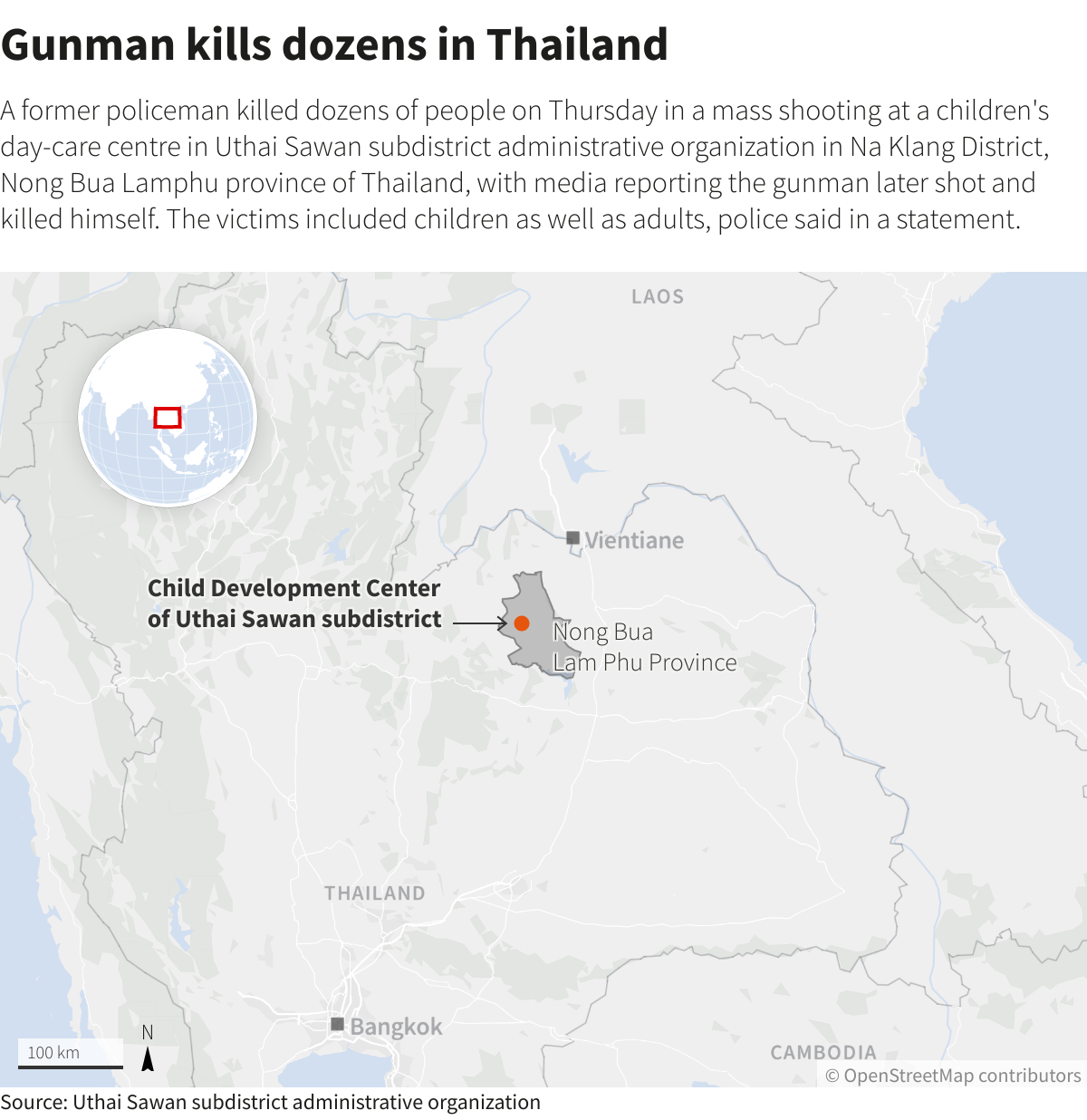 UTHAI SAWAN, Thailand, Oct 7 (Reuters) – Grief-stricken relatives sobbed and clutched toys at a children’s daycare centre on Friday, a day after a former policeman killed 34 people, most of them young children, in a knife and gun rampage there that has horrified Thailand.

Government buildings flew flags at half mast to mourn victims – 23 of them children – of the carnage in Uthai Sawan, a town 500 km (310 miles) northeast of Bangkok, the capital of the largely Buddhist country.

After leaving the daycare centre filled with dead, dying and wounded, the ex-officer went home and shot dead his wife and son before turning his weapon on himself.

Police identified the attacker as Panya Khamrap, 34, a former police sergeant who had been discharged over drug allegations and who was facing trial on a drugs charge.

It was not clear if Panya still used drugs. An autopsy report indicated he had not used them on the day of the attack, national police chief Damrongsak Kittipraphat said on Friday.

“The reasons are probably unemployment, no money, and family issues,” he said, adding that the attacker and his wife had had “longstanding problems”.

One witness, Kittisak Polprakan, said he saw the attacker calmly walking out of the daycare centre – a pink, one-storey building surrounded by a lawn and small palm trees – after the massacre “as if he was just taking a normal stroll”.

“I don’t know (why he did this), but he was under a lot of pressure,” Panya’s mother told Nation TV, citing debts her son had run up and his drug taking.

Most of the children, aged between two and five, were slashed to death, while adults were shot, police said in the aftermath of the world’s worst child death tolls in a massacre by a single killer in recent history.

Three boys and a girl who survived were being treated in hospital, police said.

The aunt of a three-year old boy who died in the slaughter held a stuffed dog and a toy tractor in her lap as she recounted how she had rushed to the scene when the news first spread.

“I came and I saw two bodies in front of the school and I immediately knew that the kid was already dead,” said Suwimon Sudfanpitak, 40, who had been looking after her nephew, Techin, while his parents worked in Bangkok.

Parents of a victim react as they gather outside the day care centre which was the scene of a mass shooting, in the town of Uthai Sawan, around 500 km northeast of Bangkok, in the province of Nong Bua Lam Phu, Thailand October 7, 2022. REUTERS/Athit Perawongmetha

Another of the dead was Kritsana Sola, a chubby-cheeked two-year-old who loved dinosaurs and football and was nicknamed “captain”. He had just got a new haircut and was proudly showing it off, said his aunt, Naliwan Duangket, 27.

In the late afternoon, relatives wailed in pain as funerals were set to be held at Wat Rat Sammakhi. Some collapsed and had to be laid on straw mats and fanned by medical workers.

Prime Minister Prayuth Chan-Ocha met victims’ families in a sweltering compound crowded with police and media, after laying flowers and observing a moment of silence in front of the centre.

The government would try its best to take care of the families and the prime minister asked everyone to “be strong to get through this great loss,” said government spokesperson Anucha Burapachaisri.

King Maha Vajiralongkorn and Queen Suthida were also due to meet the families, according to a local announcement.

Photographs taken at the centre by rescuers and provided to Reuters showed the tiny bodies of the killed laid out on blankets. Abandoned juice boxes were scattered across the floor.

“He was heading towards me and I begged him for mercy, I didn’t know what to do,” one distraught woman told ThaiPBS, fighting back tears.

“He didn’t say anything, he shot at the door while the kids were sleeping,” said another woman, becoming distraught.

About 24 children were at the centre when the attack began, fewer than usual as heavy rain had kept many people away, said district official Jidapa Boonsom.

Hundreds of people posted condolences on the Facebook page of the Uthai Sawan Child Development Centre under its last post before the massacre, an account of a visit the children made to a Buddhist temple in September.

In a message, the Vatican said Pope Francis had been deeply saddened by the “horrific attack”, which he condemned as an “act of unspeakable violence against innocent children”.

The massacre was among the worst involving children killed by one person.

In Norway in 2011, Anders Breivik killed 69 people, mostly teenagers, at a summer camp, while the death toll in other cases includes 20 children at Sandy Hook Elementary School in Newtown Connecticut in 2012, 16 at Dunblane in Scotland in 1996 and 19 at a school in Uvalde, Texas, this year.

Gun laws are strict in Thailand, but gun ownership is high compared with some Southeast Asian countries, and illegal weapons are common, with many brought in from strife-torn neighbours.