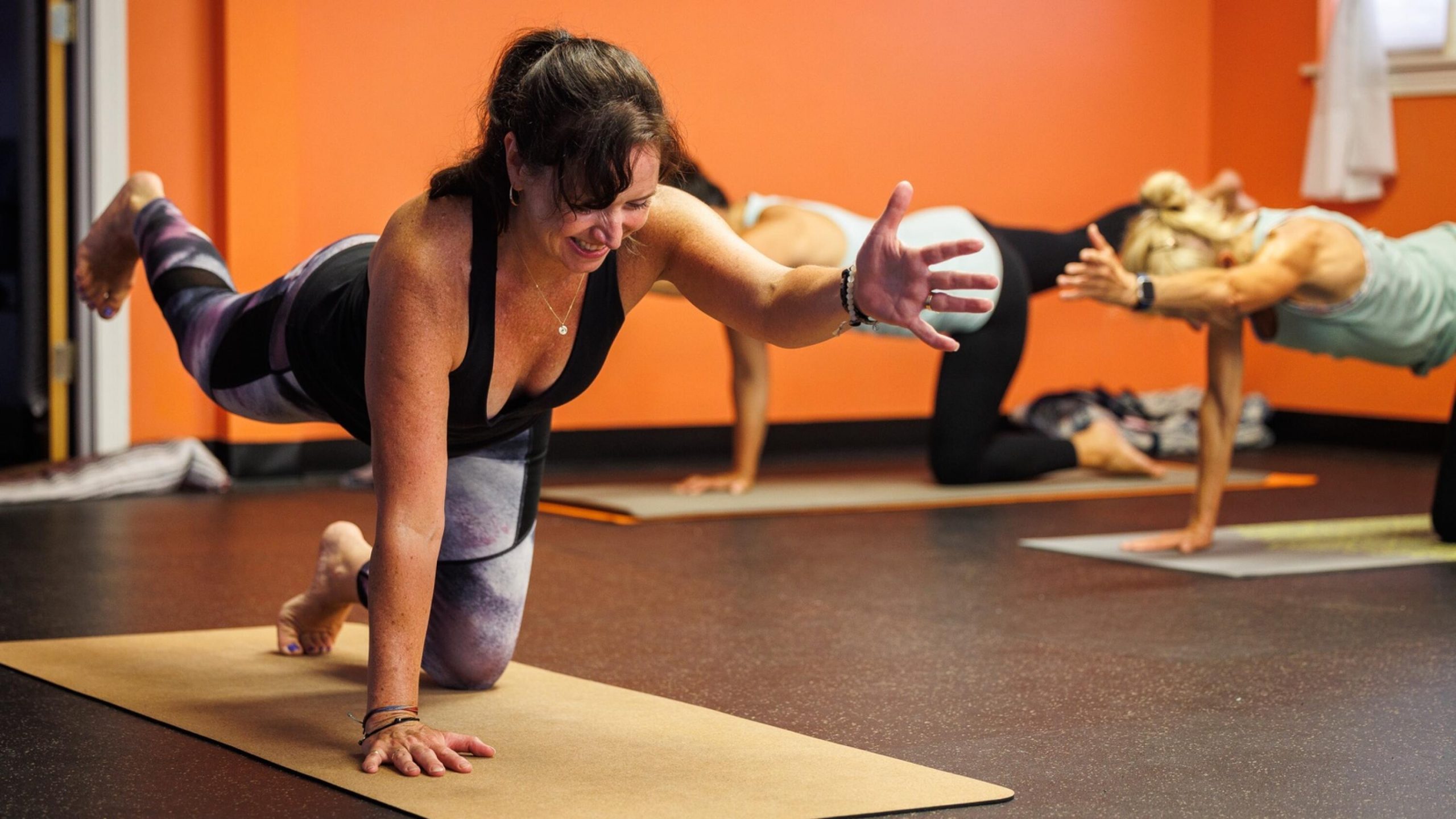 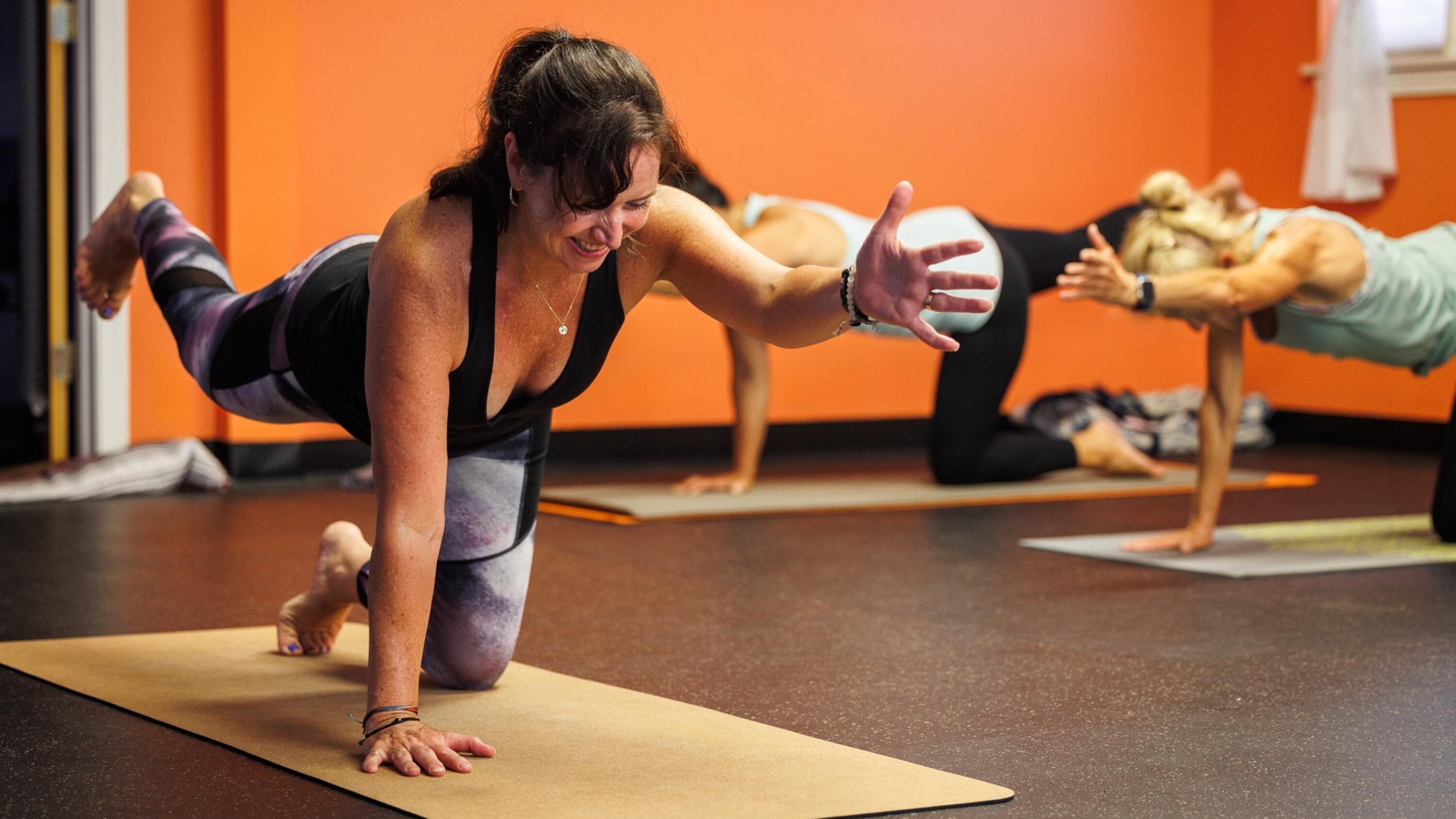 Owner and instructor at Zen and Now Wellness Studio in Niantic, Lisa Bragaw, teaches a morning yoga class on Friday, July 22, 2022. (Daniel Passapera/Special to The Day)

Lisa Bragaw, center, owner and instructor at Zen and Now Wellness Studio on Flanders Road in Niantic, smiles after teaching a yoga class on Friday, July 22, 2022. (Daniel Passapera/Special to The Day)

Lisa Bragaw, owner and instructor at Zen and Now Wellness Studio on Flanders Road in Niantic, teaches a second session of yoga on Friday, July 22, 2022. (Daniel Passapera/Special to The Day)

A silhouette of Lisa Bragaw, owner and instructor at Zen and Now Wellness Studio on Flanders Road in Niantic, is seen after she instructs a yoga class in front of a window on Friday, July 22, 2022. (Daniel Passapera/Special to The Day)

This article is part of a series that explores how southeastern Connecticut towns are allocating their American Rescue Plan Act funds.

At Zen & Now, a yoga and fitness studio in East Lyme, owner Lisa Bragaw said she went from 34 instructors before the COVID-19 pandemic to about 18 now — but she’s trying to ramp up again, and is doing more advertising than she had to do before.

Bragaw had income as a pharmacist early in the pandemic, when fitness classes were virtual on Zoom only, but said she had to use that job to subsidize Zen & Now.

She is grateful for the $5,000 grant she recently picked up from East Lyme, especially considering she didn’t qualify for a lot of other assistance, such as a Paycheck Protection Program loan. Her teachers are contractors, not employees.

Zen & Now is one of many small businesses across southeastern Connecticut that has received a grant through federal American Rescue Plan Act dollars being funneled through cities and towns. Not all municipalities are giving ARPA dollars to small businesses, but some have already cut checks, others have allocated but not yet disbursed funds, and some are in the early stages of administering a grant program.

“We’re up against sewers and air conditioners and town vehicles and all kinds of things,” said Lisa Konicki, president of the Ocean Community Chamber of Commerce, noting that getting funds meant going to town council meetings “and really telling the story of our businesses.”

In the town of Stonington, $64,000 is for small businesses, $6,000 is the administrative fee for the chamber, and the remainder is for a new event taking place this winter. Businesses have to complete their projects and submit receipts to get reimbursed.

Konicki rattled off some of the projects in the town and borough: Denison Pequotsepos Nature Center got $3,544 to replace its broken awning, Sound Waves Magazine got $2,000 to make up for lost advertising revenue, Precious Memories Preschool got $2,500 as reimbursement for cleaning supplies, Indulge Coffee & Sandwich Co. is getting $2,000 for its outdoor seating area.

As for the new event, Konicki didn’t provide details when she applied for funding and basically said, “Trust us.” She said the chamber has earned the trust and overdelivers, citing the success of the Stonington Lobster Trap Tree.

The chamber has since created a website and released details for the event: Starry Lights, a “temporary, two-state, magical holiday art installation making downtown Westerly-Pawcatuck merry and bright this holiday season.” The chamber is contracting with artists to create art installations, spanning Donahue Park and Wilcox Park for three weeks in December.

Stonington also gave $13,000 to the Greater Mystic Chamber of Commerce, which is going toward a former mail truck the chamber purchased for $14,000. Bruce Flax, who became executive director of the chamber during the pandemic, said this will be branded and used for marketing in downtown Mystic and at events. He said due to financial struggles, the chamber moved from its visitor center on Greenmanville Avenue to a second-floor space in downtown Mystic, where there is less foot traffic.

Flax said the chamber also is trying to get money for the design from Groton Town, which is reviewing applications for community projects and initiatives.

Flax also had asked Stonington for funds to pay an outstanding $8,000 police bill from the 2019 Mystic Outdoor Art Festival. He said the town opted to forgive the bill.

“We made a commitment that we would never let that happen again and we won’t. We’re a lot stronger financially right now,” Flax said. He noted the police bill for the 2021 festival was paid within 30 days.

NCDC in June announced that eight development projects will receive a combined $1.2 million, with payment upon completion of work. That includes funding to help Street Stuff with renovation costs for a new motorcycle showroom, for Ross Custom Switches to replace the roof at 45 Church St. and make the second floor usable, and to help Ganesha Hospitality open a boutique hotel at the former Elks Club on Main Street.

Other grants are going to These Guys Brewing Co., Thayer’s Marine, Antenna Salon and two development groups that are renovating the spaces at 51-53 and 54 Broadway for future retail business.

Brown said the first tranche of $2 million also includes about $125,000 to help other projects with architectural, mechanical and engineering design, so they can pass muster with building officials and be eligible for further funding. It also includes a 10% administrative fee for NCDC and Leading Edge Construction, which Brown said has been a “phenomenal” partner.

The remainder of the first tranche, and the $1.5 million for the second year, will be used to fund projects that are in the queue or new ones.

Brown said projects in the queue include a potential bakery in Taftville, a potential sandwich shop on North Main Street, the expansion of Brick & Basil Wood Fired Pizza Co. into a permanent location and making the boarded-up storefronts at 71 and 47 Franklin St. move-in ready for yet-to-be-determined retail uses.

Brown also said he anticipates opening a new application window in the fall.

Jeff Heintz, senior vice president, said the city’s assistance will help the company rapidly gear up to start production in Norwich by this fall and immediately plan for expansions. With supply chain problems, Solar Seal is placing orders for equipment now.

In New London, the City Council in April approved $20,000 for interior vent replacement at Washington Street Coffee House, $50,000 each for roof replacement at 68 State St. and 312 State St., $50,000 for HVAC and interior renovations at the Bank Street building where The Blue Duck restaurant recently opened, $50,000 for façade and roof repairs at Hot Rod Café, and more.

The City Council in May and June approved $100,000 for interior renovations to the building the Chamber of Commerce of Eastern Connecticut purchased for its new home and a startup incubator, $75,000 to support The Lighthouse Inn in reopening after a fire, and $256,000 to the Women’s Business Development Council.

Nocera said the City Council agenda for Aug. 1 includes $66,800 for a storefront buildout at 310 State St. for a fitness business owned by American Ninja Warrior finalist Samer Delgado, and $50,000 for roof repairs at New London Elks Lodge No. 360.

She said all projects require a 25% match, and business and property owners can either make a purchase and the city will reimburse 75%, or the city can pay the contractor directly.

Old Lyme and Waterford contract with outside consultants

Old Lyme used an outside consultant to administer its Economic Recovery Grant program, paying $20,000 to George Krivda. The town selected all 33 Old Lyme-based businesses and nonprofits that applied to receive grants, mostly for $10,000 but a few for less.

EZ Mini Mart owner Abdul Khan said he hasn’t gotten his $10,000 check yet but will use it to reimburse the cost of putting in a new air conditioning system last October. (It was comfortably cool there this past week, during a visit amid the heat wave.)

Getting that big expense back will help Khan with the impacts of pandemic-related inflation and supply chain issues: He said the cost to buy a gallon of milk has gone from $3.69 to $5.19.

Like Old Lyme, Waterford is paying for an outside consultant: The town is contracting with Brianna Regine for $66,000, Planning Director Abby Piersall said. Waterford set aside $300,000 for small businesses and is “in the formative stages of our program right now.”

“We know we want to do multiple rounds of funding, so we are creating a program that will have some longevity,” Piersall said. She said the plan is to launch a survey for small businesses and nonprofits next week, and share the results at a small business forum in August.

Piersall said Regine also will help business owners with the application process because, in contrast to nonprofits, some have never applied for a grant before — a point Konicki also brought up.

In East Lyme, 19 nonprofits and 10 businesses requested a total of $1.56 million, and the town awarded $461,945 to 18 nonprofits — though some only got part of their request — and three businesses. The subcommittee’s comments for the businesses not selected were either that they provided insufficient information or they already had received significant loans or grants.

Serendipthrifty owner Emily Semmelrock said she received her funding a few weeks ago and plans to use it to replace some of her racks, get more inventory and keep up with rent and utilities. She opened the shop last May, so she doesn’t have a pre-pandemic point of comparison.

Semmelrock said she heard about the program on the East Lyme Community Forum, and “it has honestly taken a huge load of stress off my shoulder, because I’m just doing this myself.”