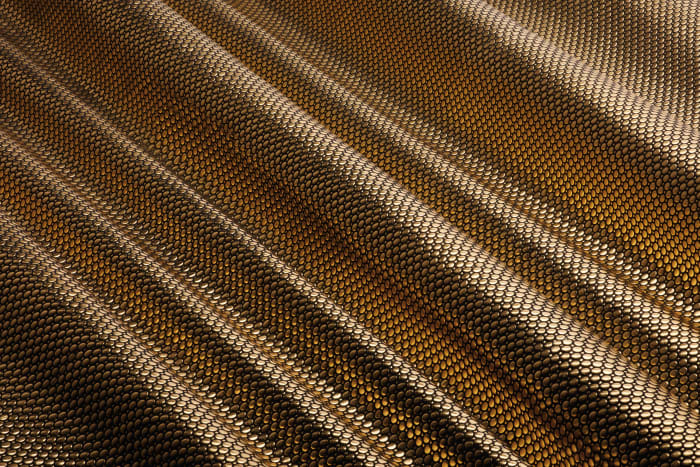 It might seem strange, but Columbia Sportswear is going to space. Well, at least some of their proprietary technology is through a partnership with Intuitive Machines. The brand, which was founded in 1938, is known for value, but specifically with its winter jackets and coats, it’s Omni-Heat Infinity technology.

What’s technology? And what is this partnership all about? Well, TheStreet spoke with the VP of Innovation at Columbia Sportswear  (COLM) – Get Free Report , Haskell Beckham to unpack all of this. And by the way, that same technology that will be on the forthcoming lander is found in jackets that are currently available right now. You may even be rocking it without knowing.

The Arena Media Brands, LLC and respective content providers may receive compensation for some links to products and services on this website.

As you can see from the photo above, Omni-Heat Infinity visually is a series of gold dots–on a jacket, it’s the inside layer. Beckham described the fabric as reflecting heat.

Expanding further with, “in our [Columbia’s] jackets and other products, it reflects your body heat. And it was originally inspired by the reflective installations that NASA has been using forever.” And on the forthcoming lander by Intuitive Machines, it will be reflecting heat to help with insulation.

Twelve years ago when Columbia originally introduced the technology as Omni- Heat Reflective and it was silver dots, now with Omni-Heat Infinity, it’s gold, with more dots that are still reflective, and it’s even more lightweight with more breathability.

Beckham expanded on the technology by stating it’s a discontinuous pattern, which “simply means it’s on a fabric in the form of dots and the space between the dots is so moisture coming off the body has direct access to the fabric,” he continued. And this is a key difference between the classic space blankets or the ones you see used after marathons.

This allows for the gear to offer breathability and allows the jackets to be worn for a longer period of time. And with Reflective vs Infinity, Columbia has been able to pack more of these dots without needing to compromise on breathability.

How it Works in Space

Now to get a little more technical, Beckham unpacked how this technology works with us humans, but also with space:

“Some metals have low thermal emissivities and they also have a high reflectivity of infrared radiation, which is the wavelength of the actual electromagnetic radiation coming off your body. Simply, another term for body heat.”

This explains how the Omni-Heat Technology works to retain body heat, but with space the technology also has the ability to reflect heat in different wavelengths. Beckham continued with that heat coming off of the sun is a different wavelength. “It’s reflecting the heat on the lander so it can insulate against the really high temperatures on the moon.”

Temperature in space on the moon can span from minus 250-degree to plus 250 degrees F. Whether the Omni-Heat Infinity technology is going to space or going in jackets and other products to keep us warm, it all goes through a variety of tests.

Beckham shared that Columbia has a laboratory on their campus in Portland in which they test products like jackets and other gear in crazy temperatures–both high and low–along with wind resistance and abrasion resistance. The latter tests the gear against moisture, vapor, and rain among many other conditions.

For testing with space conditions, Beckham worked with Intuitive Machines to find third-party testing facilities for more intense temperature conditions that the lander might be facing. And he shared that the technology did pass and got the green light.

Origins of the Partnership

And to start the partnership, Intuitive Machines reached out to Columbia Sportswear as they were looking for sponsors. Especially as they were ramping up their program which was part of the broader push to commercialize space from NASA and for the space economy. And Beckham was on the call and noted that they could provide more than just money, but rather including the technology that will be used on the lander.

Specifically, the Omni-Heat Technology will be onboard the Nova-C lander when it launches next year and represents the return to the moon. It’s part of NASA’s Artemis Program and Columbia’s tech will be protecting the vessel in the super-cold temperatures of space.

“Pushing the limits [of] our technologies and products has always been core to Columbia’s mission, so it was only natural for us to test our technology in the far reaches of space through our groundbreaking partnership with Intuitive Machines. We are thrilled that our Omni-Heat Infinity technology will play a role in this momentous return to the lunar surface, and the insights that we glean will be invaluable to our future seasons.”

That latter portion of excitement for what could be developed by Columbia for future products on earth, as well as future missions in space, is pretty neat and one that Beckham echoed as well in our conversation.

Gear With Omni-Heat You Can Wear Right Now

Ahead of the Nova-C launch in 2023, you can get gear from Columbia with Omni-Heat Technology currently. I’ve been using the Platinum Peak jacket for the past few days and it boasts a shimmery, shiny gold Omni-Heat inside.

While we haven’t been hit with absolutely frigid temperatures on the East Coast of the United States as of yet this season, it definitely warms up the body pretty quickly, but not to the point where you might end up sweating immediately. It’s also lightweight and can be packed down for easy storage–either for the season or while on the go. It also comes in a few shades.

Beyond this Platinum Peak Jacket, Columbia offers a full line of Omni-Heat Infinity products. Ranging from Jackets to parkas for both women and men, as well as shoes, hats, gloves, vests, shirts, and even pants.

And as we approach the full winter season, it’s not a bad idea to stack up on some gear that is big on the value front, but also is set to last for many seasons. Plus, as you wear it around town, next year you’ll be able to look up at the lander and know you have something in common.

Prices are accurate and items are in stock at the time of publishing.