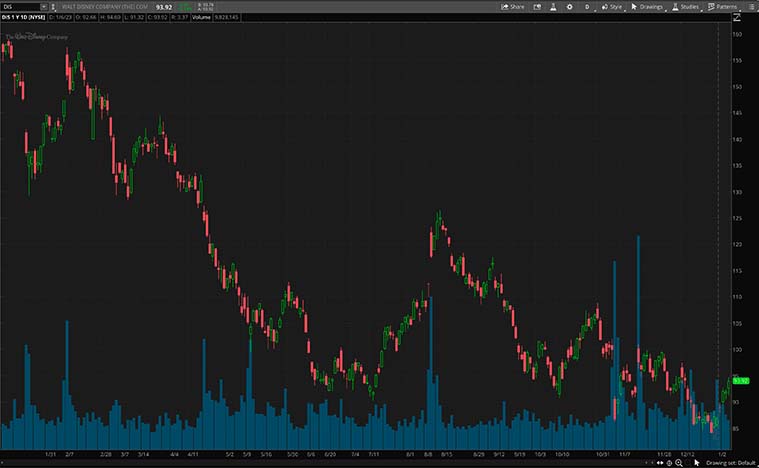 In short, entertainment stocks refer to the stocks of companies that are involved in the production and distribution of entertainment products and services. This includes a wide range of industries such as film, television, music, video games, theme parks, and live events.

Investing in entertainment stocks can be a way to tap into the popularity and profitability of these industries. The entertainment industry is often driven by consumer demand and can be influenced by trends and technological developments.

Starting off, The Walt Disney Company (DIS) is a global media and entertainment company. For starters, the company operates in various industries. This includes theme parks, film, television, and consumer products. It is known for its iconic franchises such as its animated films and Disney theme parks.

Just this month, the company announced it will hold a live audio webcast to discuss its financial results for the first quarter of 2023. This will take place on February 8, 2023, at 4:30 PM ET. Meanwhile, the results will be released after the close of trading that day.

In the last year of trading, shares of DIS stock have fallen by 40.03% as of Friday’s closing bell. Meanwhile, as we look ahead to Monday morning’s trading session, Walt Disney stock looks like it will open at around $93.89 a share.

Next, Take-Two Interactive Software Inc. (TTWO) is a video game company. In brief, the company y develops and publishes games for various platforms. This includes personal computers, consoles, and mobile devices. It is the parent company of popular game developers such as Rockstar Games and 2K Games.

Back in November, Take-Two Interactive reported its Q2 2023 financial results. Diving in, The company reported earnings of $1.22 per share and revenue of $1.4 billion, which fell short of the consensus earnings estimate of $1.37 per share on revenue of $1.5 billion. However, revenue did grow by 62.4% compared to the previous year. Additionally, the company said for Q3 2023, the company expects revenue to be between $1.43 billion and $1.48 billion.

Last but not least, Netflix Inc. (NFLX) is a streaming media company that offers a subscription-based service for the online streaming of television shows, movies, and other content, including original programming.

Last month, Netflix announced that it will release its fourth-quarter 2022 financial results and its business outlook. Specifically, the company will release these results on January 19, 2023, at around 1:00 PM PT on its investor relations website. The company will also report it will issue a press release containing a link to the financial results and a letter to shareholders on its website at that time.

Looking at the last year of trading action, shares of NFLX have fallen by 41.55%. Meanwhile, over the last 5 trading days, Netflix stock has surged by 10.39% closing this past Friday at $315.55 a share.

If you enjoyed this article and you’re interested in learning how to trade so you can have the best chance to profit consistently then you need to checkout this YouTube channel.
CLICK HERE RIGHT NOW!!