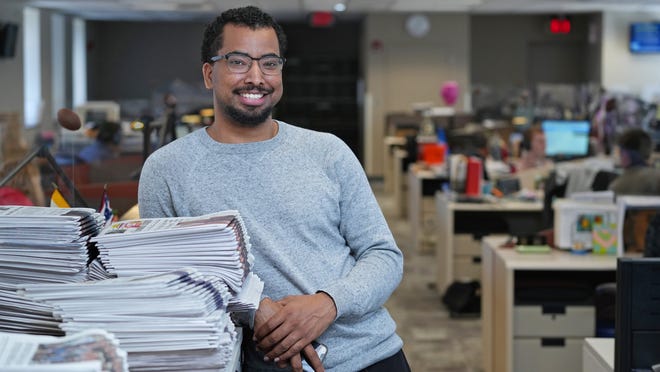 On March 31, I was walking around downtown Minneapolis on my way to dinner with a few friends.

It was the 10th day of a 12-day road trip for work, covering the Louisville women’s basketball team’s Final Four run and I was looking forward to the Old-Fashioned I was going to enjoy. In the moment, though, I was reflecting.

For me, covering the Final Four was a dream come true. I grew up in Cleveland in a family full of Browns fans, but basketball was king. Everybody played, and watching the NCAA Tournament was a family tradition. We watched as many games as we could from the first round to the family party we planned for the National Championship game.

So to cover the Final Four, it was a special feeling for a guy who knew he wanted to be a sports writer since he was in the third grade. But it was also a weird feeling. At that point, everybody close to me knew I was leaving the Louisville Courier-Journal to take a job at the Columbus Dispatch as the new features/entertainment and “things to do” reporter.

Walking to dinner that night, I was at peace with the decision.

Reporting, for me, has always been about people. Covering games is fun — it’s hard to complain about being paid to write about a football or basketball game — but I got more joy out of writing about people.

From a 3,000-word profile on Louisville women’s basketball coach Jeff Walz the day before the Final Four to Louisville’s All-ACC guard and social-media celebrity Hailey Van Lith turning into a national sensation; or the first female on-field coach for Louisville football, Ashleigh Wilkinson, and much more in between. Writing about people has been my passion and I can’t wait to do that here in Columbus.

As I mentioned, I’m a Buckeye State native. I played basketball and soccer all my life, but I was better at the latter. Unfortunately, I didn’t get the basketball skills that most of my cousins, who played in college, did.

Instead, I was a full-time student and went to Bowling Green State University. After four years in Bowling Green, I spent the first year of my career in Coshocton as a sports and news reporter.

Then I moved out of Ohio for the first time, spending more than three years in Missouri at the Columbia Tribune. There, I was a preps sports writer and moved up to covering the University of Missouri men’s basketball and football.

At that time, though, I wanted to get closer to home, so I landed at the Louisville Courier-Journal, where I was assigned to cover Louisville football. I ended up covering everything under the sun and was taken for a roller coaster ride for three years between COVID-19, scandals, protests and more, but I grew up a lot in Louisville.

Through all those stops I learned a lot about myself. I’ve turned into a foodie, which seems perfect for this job. I was always addicted to Chipotle but now there isn’t a taco place I won’t try, a good barbecue restaurant where I won’t devour wings or ribs, or a steak I’ll turn down.

Between that, my fascination with all things pop culture, movies, music, art and festivals, and I feel like I’ve landed in the perfect job.

I’d been to Columbus a lot as a kid, but visiting and living here are two different things, so I’ll lean on all of you to send me your recommendations for things to try and places to experience.

Have a favorite nightclub or concert venue? Know of a must-visit restaurant or a chef on the rise? Is there an event or activity that you think I simply must experience? Pass them along and I’ll try my best to get to them!

Life sends you down different paths, but one thing I’ve learned in my 28 — soon to be 29 — years of life, is that nothing stays the same. Life changes, interests change, what’s important to you changes, and you have to adapt.

I’ll always reflect on my time in Louisville fondly, especially that Final Four run, but I couldn’t be more excited about the chance to write about the people in the amazing city of Columbus.

I hope you’ll follow along with me on this next chapter.