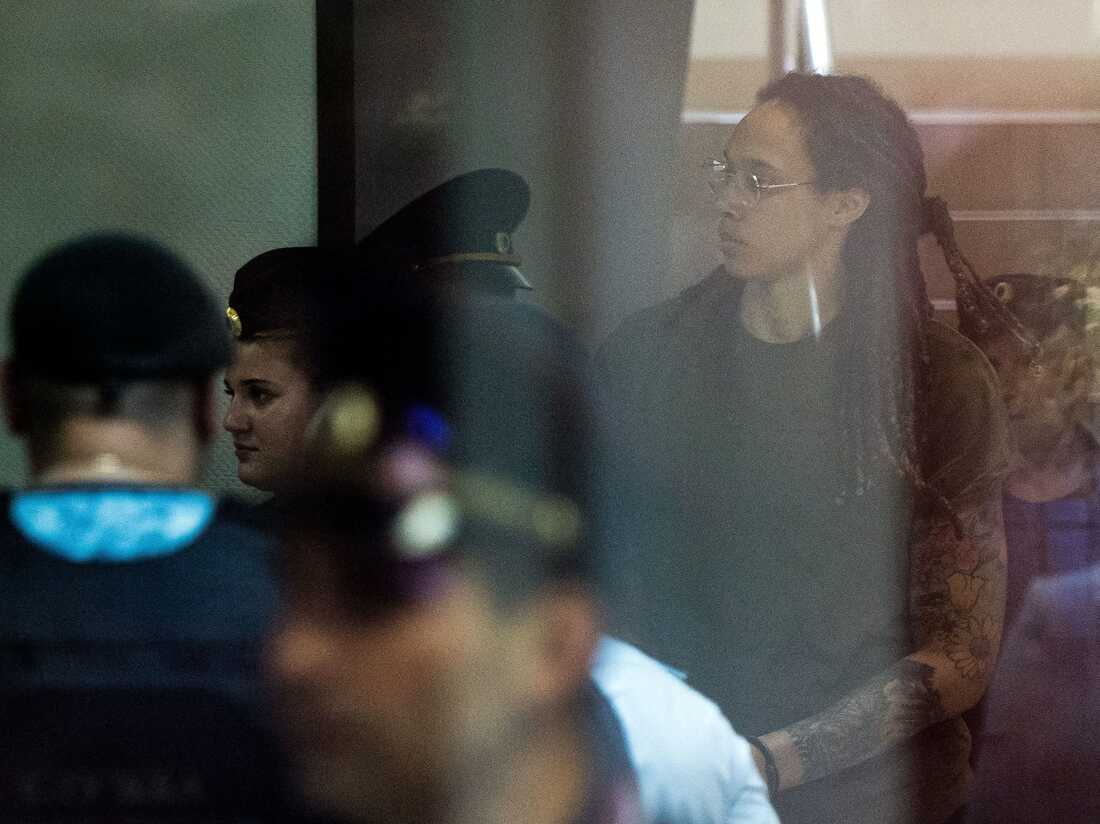 Brittney Griner is escorted to a hearing at the Khimki Court outside Moscow on Thursday for a third hearing in her trial on drug charges.

Brittney Griner is escorted to a hearing at the Khimki Court outside Moscow on Thursday for a third hearing in her trial on drug charges.

Brittney Griner’s defense argued her case in a Russian court on Thursday, one week after the WNBA star pleaded guilty to drug charges and nearly 150 days after she was first detained.

It was the third hearing in the trial of the Phoenix Mercury center and Olympic medalist, who could face up to 10 years in prison if convicted. And it comes amidst growing public pressure on the Biden administration to make a deal to secure her release.

Griner was arrested on Feb. 17 — a week before Russia invaded Ukraine — after authorities at a Moscow area airport found cannabis vape cartridges in her luggage, with prosecutors later alleging that she had purchased two cartridges containing 0.252 grams and 0.45 grams of hash oil for personal use. She was in the country to play for a Russian team during the U.S. offseason, which is common among WNBA players because of basketball’s stark gender pay gap.

The Biden administration, which officially considers Griner to be “wrongfully detained,” believes that the regime of Russian President Vladimir Putin ordered her arrest as leverage against the U.S., though the Kremlin holds that the case isn’t politically motivated.

Griner entered a guilty plea at a hearing last week, admitting to bringing cannabis into Russia but saying she had no intention of breaking any laws.

“I was in a rush packing and the cartridges accidentally ended up in my bags,” she said.

Griner’s legal team said in a statement that she chose to plead guilty to take full responsibility for her actions and hopes the judge will take that into account ahead of sentencing.

“Considering the nature of her case, the insignificant amount of the substance and BG’s personality and history of positive contributions to global and Russian sport, the defense hopes that the plea will be considered by the court as a mitigating factor and there will be no severe sentence,” they wrote.

What happened on Thursday

The defense presented three witnesses on Thursday, all of whom are involved with UMMC Yekaterinburg, the Russian team for which Griner has played since 2014.

Griner herself did not testify. That won’t happen for a couple weeks’ time.

Maksim Ryabkov, the club’s director of operations, described Griner as a “unique player” whom he had recruited to play in Russia.

“There was no one close to her level. And thanks to Brittney, we won,” he told the court.

That dominance extended to Russian success in the European leagues and helped grow the women’s game in Russia, explained Ryabkov.

“Russian fans love her as both an athlete and a personality,” said Ryabkov.

But Ryabkov and Griner’s teammate, the former WNBA player and current UMMC captain Evegeniya Belyakova, also described Griner’s accomplishments off the court — always being willing to meet with fans and support the local animal shelter.

“The fans adored her,” said Belyakova. “And everywhere we’d go, kids would surround her, and Brittney enjoyed it.”

“In all the years, I’ve worked with her, she never failed a test,” said Kalabin.

Speaking to NPR after the hearing, Belyakova said she came to testify to let Griner know how important she is to the team.

“Our team is our family,” she said. “Bad things happen to all of us and it’s very important to be with this person. We need her. She needs us. That’s it.”

She added that she wanted the court to know that Griner is a good person: “She’s just ‘good people,’ like we say in the States.”

Griner — who listened to the testimony from a locked cage in the corner of the courtroom — was clearly moved by the testimony of her friends, tearing up repeatedly. She could be overheard thanking them for coming to her defense afterward.

“That is maybe the first time in seven years I have seen her crying,” Ryabkov told NPR. “And I cannot understand how hard it is for her these recent five months. And I hope she’ll fight through it.”

Rybakov also revealed that UMMC had been actively supporting Griner’s legal defense but had pursued a conscious strategy to stay out of the media limelight.

“We’re very careful in speaking in order to escape any harm to her,” he added.

Griner’s legal team expects the trial, which began in earnest on July 1, to conclude near the beginning of August. A Russian judge has already ordered Griner detained for the length of the proceedings.

Meanwhile, the Biden administration says it’s working to bring home Griner as well as other wrongfully detained Americans in Russia and elsewhere. Those include Paul Whelan, a former U.S. Marine who was detained on espionage charges in Moscow in 2018 and later sentenced to 16 years in prison. Another Marine veteran, Trevor Reed, was released from Russia in a prisoner swap in April.

Russian officials have hinted about negotiations over a potential prisoner swap involving Griner and notorious convicted arms dealer Viktor Bout — nicknamed the “Merchant of Death” — who was arrested on terrorism charges in the U.S. in 2011 and is scheduled to be released from prison in 2029.

They have suggested that such a swap would not happen until after a verdict is delivered (for the record, fewer than 1% of defendants in Russian criminal cases are acquitted). And they’ve warned several times that the publicity surrounding her case is not helping.

Before Thursday’s hearing started, Russian Foreign Ministry spokeswoman Maria Zakharova said that Moscow is ready to work with the U.S. on “questions of exchange of citizens in custody,” but won’t tolerate any speculation or pressure.

“We call on the U.S. authorities not to speculate on this sensitive matters that touch upon the fates of certain people, and we advise to give up futile attempts to exert pressure on us,” she added. “We call on the U.S. to concentrate on practical work through established channels. It simply won’t work otherwise.”

U.S. Embassy officials attended Griner’s hearing last week and delivered a letter to her from President Biden. He was responding to one that she sent to the White House on July 4th, asking for help and writing, “I’m terrified I might be here forever.”