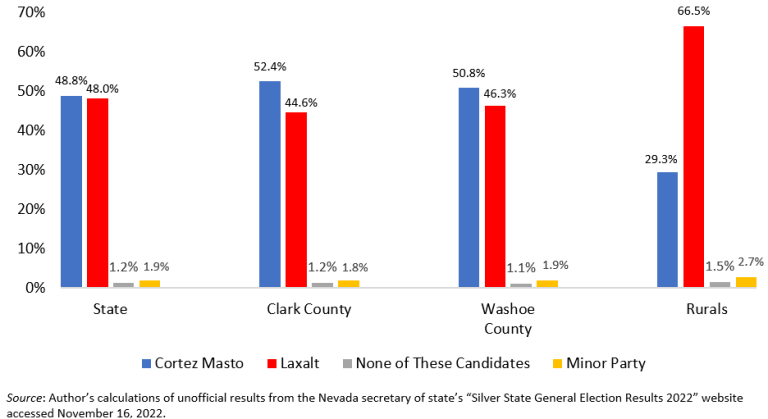 Prior to the 2020 presidential election, I coauthored Blue Metros, Red States: The Shifting Urban-Rural Divide in America’s Swing States. This book examines how socio-cultural, demographic, economic, and political differences between Democratic leaning million-plus population metros and the more Republican non-metro areas of those states shape electoral and policy outcomes in the swing states. Much of the book’s framing is informed by Nevada, and Nevada’s ‘blue metros, red states’ politics were front and center in 2022’s closely contested elections for U.S. Senate and governor. 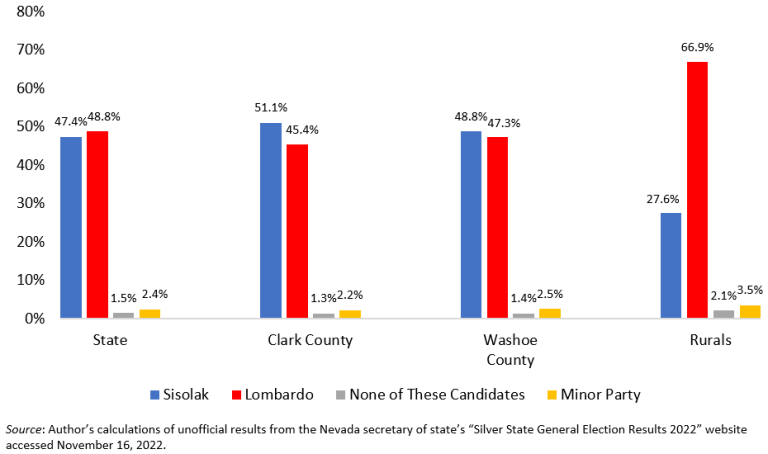 Inspection of Figures 1 and 2 indicates that Cortez Masto and Lombardo won with pluralities, as neither eclipsed 50% of the vote. Three percent of voters in the Senate race and four percent of voters in the gubernatorial contest supported either a minor party candidate or registered a vote for “none of these candidates,” a ballot option available in statewide elections in Nevada.

Because of its scale and strong Democratic margins, Clark County, home to Las Vegas, provides statewide Democratic candidates with a firewall to offset stronger Republican voting in Nevada’s other two regions—Washoe County in the north and the state’s 15 rural counties known colloquially as the Rurals.

As the figures make clear, regional voting in 2022 followed these general contours. Democrats Cortez Masto and Sisolak won Clark County by wide margins, and each carried Washoe County more narrowly. Washoe County is home to 15% of the state’s population, and it is where Reno is located. Once a Republican stronghold, Washoe County has moved towards the Democrats in recent cycles.

In contrast to voting in the state’s urban centers, Republicans Laxalt and Lombardo dominated the Rurals. Although the rural counties are home to 12% of the state’s population, these counties consistently provide Republican candidates with a large and reliable reservoir of votes. In 2022, Republican margins in the Rurals were so large that they eclipsed the Democratic advantage in Clark County.

Yet, as Table 1 details, while regional voting patterns followed historical trends in 2022, slight shifts in support in each region yielded the split partisan outcome atop the ticket. Specifically, the table reports the share of the vote delivered by each region and summarizes the state and regional raw vote and percentage point differences between Cortez Masto and Laxalt and Sisolak and Lombardo, as well as the total state and regional shifts between the races.

As is typically the case, voter turnout in Clark County lagged behind the other regions. Clark delivered only two-thirds of the total vote despite constituting over 73% of Nevada’s population. In contrast, Washoe’s contribution was four points greater than its population share and the rural counties voted two points above their population share.

Looking first at the Senate race, in Clark County, Cortez Masto’s margin was over 53,000 votes, giving her a nearly eight percentage point advantage. She also ran more than four points ahead of Laxalt in Washoe, scoring an 8,600-vote advantage, and she won more votes in the Rurals than did Sisolak.

The more than 23,000 shift in votes from Cortez Masto to Lombardo was distributed across the state. Lombardo took a larger share of the vote in the Rurals and he had a better showing in Washoe compared to Laxalt. However, it was his much stronger performance in Clark that reduced the incumbent Democratic governor’s vote total by more than two points in the county compared to Cortez Masto.

The uptick in support for Lombardo compared to Laxalt in Clark County totaled more than 14,000 votes—a telling indicator of the value that a credible Republican from Southern Nevada running high on the ticket can provide the GOP. Indeed, after weathering the pandemic, including the closure of The Strip, and four years of unified Democratic control of state government that advanced progressive priorities, many in the business community wanted partisan balance in state government. Given the macro environment, this was easier to accomplish by electing a GOP governor than trying to flip a state legislative chamber after the Democrats implemented a partisan gerrymander during redistricting.

Mixed partisan outcomes were not limited to the top of the ticket races. The incumbent Democratic attorney general and treasurer won reelection and the Democrats took the open secretary of state election. All three Democratic victors ran against poorly funded Trump-aligned candidates including a prominent election denying secretary of state candidate.

The Republicans won the least significant executive branch offices, lieutenant governor, held by a Democratic appointee,[1] and the open controller’s position. Both GOP candidates were from Southern Nevada and ran 4,000 votes ahead of Lombardo against underfunded female challengers who are also from Las Vegas.

Losses by the two Democratic and two Republican female candidates means that the 2022 midterm is the first time since 1978 that Nevada failed to elect a woman to at least one executive-branch office. This outcome is particularly notable given the saliency of abortion during the cycle, the growing gender divide between the parties, and higher female voter turnout.

Everything else on the ballot broke for the Democrats. The party held the three competitive U.S. House districts thanks to a redistricting plan that redistributed Democrats from safe NV-1, held by Dina Titus, to the swing NV-3 and NV-4 seats retained by Susie Lee and Steven Horsford. Mark Amodei, who was easily reelected to NV-2 in northern Nevada, remains the lone Republican in the state’s congressional delegation.

The Democrats also expanded their majorities in the State Assembly and Senate, which will continue to be majority female, and maintained hegemony on the Clark County Commission, by far the most important local government entity in the state.

Nevada’s blueward tilt also showed in the outcomes for the legislatively referred ballot questions. With nearly 60% support, Nevadans voted to amend their state constitution to include the most inclusive equal rights language in the country. Also passing was an amendment to establish a $12 per hour floor for the state’s minimum wage and eliminate the $11 per hour rate paid by employers providing health insurance.

The only citizen-qualified measure on the ballot was a proposed amendment to replace closed, partisan primaries with a blanket primary and implement rank choice voting for all state and federal offices except for the presidency. The measure, pushed by deep pocketed out of state reformers, faced little organized opposition and narrowly passed. However, because Nevada requires initiated amendments to win majority support in successive amendments, the measure will be on the 2024 ballot where it is likely to face significant opposition from a broad coalition of interests with strong stakes in the status quo.

By flipping Arizona and Georgia in 2022, Joe Biden won every swing state where a single metro of more than a million people constitutes more than half of a state’s population. The scale of Democratic margins in these large metros, coupled with pockets of support in smaller cities and towns, can be decisive in statewide elections. The analysis presented here exemplifies how these dynamics played out in Nevada in 2022.

Cortez Masto’s ability to outperform Sisolak in Washoe County and in the Rurals was due in part to the relationships she had developed outside of Las Vegas as an undergraduate at the University of Nevada, Reno, during a stint as chief of staff for Gov. Bob Miller, two terms as attorney general, and one term in the Senate. Her deep knowledge of the state and its interests allowed her to cut the margins in the more Republican voting regions of Nevada. Also aiding her reelection was the fact that Laxalt was the face of President Trump’s unsubstantiated claims of fraud in Clark County in 2020. Laxalt, like all of the statewide candidates who were closely associated with Trumpian politics, lost their elections.

Lombardo’s victory is in many ways a mirror image of Cortez Masto’s. Lombardo was a well-known and well-funded Southern Republican who had won Clark County twice as a candidate for sheriff. Unlike the rest of the GOP gubernatorial candidates, he was not slavishly obsequious to Donald Trump (although he did receive the former president’s endorsement and appeared at events with Trump). As a consequence, Lombardo was well positioned to cut into Sisolak’s Clark County support and deliver the GOP’s only gubernatorial gain in the cycle. In so doing, Lombardo became the rare statewide winner to lose both Clark and Washoe counties.

[1] The Democrat who was elected to the lieutenant governor’s office in 2018, resigned her position in 2021 to take a position in the Biden administration.

November 25, 2022
A guide to the Biden grandchildren as they celebrate Thanksgiving in Nantucket