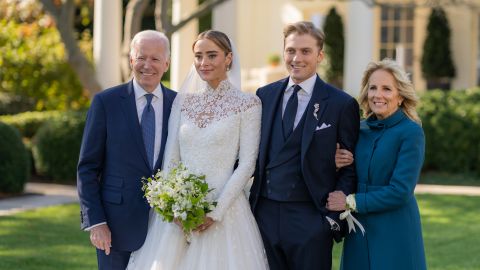 President Joe Biden is turning 80 this weekend, but the big bash at the White House is for an entirely different and more youthful occasion. Naomi Biden, Biden’s oldest granddaughter, married Peter Neal on the White House South Lawn on Saturday.

One day following the nuptials, Biden will mark his spot in American history as the only octogenarian president, a numerical milestone that shines a spotlight on a primary issue plaguing Biden with his opponents: his age. Despite a spate of recent wins – better-than-projected midterm elections for Democrats, a relatively gaffe-less trip to Egypt and Asia, and a lackluster presidential announcement from his old rival, Donald Trump – Biden cannot shake being the oldest commander-in-chief America has ever had.

But a glossy wedding of two twenty-somethings, kicking off a fresh life chapter with music and dancing and revelry, could put a youthful spin on the 80th birthday weekend. Two people familiar with the planning of the wedding say it was not a coincidence Naomi Biden’s wedding weekend coincides with the president’s day – noting the “age issue” is never something Biden wants to highlight.

“The wedding gives some cover,” says one of the people.

The wedding, which CNN is told includes the extended Biden clan on the guest list, as well as friends and family of the couple, also marks a kickoff of sorts for the tight-knit Bidens to begin earnest discussions over whether Joe Biden should run for a second term.

Shortly after the wedding, Jill Biden and Joe Biden will travel to Nantucket, Massachusetts, for the Thanksgiving holiday; Christmas follows quickly on its heels, as the clock ticks toward Biden’s need to say whether he will be in for 2024, or out. Both the president and the first lady have said they will weigh the pros and cons of a second run, something Biden has previously said he “intends” to undertake.

The wedding itself consists of three parts, a person familiar with the planning told CNN. The ceremony, which was set to begin at approximately 11:15 am ET and ended at 11:50 am, took place on the South Lawn – a location that hadn’t previously been used for a White House wedding. There was no tent, the source had confirmed earlier, which made for a chilly outdoor morning, with the temperature at 39 degrees. Guests arrived early Saturday morning to the White House complex, where they were all administered Covid-19 tests, two people familiar told CNN. They were given blankets and shawls at their seats to keep warm.

According to two people familiar with the wedding details, the bride’s parents, Hunter Biden and Kathleen Buhle, walked her down the aisle. As Naomi Biden walked down the aisle, the band played “Bitter Sweet Symphony” by The Verve. The bride wore a long-sleeved gown with a veil and train, designed by Ralph Lauren, the same sources said.

The program, which was seen by CNN, listed Naomi’s sister Finnegan James Biden as her maid of honor and her sister Roberta Mabel Biden, also known as Maisy, and Katherine Elizabeth Neal as bridesmaids. The groom’s best man was his brother Robert Eliot Neal, and groomsmen were listed as Joseph Robinette Biden IV and Charles W. Gerdts.

Peter’s father, Dr. William Neal, who was accompanied by vocalists, sang a song during the ceremony, the source said. There was also a reading of the poem “I Carry Your Heart With Me” by E.E. Cummings, which was read by Amy D’Amato.

The bride and groom wrote their own vows for the ceremony, according to the source.

“It has been a joy to watch Naomi grow, discover who she is, and carve out such an incredible life for herself,” the president and first lady said in a statement released by the White House on Saturday. “Now, we are filled with pride to see her choose Peter as her husband and we’re honored to welcome him to our family. We wish them days full of laughter and a love that grows deeper with every passing year.”

Notable attendees included former Sens. Chris Dodd of Connecticut and Ted Kaufman of Delaware, and Secretary of State Tony Blinken and his wife, Evan Ryan, who has served as White House Cabinet secretary.

Following the exchange of vows, a smaller, family-and-wedding-party-only luncheon was expected to take place in the White House, and later, in the evening, guests will return for a black-tie reception with dessert and dancing, also to be held indoors.

In a way, Naomi Biden, 28, is experiencing a White House wedding thanks in large part to her own gumption. Biden, an associate at the Washington, DC, law firm Arnold & Porter, pushed her grandfather to run the first time.

Though the patriarch, Joe Biden has always included his larger family circle, including his five oldest grandchildren when weighing life choices. His sensitivity to their feelings, and the invasive nature of a nasty political battle weigh heavy on his mind.

“I don’t think there’s been any decision, no matter how big or small, that we haven’t decided as a family,” said Naomi Biden in a video interview played at the 2020 Democratic National Convention.

Though typically called by the elder Biden family members, it was Naomi Biden who convened the most critical, in-person, all-hands-on-deck family meeting, the one that would have the most impact on Joe Biden’s future. Biden was concerned – they, however, were not.

“He thought we were calling a meeting sort of to discuss whether or not we wanted him to [run,] but really were calling it to be like, ‘Get in that race! Hurry up!’” said Naomi Biden. In the years since, it has been Naomi who has been most publicly vocal on her social media channels about Democratic issues, and championing her grandfather. On November 12, she tweeted, “Democracy wins in the Senate. Never think your vote doesn’t matter.”

Naomi is also the grandchild closest – literally – to her grandparents. She and Neal, 25, a recent University of Pennsylvania Law School graduate who works at Georgetown University Law Center on National Security, moved into the White House last August, a person familiar with the living arrangements tells CNN.

The close proximity to the couple’s wedding site has only increased their involvement in the planning. Jill Biden was primarily the person involved in the wedding planning, CNN is told, working with wedding planner Bryan Rafanelli, founder of Rafanelli Events. Rafanelli is no stranger to whipping up fantastical parties at the White House; he oversaw seven State Dinners during Barack Obama’s presidency, including the final of the administration for Italy, which included a tent with a glass ceiling on the South Lawn and a performance by Gwen Stefani.

He also planned and orchestrated the wedding of Chelsea Clinton in 2010.

A Rafanelli-produced wedding is not an inexpensive endeavor. The price tag for many of his events starts at around $300,000 and can go into the millions of dollars. “Consistent with other private events hosted by the First Family and following the traditions of previous White House wedding festivities in prior Administrations, the Biden family will be paying for the wedding activities that occur at the White House,” Jill Biden’s communications director Elizabeth Alexander told CNN.

Naomi Biden’s parents, who divorced in 2017, have each written memoirs about struggles in their relationship, many of which involved Hunter Biden’s yearslong struggle with addiction.

Neal’s family is from Jackson Hole, Wyoming, where the couple was engaged in September 2021. (The engagement ring includes the band of Neal’s grandmother’s engagement ring and was designed by a DC jeweler, a person with knowledge of its construction told CNN.)

Naomi Biden’s choice of a Ralph Lauren as the designer of her wedding dress was not a total surprise; several fashion insiders previously contacted by CNN had speculated that the job had gone to Lauren, perhaps the most iconic American fashion designer alive today. Joe Biden is partial to Lauren’s suits, having worn one on Inauguration Day, and Jill Biden has also been photographed wearing the label. In March, Naomi and her sister Finnegan, 23, and Neal, attended Ralph Lauren’s Fall 2022 fashion show in New York City, which sparked most of the chatter that she will wear the designer for at least one of her wedding looks. The White House did not comment on the dress speculation, but two people familiar told CNN the bride would wear two different wedding looks, one for the ceremony and one for the reception.

Photographs of the wedding are set to be released to the press on Saturday afternoon, at some point between the morning ceremony and the evening reception, the person familiar with the planning said. Despite several protestations from the White House Correspondents’ Association, asking that press coverage be allowed as the wedding is taking place at the people’s house, the White House was adamant that the bride and groom wanted privacy for their nuptials.

Without question, the wedding will be the social event of the White House this year, perhaps of the entire Biden administration. Floral garlands of white roses and other blooms have been hung from the Truman Balcony, and woven along the staircases down to the South Lawn; large matching wreaths and a floral arch surround the entrance to the Diplomatic Room. It is only the 19th wedding to ever take place at the White House, the last one was for Obama’s chief photographer, Pete Souza, who in 2013 was married in the Rose Garden. The last presidential daughter to celebrate a wedding at the White House was Jenna Bush in June 2008. Bush held her wedding and reception months prior at the Bush family’s Texas ranch, but her father, George W. Bush, hosted approximately 600 guests at the White House for his daughter’s second reception.

But the scope and scale of the Biden wedding most correlates with that of Luci Johnson, who held her reception in the East Room after marrying Patrick Nugent, and Lynda Johnson, who in 1967 married Charles Robb in the East Room of the White House. Tricia Nixon in June 1971 married Edward Finch Cox under a flower-laden white gazebo erected in the Rose Garden. All of these weddings were media catnip, with newspapers printing the recipes for the 6-feet tall wedding cakes.

Pieces of the Johnson daughters’ and Nixon’s cakes were sent to the Smithsonian National Museum of American History. (Nixon’s hardened to a 2-inch by 2-inch piece that now looks like a dried sponge, according to the White House Historical Association.)

No word yet on Biden’s cake flavor, or whether like the aforementioned White House weddings, guests will take home a slice as a party favor at the end of the evening.

This story has been updated with additional details.