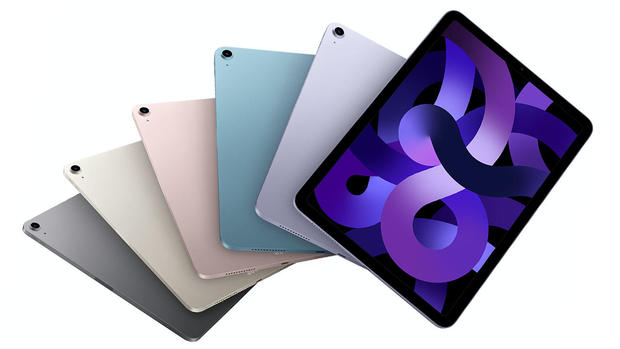 Forget the Apple Store. The best deals on Apple iPad tablets this Cyber Monday are at Walmart and Amazon.

Find these iPads at Amazon and Walmart this Cyber Monday.

The 10.2-inch iPad 9, released in 2021, is the most affordable of Apple’s iPad offerings. It offers a 8 MP wide-angle back camera, and a 12 MP ultra-wide-angle front camera. It boasts stereo speakers, too. This iPad is powered by a A13 Bionic chip. It boasts up to 10 hours of battery life, and is compatible with the Apple Pencil ($99) for drawing or note-taking.

Want to protect your new tablet investment? Get the 64 GB Apple iPad 9 bundled with a two-year subscription to Apple’s protection plan, Apple Care+. That bundle’s on sale on Amazon, too.

The latest edition in Apple’s classic iPad lineup is the iPad 10th generation. This 10.9-inch tablet features a Liquid Retina display with Apple’s True Tone technology. It has Apple’s A14 Bionic chip, an upgrade from the iPad 9’s A13 chip. The iPad 10 is compatible with Wi-Fi 6 and 5G internet for fast performance. It also offers all-day battery life, so that you can easily take it to school, work or on your holiday travels without having to worry about plugging it in mid-day.

The new iPad 10 comes in four vibrant colors: yellow, pink, blue and silver. You can also choose between 5G cellular and WiFi-only models. The iPad 10 starts at $449.

The latest iPad Pro comes with several major upgrades. One of the most notable changes is that the 2022 iPad Pros are equipped with the M2 chip, the same fast and powerful chip included in the latest MacBooks. The M2 chip makes this the fastest iPad yet — and an excellent choice for video editing, streaming or gaming.

Apple made some improvements to the writing and drawing experience on the new iPad Pros as well. When used with the Apple Pencil 2, the iPad Pro provides a more effortless experience. The Apple Pencil can now be detected up to 12 mm above the iPad Pro display, which allows users to draw with more precision and preview marks before they make them. It also makes it more efficient for the iPad to register handwriting and convert it to text with the Scribble app.

The new 11-inch iPad Pro comes in silver and space gray. It starts at $739. Pricing increases based on storage and connectivity selections.

Want a bigger screen? No problem. Apple also released a 12.9-inch model of the new iPad Pro. The larger model includes all of the same updates as the 11-inch iPad Pro, including the M2 chip.

The 12.9-inch iPad Pro comes in silver and space gray. You can choose from four storage options and can select either the cellular or Wi-Fi connectivity options.

Walmart is rolling back the price of the 4.8-star-rated Apple iPad Air 5 for Cyber Monday.

Introduced in 2022, the 10.9-inch Apple iPad Air 5 is the latest in the lightweight iPad Air line. The iPad Air 5 offers performance up to 60% faster than the prior model, thanks to Apple’s turbo-charged M1 chip. The device boasts a 12 MP wide-angle back camera that supports 4K video. It also offers touch ID, and Apple’s Liquid Retina display.

The iPad Mini 6 is a compact tablet with an 8.3-inch Liquid Retina display screen. Released in 2021, the Apple tablet is powered by an A15 Bionic chip. It features a 12 MP wide-angle back camera, and a 12 MP ultra-wide-angle front camera. It boasts landscape stereo speakers. Available in four colors.

Note that the Apple iPad Mini is not compatible with Apple’s external Magic Keyboard. It can, however, be used with other Bluetooth-enabled external keyboards.

Amazon also has a good deal on the Wi-Fi and cellular model with 64 GB of storage. Choose from four colors.

These beloved Apple AirPods are great holiday gifts — they’re one of the best stocking stuffers to give this Christmas. Check out the brand new AirPods Pro 2, now on discount at Amazon, or save big on the other top-rated models.

The latest Apple AirPods Pro 2 earbuds offer 30 hours of listening time with the included charging case. They have an upgraded wireless chip for improved audio functionality, a new low distortion driver for clearer audio and improved active noise cancellation. The Apple AirPods Pro 2 provide truly custom sound: You can use your iPhone’s camera to analyze your unique ear anatomy and find the perfect audio settings for you.

The design of the AirPods Pro 2 is fairly similar to the previous generation, but Apple has introduced touch control to the AirPods Pro 2 to help users more seamlessly control their AirPods. Users will also get a new extra-small tip with their AirPods. The case did get a notable design upgrade with a new lanyard loop and a built-in speaker to help track the location of your AirPods case.

Just about anyone will love these budget-minded Apple AirPods. They’re not the latest model, but they’re still one of the most sought-after earbud models on the market.

Retailing for $159 at Apple, they’re on sale at Walmart for $79. These AirPods boast more than 24 hours total listening time (with the wireless charging case), a foolproof, one-tap setup for Apple device owners and a low-latency wireless connection (for full immersion when consuming movies and music).

Apple AirPods Max use active noise-cancellation technology to block out unwanted noise and feature a transparency mode so you can hear what you need to. These headphones feature 20 hours of listening. They come in a variety of colors including blue, green, red and silver. They’re also compatible with Siri.

A new laptop makes quite an impressive holiday gift. If you want to splurge on a new MacBook, consider these highly-rated options this Cyber Monday.

This is one of the best deals you’re going to be able to find on a MacBook this weekend. As part of the Amazon Black Friday sale, the 2020 MacBook Air with the M1 chip is only $799. This lightweight MacBook features Retina display, an impressive 18-hour battery life and fast performance. There is a 2022 edition out, so this is a slightly older model — however, it is unbeatable deal for a new MacBook.

A step up from the MacBook Air, the slightly weightier (three pounds) 14-inch MacBook Pro boasts a powerful active cooling system, which helps keep the 8-core CPU running fast. It delivers up to 21 hours of battery life on a single charge, and features a Retina display that’s brighter than the MacBook Air.

With its size and more powerful guts, the 16-inch MacBook Pro is aimed at professionals who need a seriously powerful laptop for graphics-intensive applications, such as video-rendering and design. Just keep in mind, this is a machine that comes with a professional-level price tag.

Save on the new-for-2022 Apple MacBook Air at Amazon. The laptop features a 13.6-inch Retina display, 8GB of RAM, 256GB of storage and a backlit keyboard. Designed for portability, it weighs just 2.7 pounds and lasts for up to 18 hours on a single charge thanks to the Apple M2 chip.

These deals may not last through the holidays, so shop now.

Your friend or family member who is constantly losing their keys, wallet or Apple AirPods could really use some Apple AirTags this Christmas. These tiny trackers work by sending out a Bluetooth signal that can be anonymously detected by nearby devices. Then, even if your own phone isn’t handy, you (and only you) can locate these trackers on an Apple “Find My” map.

If your iPhone is handy, then it can lead you straight to the AirTag via the phone’s “Precision Finding” feature (found on the Apple iPhone 11 and newer models).

Apple AirTags are water-resistant, and designed to last for up to one year on a standard, replaceable battery.

You’ll get the best per-AirTag price when you buy a four pack. But if you only need one, single Apple AirTags are available at Amazon.

This year, give the gift of extended iPhone battery life. The Apple MagSafe Battery Pack magnetically attaches to your iPhone (iPhone 12 models and newer), providing a portable, wireless phone charge. If need be, your MagSafe Battery Pack and iPhone can be charged at the same time.

As always, check back to CBS Essentials for holiday gift guides for every special someone in your life. Check back for more throughout the season.

February 5, 2023
US downs Chinese balloon, a flashpoint in US-China tensions – The Associated Press