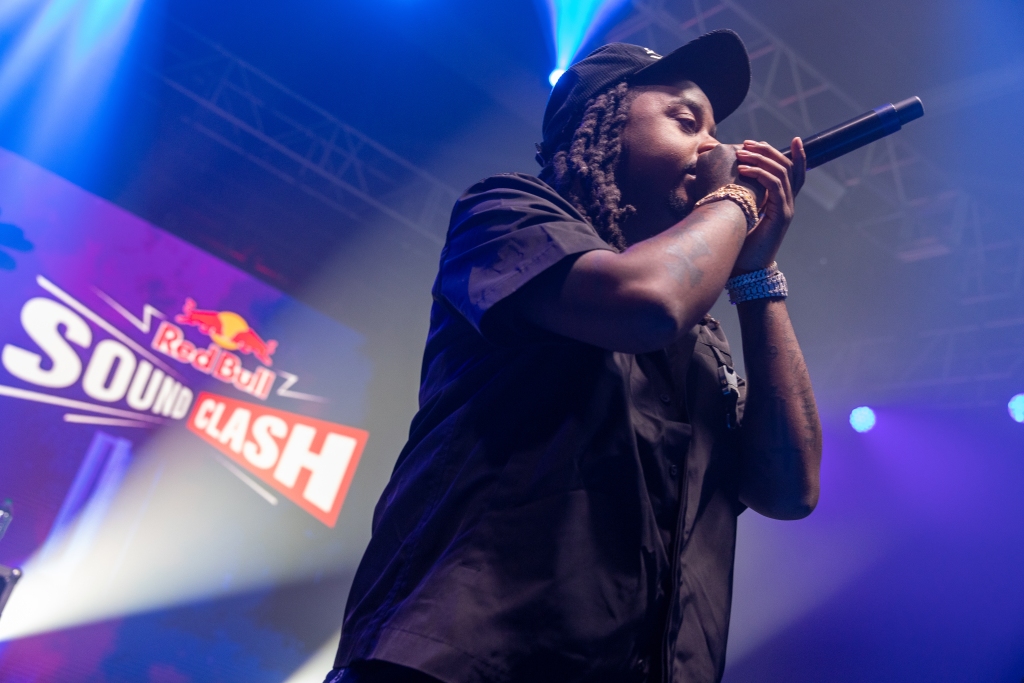 Sitting calmly and confidently in the greenroom of the Russell Industrial Center (a former warehouse turned live event venue), Babyface Ray is relaxed behind the scenes during the Red Bull Soundclash in his hometown of Detroit. Prepared to engage in a friendly on-stage battle against his Bay area contemporary Larry June, the midwest native reflects on his career journey.

“The sh*t that he streaming, that’s my real life that I’m going through,” the 31-year-old rapper smiles as he speaks about being featured on the now annual Hov’s Memorial Day Playlist, not once but three times. “I’m on tour, but I’m looking like, ‘what the f**k, man?’ They like, ‘This is Jay-Z personal playlist…’ it’s a beautiful thing.”

Speaking with distinction, Babyface Ray recalls how he steadily built his career from the burgeoning Detroit rap scene to international stages. Starting his journey in music nearly a decade ago with Team Eastside, he has evolved with his city in real-time.

While Detroit is famous for the soulful sound of Motown, the gritty, narrative-fueled street raps from the likes of Babyface Ray, Baby Money, Icewear Vezzo, 42 Dugg, and more, stay true to the passionate plight of the midwest.

VIBE spoke to Babyface Ray about Detroit rap essentials, his career journey, and more. Read the conversation below.

VIBE: Who are some essential Detroit musicians?

Babyface Ray: I always say the Detroit rap scene back in the day, before we was getting acknowledgment. The Rock Bottoms, the Street Lord’z, Eastside Chedda Boyz, that’s the essential stuff that I can go back home…that kind of powered us.

How do you feel about the expansion [of Detroit rap], and how does that kind of play into your personal story as an artist?

We’ve been doing it for so long. It feel good that we’re here in this moment, that we getting regular spins and regular spots. It’s a beautiful thing. I remember when it didn’t used to be like that. So for it to be happening, you feel good, for sure.

I think Detroit artists, we kind of earned our own reality. Everybody from Detroit, it don’t matter who it is, if they doing music, they’re going to tell you about something that they got going on [that is] real. Detroit kind of one of them places where everybody just really real. They’re being themself, so I don’t know.

Were you ever hesitant to put yourself out there when you first started doing music?

When I first started I was rapping like Lil Wayne, you know, metaphors and stuff like that. And then as I grew…and then some of the guys that I looked up to wasn’t musicians. Then it kind of transitioned to watching the rap guys tell stories about the shit they was doing. So it was like, I had to do sh*t to get my story. It was kind of building up. It was crazy, for real.

What do you think is one of the biggest things that you had to overcome to get where you are now?

I just had to get the fear from in front of me and just step out. You know what I’m saying? I don’t know, just stop being so…holding back. Because at first, it would be like, “Man, they ain’t going to f**k with this.” And it’s like, “I don’t want to.” I had to get that out of the way and just start doing me, and then it all came together.

When you say the fear, where does that come from or what does that mean? Is it a fear like, ‘I made it, now what?’ Or fear like, ‘I’m not going to make it. Now what?‘

The fear came from just watching the music scene. You know what I’m saying? There was no one in there that was like us period, so maybe they don’t want this. And then once they finally gravitated to us, it was like, “Oh okay. We weren’t doing nothing wrong. They just didn’t hear us.”

What do you do specifically to make sure that people hear you?

Moving around, touching different people, different places. So once you connect with different people, and they might not even know your music, but once they take a liking to your character and who you are, they’re going to check you out and it spread kind of like that.

Going forward, as you continue to elevate, what are some other sounds and styles that you would like to incorporate in your music?

I ain’t going to lie. Lately, I got this image in my head where I was watching the Kanye [West] documentary, and his very beginning when he was doing music, he had incorporated a choir into the music. And I grew up in church, my Dad was a reverend. So I want to start incorporating a choir a little bit in there. Just different stuff when I revisit the song and go back at it.

Any people that you want to work with? You’ve got a lot of collabs under your belt.

Man, anybody who do good music for real.  But at the same time, I’m one of them cats, if you do good music and I know we won’t mesh well, I just like your music too. But it’d be more producers more than anything, for real. I keep saying Pharrell Williams.

Didn’t you rap about not doing features with just everyone?

For sure. It’d be like that though because everybody thinks…they be trying to tie music in with friendship. You ain’t doing music with this guy, that ain’t your friend. And I could literally be a fan of you. But it be like, “Man, we ain’t on the same accord right now so it’s like I don’t really need to see you.” And then they’ll take it as, “Oh, that’s my opp. He don’t want to do music with me.” So I guess sometimes it go like that.

You haven’t had that huge big cosign outside of Jay. You just did it straight up. The one thing I did want to mention though, how has videos changed things for you?

The videos helped me a lot. It be kind of tricky sometimes because…this just happened on our last CD. We’ll have a treatment video where we pay all this money, and I’ll do something at a lower budget and it’ll go past it. Now, I’m trying to be more hands-on with the director to try to paint my picture. The videos definitely helped, for sure.

And I was talking to my homeboy like, shout-out to Baby Keem because Baby Keem one of the guys, nobody knew who he was too. And then when we finally get up on and you watch his visuals, it’s like, ‘Man, who the hell is this?’ It plays a major part.

We was in Houston, we went to this Spotify thing, and the lady was in there going. She was speaking, [and] said, “You all, can keep shooting these little pellets, or you all can build up and drop bombs.” And I took that and I’m like, “Man, she is right.” It hit harder when you put [in] more time.