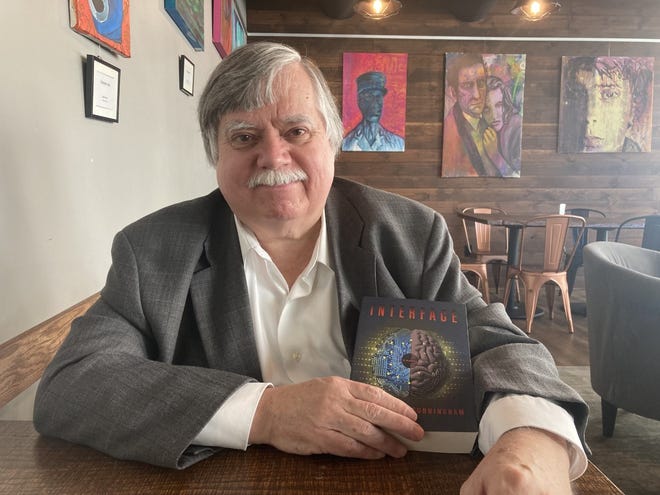 Chicago native Scott Britz-Cunningham moved to Worcester several years ago to research nuclear medicine at UMass Memorial Medical Center, but he doesn’t stop working when he goes home at night. Britz-Cunningham has written three scientific thriller novels in the past 10 years, the newest of which, “Interface,” comes out in early November. Last Call sat down with Britz-Cunningham to hear about the inspirations behind “Interface,” the balance between medical work and writing, and his adopted home city.

Can you tell us about “Interface”?

I got a little exasperated when I was in a restaurant and saw this couple sitting together. They had ordered a nice dinner and they looked like a nice couple, but they were sitting there just glued to their cell phones, not even speaking to each other. I got to thinking this technology that we have is changing us. It’s changing the way we interact, it’s changing our relationships, our society, our politics and everything. I decided to write a book about it. What I did was I took it to an extreme to show what might be happening in the future if this trend continues without anything to throw it back. I envisioned a world where people ditched all the cell phones and now have an implant directly in their brain so they’re connected to each other 24/7. You can’t turn it off, you can’t really escape it. What would happen if society were like that?

The creator of these implants, for reasons which the book explains, because of the trauma he underwent, he turns against his own invention. He wants to rid the world of it, however, it’s extremely popular. Nobody wants to get rid of these because they love them. He has to figure out a way to make them get rid of the implants, and so he comes up with a way to scare everybody so badly that they will get rid of the implants. What he does is he discovers a digital virus and he can transmit signals through the interface and infect people with this virus, which will lead to insanity and death within a couple days.

How did current technology inspire the book?

The efficiency of [the implants] would be extremely high, but so are the costs, because you can never get away from it. A lot of things are run by popularity rather than by a knowledge of the law. I already see the beginnings of that now, with the social media. You put up a message that offends somebody or gets somebody excited about something, and thousands of people you never met will suddenly gang up on you and flood you with all kinds of messages. I have an instance in the book where somebody was personally subjected to that and is devastated by what happened. I think it’s already reached the point where it’s starting to cause some harm and change the way things are.

What’s your own personal experience with social media and the issues you write about in “Interface”?

My experience is that I’ve stayed away from it. I did set up a Facebook account 10 years ago when a publisher suggested that I do that, but I never really used it. I didn’t have the time to do anything on it. Eventually they locked me out for inactivity. I’d rather just close it. I don’t use any social media at all. I do texting, I do emailing, and I have a website of my own. Apart from that, I don’t use it. I’m old-fashioned and I prefer books to TV. I prefer thinking and writing rather than messaging people about what I ate for breakfast or what my dog did today.

Can you talk about what you do at UMass Memorial?

I do nuclear medicine. It’s a branch of medicine that looks at the function of different parts of the body. You have radiology, which looks at the structure of everything, and nuclear medicine really looks at the function. We’ll inject something radioactive into the body and look at how the heart beats and how the blood flows within the heart. We inject small amounts of radioactive compounds directly into a person’s bloodstream and we take a picture of where those compounds go in the body and infer a lot from that. Even in medicine, it’s not a very well-understood field. We have a nickname sometimes, they call it “unclear medicine,” but nonetheless, we know what we’re looking at.

How do you incorporate your medical knowledge into your books?

The books all have a scientific, medical background. There’s three of them, and they’re all pretty much in the same genre. In fact, to me, they’re like a trilogy. The first one is about artificial intelligence, the second one is about gene therapy for longevity, and they’re thrillers just like this one. They all have this scientific background. My work actually contributes a great deal to that. The first book, “Code White,” the hospital I describe is in Chicago, where I grew up, but it’s very much like Brigham and Women’s Hospital, where I worked. If you know Brigham, you’ll recognize certain things in scenes.

Can you talk about your previous two books?

[My first book is] called “Code White,” and it’s about a new treatment where they implant a computer in this boy’s brain. He is blind because of a tumor he had, and they replace part of his brain with this implant. While this is going on, there’s a bomb threat in the hospital, and that’s where the title comes from. When I was at Brigham and Women’s, “code white” was the security announcement for a bomb threat. The whole thing is based on this bomb threat that appears to be trying to disrupt a groundbreaking operation on this kid.

The second book, “The Immortalist,” is about a fellow who invents a gene therapy agent that can arrest the aging process. I go into a lot of detail in the book about how it could be done. There seems to be a limit to everybody’s lifespan, and in the book, what I proposed was that that clock was not telomeres or anything like that. It was what they call methylation of DNA. There’s a lot of details like that in there, and I actually explain how you might create this gene therapy vector, what it might look like and how it might function and how it might stop the aging process.

How did you end up coming to Worcester?

At the end of medical school, you go through an interview process for a residency, where you learn your actual specialty. It gave me a chance to explore a lot of parts of the country that I had never seen before, so I had interviews in Seattle, Iowa, Missouri, and out here, and things just clicked when I came out here. I liked it, my wife liked it, they liked me, and I’ve stayed ever since then.

I love Worcester. It’s a quieter area and people are more down-to-earth and relate to you better. It’s easier to have friends that you do things with, and it has a lot of culture. You’ve got The Hanover Theatre and Mechanics Hall. You have a lot of good high culture, you have great restaurants, all kinds of ethnic restaurants that are just wonderful and give you a lot of variety. (He gestures at old buildings visible through the window.) Worcester is a pretty town.