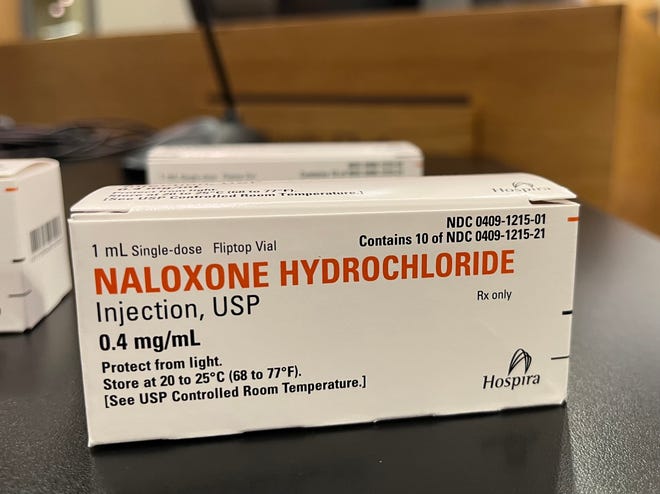 Austin Public Health, the city of Austin and Travis County on Monday declared a public health crisis over recent drug overdose deaths in the area.

Travis County has seen overdose deaths double in the first six months of 2022 compared with 2021, and it has seen more of those deaths linked to fentanyl, a synthetic opioid that is 50 to 100 times stronger than morphine.

Austin Public Health has secured 9,900 doses of naloxone hydrochloride, a nasal spray that reduces the effects of an opioid overdose, from the nonprofit Direct Relief. Naloxone hydrochloride is the generic form of Narcan. That medication will be given to Texas Harm Reduction Alliance to distribute it for free to opioid users, much as it distributes needles to IV drug users.

Austin Public Health and Travis County are also working with Austin Independent School District to give school nurses naloxone. Austin police and EMS ambulances also carry it. During the Austin City Limits music festival, they distributed naloxone to bartenders at the event. They will continue to make it available to bars in Austin.

Austin Public Health is also asking local pharmacies to order naloxone hydrochloride to carry it on their shelves for people to gain access to it without a prescription.

Travis County plans to order another 8,000 doses through $350,000 in funding. It has received 800 so far. The city of Austin is also planning on increasing its funding and is scheduled to take up a resolution on Thursday, Austin Mayor Steve Adler said.

The crisis with fentanyl was being predicted two years ago, Adler said, but had not yet hit Austin yet. Now it has, he said. “Our numbers have increased,” he said.

“What is troubling is the age,” Walkes said, noting that often it is happening in children and teens who either get access to a family members’ medication or by someone selling pills.

“They get it illegally,” Brown said. “Often they do not understand there is fentanyl with it.”

Walkes said they are also seeing opioid use in people who are prescribed it for pain and misuse it, people with mood disorders, veterans with post-traumatic stress disorder, executives with high-level positions, anyone facing life stress.

“There’s been an increase in pain that has been suffered as we’ve gone through the pandemic,” Walkes said. “They take them to make them feel better; that’s understandable.”

Walkes recommends: if you see someone overdosing, call 9-1-1. If you have access to naloxone hydrochloride, administer it, but still call 9-1-1 to get emergency treatment. Because opioids like fentanyl suppress breathing, the person will need follow up treatment, not just the naloxone.

Walkes and Brown recommend people who are prescribe any opioids for medical reason get kits at their pharmacies to safely destroy any unused medication. In the state of Texas that is not required as other states have required it, Brown said.