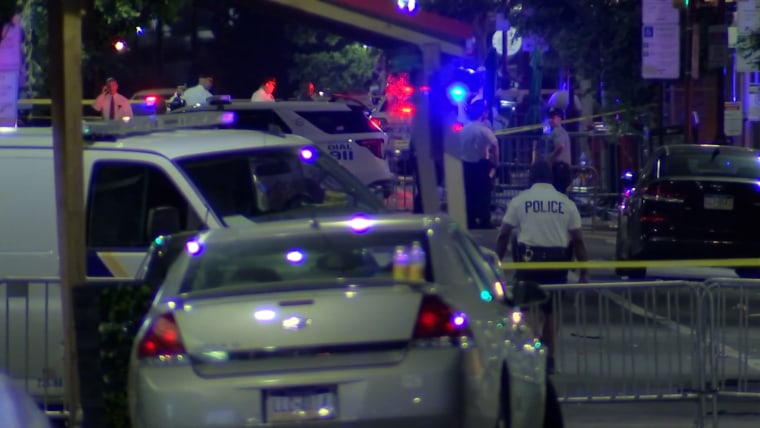 The first weekend of June marked a greater number of mass shooting deaths in the United States than the previous three-day weekend, which ended with Memorial Day.

The tally for weekend violence through Sunday night was at least 12 killed, and at least 38 injured in mass shootings, defined by the Gun Violence Archive as an incident in which “four or more people are shot or killed, not including the shooter.”

During the holiday weekend nine were killed and more than 60 were injured in attacks fitting that definition.

As Americans debate the possibility of new gun regulations in the wake of the horrific Uvalde school attack, gun violence seemed to continue unabated with the official start of summer, June 21, and its hottest nights still ahead.

The most notable violence this weekend took place in Philadelphia, where three were killed and 12 were injured; and in Chattanooga, Tennessee, which saw its second weekend in a row of mass-shooter violence, this time with two dead and 12 others injured from gunfire. A third person died after being struck by a car.

In Clarendon County, South Carolina, a late Saturday graduation party outside a residence was interrupted by a drive-up shooting that may have involved two vehicles, the sheriff’s office said.

A 32-year-old woman struck by gunfire died Sunday morning, it said. Seven others, including children ages 12 to 17 and a 36-year-old, were injured, the office said.

The violence might have been gang-related, the Clarendon County Sheriff’s Office said in a statement.

“There were at least 60 to 70 rounds fired at this incident,” it said. “It is not clear, as of yet, if some of these rounds may have been return fire from some of the subjects at the party.”

In Saginaw, Michigan, early Sunday, a shooting killed three people, including two men at the scene and a woman who was hospitalized but did not survive, according to NBC affiliate WEYI of Saginaw.

Two men injured in the attack were hospitalized, the station said.

In Mesa, Arizona, early Sunday, two people were killed and two others were injured in a shooting at a nightclub, NBC affiliate KPNX of Phoenix reported.

Three suspects who allegedly sped away in a vehicle were chased by officers and ultimately stopped and arrested in connection with the attack, the station said.

Two men were pronounced dead at the scene. The injured, also at the venue, were hospitalized with non-life-threatening injuries, authorities told KPNX.

In Bibb County, Georgia, Saturday night, sheriff’s deputies responded to reports of shots fired at an abandoned home and found four people down, including 19-year-old Cleveland Raines of Macon, who later died at a hospital, the county sheriff’s office said.

Three other victims, named as 19-year-old Ralph Hughes, 23-year-old Jarvis Devon Hill, and 22-year-old Alizya Sinclair, were said to be stable at medical facilities, the Bibb County office said in a statement.

Origins of the attack were under investigation.

In Phoenix, Arizona, early Saturday, a 14-year-old girl was killed and eight others were injured when an argument between multiple parties escalated with shots fired at a party.

About 100 people were at the party inside a strip mall building in the area of 10th Avenue and Hatcher Road, Phoenix police said.

The shooting took place inside the building, in the nearby parking lot and the roadway area, police said in a news release. When officers arrived, they found attendees fleeing in different directions from the parking lot and multiple victims at the scene and nearby.

Shannon Watts, founder of the group Moms Demand Action, which seeks to curb gun violence, noted on Twitter that the violence isn’t abating.

“Last month it was New York, Texas and California,” she said. “This weekend it’s Pennsylvania, South Carolina and Tennessee.”

In an address to the nation Thursday, President Joe Biden called on Congress to act on proposals to curb sales of semiautomatic rifles like the AR-15, developed for the military.

Though the weapon has been used in some of the nation’s worst mass shootings, authorities in the weekend’s attacks did not single out this style of weapon as a culprit.

The president’s plea came after 19 children and two teachers were fatally shot at an elementary school in Uvalde, Texas, May 24. On May 14, a gunman allegedly motivated by racism and hatred killed 10 people at a grocery story the heart of the Black community in Buffalo, New York.

Friday was recognized by a number of nonprofits committed to reducing shootings as National Gun Violence Awareness Day.